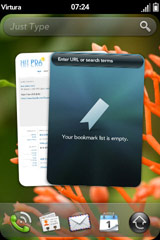 Last week's big story was the public emergence of the first concrete details about WebOS 2.0 from the HP/Palm camp. These tidbits have now been bolstered by a series of leaked WebOS 2.0 screenshots that apparently originated on a Chinese WebOS enthusiast site Webozi (now removed but still available at engadget).

First, a brief overview of some of the coming enhancements for WebOS 2.0: a few highlights of WebOS 2.0 were announced on Palm's develop page. The first is "Stacks", a natural extension of WebOS' existing card-based multi-tasking metaphor. Stacks will group related cards in separate stacks, making it easier for users to juggle multiple open programs simultaneously.

Another new feature that is an improvement of an existing WebOS 1.x feature is "Just Type". Basically a refreshed Universal Search, user-initiated typing triggers the appropriate app or function, such as a creating an email, searching the web, or updating a social networking status or feed. Developers will now be able to tie into this functionality as well.

Additional WebOS 2.0 features are less exciting but still welcome additions, such as "Exhibition" mode for devices attached to a Touchstone dock. This appears to largely be a response to the popularity of the increasingly complex dock modes found on the latest generation of Android 2.x handsets.

The leaked WebOS 2.0 screenshots don't reveal any revolutionary new UI changes or overhauls but rather reinforce Palm's claims that everything has been expanded, improved, and enhanced. A unified Synergy account manager is present, along with support for more services such as Dropbox, including the rather puzzling inclusions of Skype and MobileMe. Also, a much-needed overhaul has been given to the phone app, with GSM Treo-style icons at the bottom for switching between voicemail, favorites, contacts, and the dial pad. Finally, the Quickoffice WebOS integration, all-but-confirmed with last week's story, is now confirmed as the replacement for the departed Documents To Go.

The full sneak preview of WebOS 2.0 can be found on Palm's Developer Page.

iPhone 4 and iPod Touch with 200,000 apps + effortless video calling with Face Time versus WebOS2 with crappy hardware and 2000 apps.

You made an excellent point...
At least now the parent company is HP...
Let's wait and see how far HP can push the Pre and the crappy WebOS.
I've been a Palm user since 2001 and have been very happy about the late PalmOS...
About 3 times faster than WebOS, True Universal Search (I don't know why they call it universal on WebOS if it does not have the capabilities of searching inside profiles, calendar entries, and notes, ect.) and Shortcuts.
I'd be happy if WebOS 2.0 can have all of the mentioned above.
I'd really wouldn't care much about the apps...
I'm very disappointed on Palm...
Being with AT&T for 11 years now, and reluctant to switch to the iPhone or a RIM device or even the late Android (which is growing incredibly), I have chosen to continue my lealty to Palm believing they would come up with very good version of a OS.
Now, don't nobody get me wrong, WebOS has it's good features too and I'm very used to it but I believe it still sucks.
I will wait until the next Palm device then I'll decide if I keep Palm or go with the iPhone.

Robert,
You make valid points about the non-universal-Universal Search. Surely, Palm will not keep driving with their hands over their eyes on that one. The OS is pushing the underclocked OMAP to hard for the device to be snappy. But that brings me to the greatest benefit of WebOS.

Preware and the Homebrew community. For the "fat middle" or average consumer, they will never hear of it nor use it. But Preware has transformed my Pre+ into a muuuuch better device.

Just today, my close friend came over with he and his wife's new Pres. He (like most) is clueless about anything more than a simple app catalog. In a few hours I had both Pres loaded with about 30 patches and homebrew apps that radically improve these devices. They are screaming fast and stable at 1ghz and now have many "Palm should have done this in the first place" patches.

Palm supporting the homebrew community and allowing such openness is what has encouraged me to stay put. Android just seems so non-elegant when I use it and iOS is as closed as a frigid woman.

Like you, I'm hopefull that HP will breath new life (read $$$) into the platform and give it a larger market footprint which will bring more development to bear outside Palm. Palm has done pretty well at squelching fragmentation, yet has left it open.

In a month we should see some decent hardware running OS2. I'm excited and will upgrade my Pre as soon as possible if so.
Pat Horne

Patching and hacking classic Palm OS led to it's instability (and contributed) to Palm's inability to make large scale improvements to it.

At some point, HP will lock things down just as much as Google, WP7, and iphone have.

I'm looking forward to see if some of the "old HP" will return and build a kick ass product (but not holding my breath). In the meantime I'm still following Jeff's theories on HTM & the brain, here's my latest simulation of how our vision system might work, all pre-wired by nature...
http://www.youtube.com/watch?v=eraWdCz23Ps

"But that brings me to the greatest benefit of WebOS.

Preware and the Homebrew community."

Please tell me you're kidding.

The best part about webOS is having to hack it to fix all of the missing fuctionality that Palm was incapable of including in its own OS? Wow. That's some serious rationalizing you're doing there.

Having to overclock the Pre just to make it (barely) usable is beyond ridiculous in 2010. Shipping webOS with PIM apps that can't even compete with a 1999 Palm III is inexcusable. And shipping webOS with shoddy hardware is proving fatal to Palm.

Time to throw in the towel. webOS is the modern equivalent of OS/2.

I could 'ave been a contendah...

LIVEFAITH,
Would you do to my Pre what you did to your friends?...

do yourself a favor and take your Pre outside behind the bar and put a bullet through it.

why in the hell in 2010 do you want to have to hack, scratch, fight, pull, patch, cobble, and smash together no less than 30 hacks in order to get a phone to be usable? and what kind of shiittty battery life do you get after all that when you start with such shiiittty battery life to begin with?

Palm is doomed. why?

Why webOS will live

The psycho doubters can go drool in the corner with their spiritual brother, Lefty of ACCESS.

RE: Why webOS will live

are you that naive and gullible?