Another round of Treo Pro spy shots has been posted on Chinese Treo enthusiast site treo.net.cn. This time around a high quality digital camera was employed to take nearly 20 pictures of the Treo Pro from nearly all angles. They even throw in a number of comparison shots of the Pro next to the Centro and a Treo 650. In addition, the detailed shots also help to confirm a number of specs and details.

Read on for some of the full shots and spec recap or checkout the full thread at WMExperts.

For starters, the device's 400mhz CPU is confirmed, with the tipster reporting its performance as "snappy". The Treo Pro has 256MB of ROM with 128MB of RAM. Furthermore, any fears that it would have a fixed battery ala Apple's iPhone are laid to rest, as several shots clearly show the battery out of its well with the back panel removed. The battery has also been confirmed as a true 1500mAh unit, but the battery's wrapper does not indicate if it compatible with the Centro and Treo 800w as well.

In what may be a crucial detail for many, the 850/Pro QWERTY keyboard appears to be a cross between the Centro's tiny single-piece straight design and the individual keys traditionally found on Palm's Treos.

As reported over seven months ago, the GSM Treo 850/Pro does indeed have a flush-mounted 320 x 320 touchscreen. On the wireless front, Wi-fi and GPS are definitely included alongside the legacy IR port, just like the Treo 800w. Finally, the 3.5mm stereo headphone jack is indeed present, making it the first non-PDA device from Palm to have standard headphone output functionality. No pricing, carrier availability or release date is mentioned in any of the newly-leaked info. 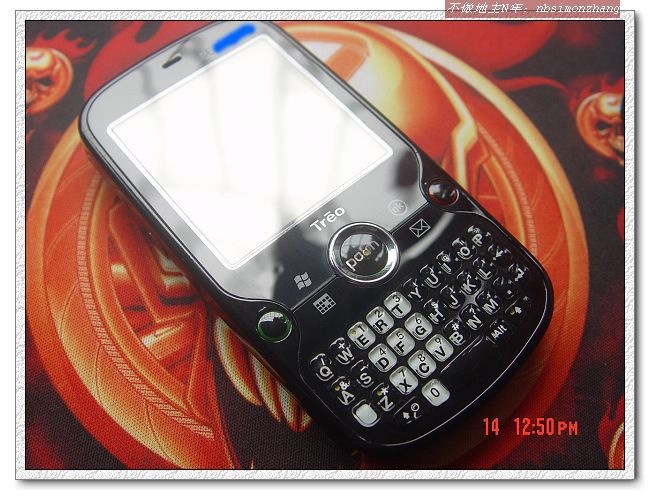 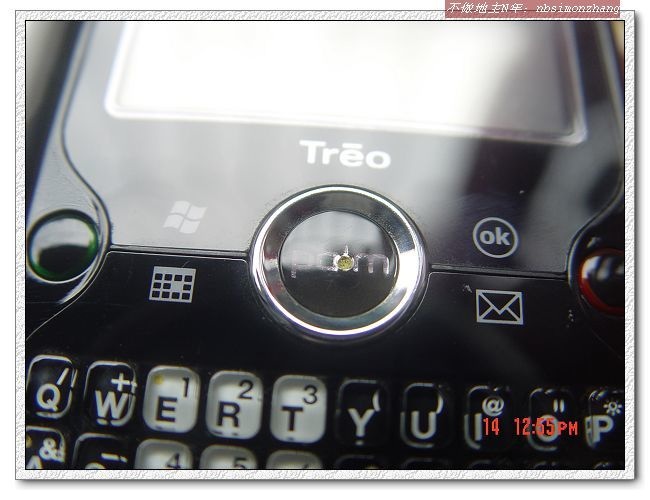 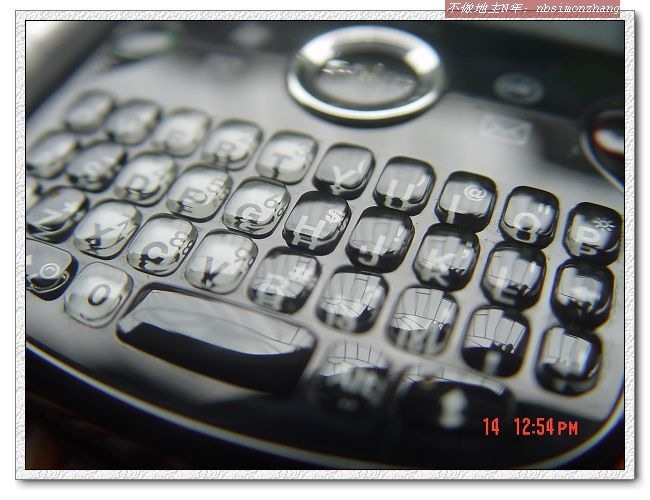 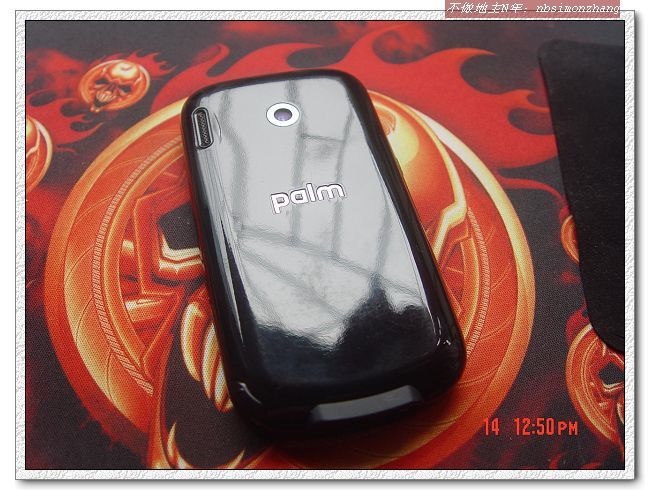 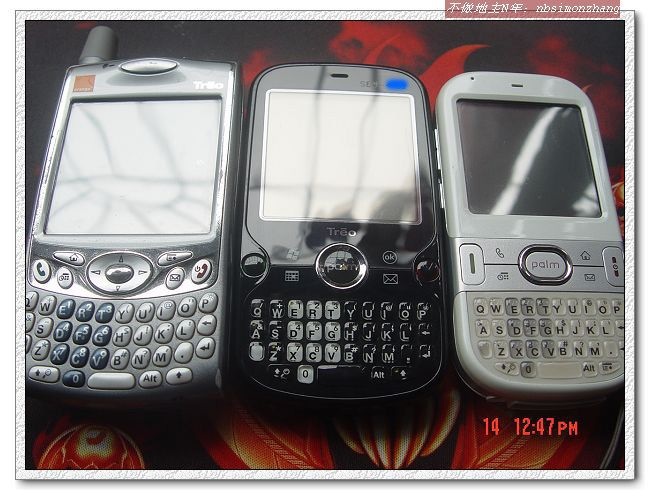 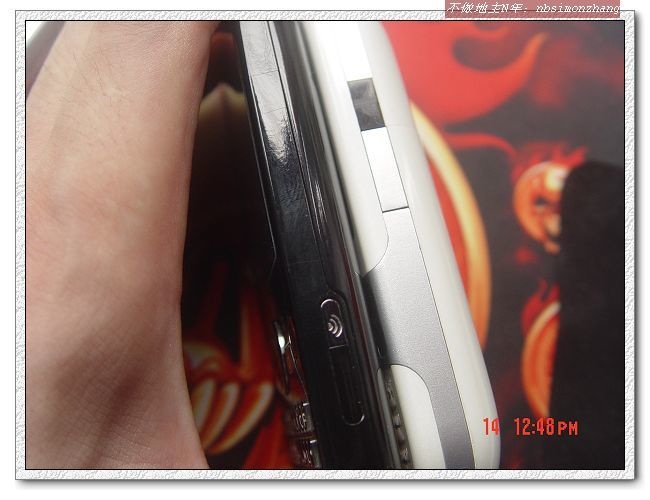 Treo Pro side by side with a Palm Centro

Palm is apparently exhibiting at DigitalLife NYC next month.
http://www.digitallife.com/newyork/

RE: Attention, People of Earth

Ho-hum. Yet another Windoze Treo. The Fisher-Price version?

The piano black case is slick, but how slippery will it be?

And it looks like the touchscreen seems flush with the case, leading to even more scratches/busted displays? It DOES have a touchscreen, right?

Wake me when PalmOS 6 is released and debugged.

RE: Attention, People of Earth

You may have to hibernate in a casket for that joad.

Someone of the Palm test group, or whoever's this Treo is must have pushed on the D-pad really hard. Or is it so cheap and fragile?

Looks like a wee bullet hole in the palm logo!

Well some corpses have bullet holes.

Will we ever see another PalmOS Treo?

Not that I really care because my Centro already meets/exceeds my expectations, but do you think Palm will launch one final Treo based on Garnet? I think it's been said before, but it would be a great final sign-off for Garnet for it's last model to have Wifi, bigger DBCache, and a 3.5mm headphone jacks (sadly things the 700p and 755p SHOULD have had :-( )

Seems like there would be a market for it for dumb-phone users that were snookered into the smart-phone crowd with the Centro, but want something with a little more power, bigger screen, etc. Although the fact that probably 90% of the Centro buyers are locked into a 2-yr contact probably blows up that potential... Guess we'll see.

Palm's essentially said that there will be no more OS5 Treos. No NOVA (HAH!) Treos either. "Treo" as a product line is entirey WinMob from here on. "Centro" is for legacy Garnet 5.x smartphones and there will be presumably be a new line created for the Nova-based products (I nominate "Veld").

That said, the Treo 850/Pro IS the most Centro-like Treo yet. It would NOT be hard for Palm to utilize that basic formfactor and stuff the Centro's optimized/downsized innards into it.

Such a device ("Centro Pro"?) could presumably still improve over the existing Centro in several ways just from a physical hardware perspective that isn't bogged down the by limitations of FrankenGarnet:

-3.5mm headphone jack (should have been a no-brainer on the first Centro IMO)
-Better build quality/styling
-Slightly larger keyboard & screen
-Possibly higher capacity battery (or at least make the 1500mAh battery available for purchase as an accessory)
-Possibly microUSB (though Palm may try to keep Athena on to not burn existing Centro owners and phase it out alongside Garnet)

That'd make for a great way to send off Garnet and nicely bridge the gap between OS 5 and Nova.

It ain't gonna be no Centro-style, IMHO...

The full retail pricing of the 800w is $599.99 IIRC.
So figure on an unlocked Pro going for about that much, if not more.

I figure it'll go for $100 more than the 800w in the US market w/ 2yr contract (assuming it's carried by AT&T and subsidized accordingly etc). I'd also count on a non-US debut for the Pro (ala the 750v-and possibly called the Treo 850) before it arrives Stateside with a slightly lower price and possibly rebranded as the Treo Pro.

RE: Will we ever see an ALP Treo?

Will we ever see an ALP Treo? why isn't Palm all over ALP????

It will be Roteo according to a reliable source ...

Roteo turns into a cross?! The Jesus Phone?!!?

You saw it here 1st. Only believe.

Hey, LiveFaith! It will be roteo.

RE: Will we ever see another Nova device?

Giggle...TreoCentral, the ones who think the Centro Claus ad campaign is a win, think this is a Palm device, too, and are waxing poetic about it...:

Dont neglect to see the link to the rest of photos. Wow, I am impressed by this Palm. Especially amazing the bottom shot showing the stunning 3.5mm audio ... that a baby!!!

I like the way the "leaker" painted out with blue color the serial number, etc inside the battery compartment but didn't paint out the bar code that represents that serial number etc.

Looks like someone either officially "leaked" these photos or is simply too nonobservant to notice the little yellow dots on the keyboard uniquely identifying the unit:

If I were Palm and these are NOT officially "leaked" (Lol! Oh sure, they're not official!), I'd REALLY not want someone who is SO clueless to be a betatester REGARDLESS whether they broke an NDA or not!

[someone around PiC already noted those dots - these images, however, VERY clearly show them]

I suspect these were sanctioned leaks as apparently Palm has not sent any C&Ds or other takedown notices. Makes we wonder if the Dmitry thing was a smokescreen.

"Many men stumble across the truth, but most manage to pick themselves up
and continue as if nothing had happened."
- Winston Churchill

Look, everybody is designing mobile devices using the same chip sets and they're all manufactured by the same factories in China and South Korea. Everyone has to support Windows Xp/Vista too -it is a plague on humanity. In other words, whether it's Samsung in Seoul, HTC in Taipei, Palm in Sunnyvale or Apple in Cupertino -they are all outsourcing manufacturing now to the same people and buying their chips from the same people and providing drivers to sync with Windows. They compete on their form/function/margin within the constraints of what can be done IN SOFTWARE with those chips and IN HARDWARE with those manufacturing plants. If you don't have your own software like Mac OS X (iPhone/iPod), you can license WindowsMobile for $5 or run Qualcomm BREW, but if you do, then you're down to just competing based on form (hardware) and margin (cost) -and if you are based in the USA (where design/operations overhead is higher than, say Taipei or Seoul), you can forget about competing on margin, you are down to just competing on "form".

So how can you describe what Palm is doing in lowering themselves from a major leader in the form/function/margin of smart phones and PDAs down to the level of being just an ODM of Chinese manufactured imports that competes only on "form", plus missing their numbers (horribly) by embarking upon this self-destruction? Isn't it just looting the brand's equity until the shareholders are left with no real value? Shouldn't someone be investigating to see if those managers who decided this path have any new yachts or kids in college or off-shores accounts paid for with money from those who have directly benefitted from this looting? Wouldn't "Nova" be the perfect smoke-screen to blow once ALP became so real it was shipping on Nokia's devices?

I don't know if CalPERS is in Palm, Inc. or not. I do know it took CalPERS to finally go into Apple and clean house before the Board brought in the people from Rockwell who then brought Jobs back and turned the company around. If there is no major powerful group of shareholders in Palm, Inc like CalPERS already, and nobody like Carl Ichan, Sam Zell or Kirk Krikorian want to take up the cause, then the bad guys are going to get away with liquidating the brand unless they slip up and cross the line legally.

Maybe if Palm, Inc. sells itself to Microsoft it would legitimize what they've done -though that will infuriate many of their millions of users, at least their shareholders will be protected from further loss.