Palm promised the world some "new-ness" today in Vegas and they certainly did not disappoint. Alongside Palm's revolutionary new WebOS, Ed Colligan and Jon Rubinstein showcased Palm's fantasntic new smartphone designed to run the new operating system. While we have not yet had any hands-on time with the device, Ryan and I were seated on the 2nd row during the presentation and got a very good look at the unit.

Stylistically, the device has smoothly rounded corners reminiscent of some of the earlier HTC smartphones. It basically mimics the Treo Pro's design aesthetic, but has a much less "busy" front bezel. Most of the hard buttons have been removed, with the exception of a single button located underneath the screen. Not much was said about this feature but it's presumably some kind of scroll wheel analogous to what is found on the HTC G1 or the BlackBerry Trackball. The traditional Palm ring/mute switch is thankfully present, and the power button is a dual-function design similar to that found on the Treo Pro. 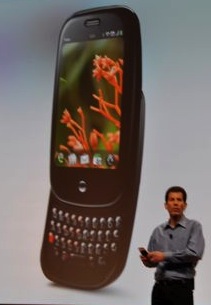 The device appears to have a slight curve in its lower body. Again, it's reminiscent of the HTC G1 in this aspect. The major surprise was the confirmation of the slide-down keyboard. It was glossy black with the traditional Palm orange highlights. The keyboard appears to be a bit wider than the conventional Palm Treo keyboard and the "smile" shape is retained; it is, however, somewhat less pronounced in its "smile" and the key spacing actually appears a bit wider than my Treo 755p I was using for comparison purposes.

Moving around to the rest of the device, a 3.5mm headphone jack is thankfully present up top, continuing a positive trend begun with last year's Treo Pro. A micro-USB port is found on the right-hand side In what is a Palm first since the days of the LifeDrive & Tungsten T5's "Drive Mode", the Treo Pre will fully support mass storage compliant for loading media onto the devices' 8GB of onboard flash. Unfortunately, no option for a microSDHC slot was mentioned or seen anywhere in the entire presentation. Perhaps Palm is borrowing too heavily from Apple's playbook with non-expandable storage?

The LCD measures 3.1" diagonally and has a resolution of 320x480, the same found on Palm's former large-screen Garnet devices such as the TX, T5, LifeDrive and T3. While we just found this out now, the screen supports 24-bit color, which is apparently a huge step above Palm's previous best of 18-bit on the Tungsten E2.

Below the screen is an interesting area that is part of the touchscreen area devoted to input. This zone seems inspired by the original Pilot's silkscreened Graffiti input area. It is where all of the finger pokes, jabs, swipes, and gestures take place. From the initial demos we saw, the multitouch aspects of WebOS work extremely well. 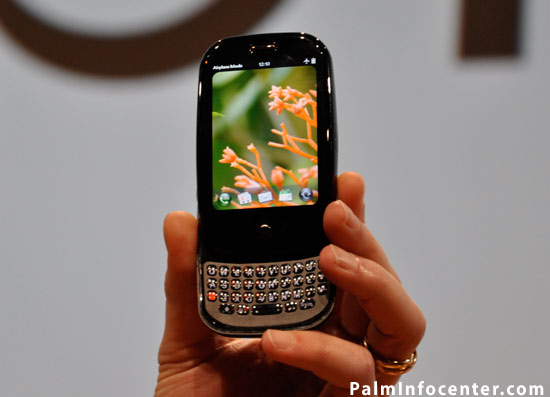 Internally, not much said about the device's innards, aside from the fact that is fully GPS (no word on being unlocked, of course) capable, 802.11b/g is supported, a 3megapixel camera with "DSP functions" (Ed's words) and a LED flash assist light. Native multimedia support looks sharp, if nothing revolutionary. Certain a step above the crusty old media apps Bluetooth 2.1 + ADR +A2DP support is finally onboard, so no more Softick Audio Gateway headaches.

The device also has a built-in accelerometer and a light sensor. I was STUNNED to see no lag whatsoever during multitasking, app switching, or screen orientation changing. The CPU appears to be quite impressive, as it was mentioned to be the latest-gen TI Omap. 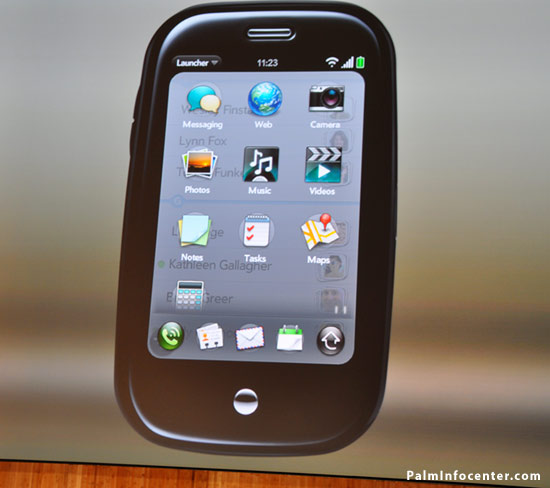 As far as omissions, here is what I did notice as being notable.

very minor and rare to find on other phones.

The Palm Pre looks great I want it! But I'm sure it will have a pretty price tag too. Hopefully Palm releases some lower end devices running webOS soon! Anyone know if webOS will run older Palm programs?

If you guys get the chance to talk again with anyone at Palm who will listen, you should push for a microSD slot. If they really want this to be an effective media device, they should make expandable storage available. That is, unless they make the device capable of Hulu playback and streaming of music from a subscription service (like Rhapsody) available.

If they got video and music streaming nailed down, I for one would welcome my new webOS overlords.

One of the partners that were mentioned was Pandora, so we know it will at least have audio streaming built in to some degree. I wouldn't be surprised, then, to see video streaming of some sort.

I really think this could use a SD card slot, if any of you have seen the new SDXC cards, you'll be drooling over the new memory capabilities. http://www.sdcard.org/developers/tech/sdxc

There's better be some hands-on experiences for me to check out when I check back in!

Or better yet... can you steal me the demo unit?

Of course you can migrate it. palmDesktop supports csv exports, and outlook+everythingelse supports csv imports.

The last thing I want to do is migrate anything to that mammoth Outlook. I want a Pre with Palm Desktop - the best PIM there is!

I agree. I think the Palm Desktop was/is more of a strength to the platform than many people give it credit for.

Outlook is bloated and slow and cumbersome. The Palm Desktop, while not perfect, is quick, has a smaller footprint, and does the PIM thing simply and smoothly.

I too have no desire to leave all my data out there in "the cloud", whatever exactly that means. I, like many people spend hours a day in front of my laptop... I enter a good amount of PIM data while on the phone at my desk or working on other projects at my desk... I don't always have access to the web and don;t want to store all my PIM on the web even if I could.

There is still a need for a good, robust PIM manager on your PC or Mac separate from "the cloud".

Great summary. I agree about your omissions. The only two that bother me at the moment are the lack of SD slot and unresolved question about backwards compatibility with Palm OS Garnet apps.

I'm looking at video of the presentation.

The slot is hidden top right of the back *under* the lid. No open slot. It's internal and requires the back to come off (as with changing the battery).

Eh. Not sure I mind having to take off the back for card access.

i thought i saw that there was a microSD slot during the treo central cover it live.

BTW - this is great technology -

Palm's own specs do not list a card slot at all.

Welcome to iPhoneLand, Gekko. Your nightmare has begun!

i think i confused microUSB and microSD.

I too thought the right side slot was a microSD slot.
I have not seen the bottom side yet - I figure that is where the microUSB connector is?

I seriously hope there is a card slot - I backup to SD. While backing up to the cloud is a nice/vital feature, it is not ALWAYS available - like in some locations without EVDO or other G3 coverage, or if a CDMA phone user takes their Palm to the EU!?!?
I want to KNOW that my calendar, contacts, memos, etc, are all backed up at ALL times!

Besides - which would you rather do during a "cattle-car" class flight:
Unpack a laptop and tether up my smartphone via USB to download videos or hours of audio books, or pop in a preloaded card???

PAY ATTENTION PALM! MAKE SURE THERE IS A CARD SLOT!
And make sure it is passed through as a USB mass storage device.

I do not see any card slot in Palm's own spec sheet. Does anyone?

Completely agree about needing an SD card slot, that's the only limitation of this device, it seems to have every feature I could dream of and I don't want to be limited by my memory. Especially with these new SDXC cards coming out! http://www.sdcard.org/developers/tech/sdxc

Someone who has contact with someone of status from Palm, PLEASE bring this up!

RE: Anyone notice this?

RE: Anyone notice this?

In short, I had always believed that the world involved magic: now I thought that perhaps it involved a magician.
- Chesterton