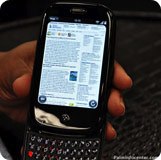 Rumor: Word is making its way out late this weekend that Best Buy retail stores may obtain a shipment of Palm Pre's for what the Boy Genus Report is calling a "trial launch" on June 7th. The site is citing an unnamed source though they also provide some additional plausible details to add to the claim.

BGR source states that the stores will receive a direct shipment of Pre's from Sprint, however it looks to be a very limited rollout as Best Buy will have to spread out an allotment of 4,500 Pre's across the country. They also claim to have some pricing info, stating that it will sell for $199 with a 2-year contract, $299 for existing customer upgrade and a whopping $999 sans plan.

Gotta test those WebOS servers with a reduced albeit much higher than already tested load?

Or are there only 4500 early-adopters willing to spring for an untested device/OS/webserver combo right now?

Only 4,500?? I guess Apple really did buy up most of the flash supply.

With those numbers, the Pre is effectively DOA. Especially with launching (almost) concurrently with the 3rd gen. iphone?

There is a ceiling for the Pre, and it's 2nd place - let's be realistic about it.

I have a feeling that $999 price is just a temporary placeholder price. Perhaps they are going to require that all initial Pre sales require a new contact or a current contract extension, ala first 20 months the iPhone was on the market.

Now, If the $999 price is NOT a mistake and is indeed correct then we'd better start preparing our Palm eulogies.

Don't underestimate the significance of that $999 full retail price. While it's a tiny, miniscule group of users, there ARE people that buy CDMA phones for full retail price. These are usually the early adopters who buy a phone, use it a few months, then sell it to mitigate the cost of their next handset purchase. It's one thing to clobber those users with the usual $450-$600 retail price for an unsubsidized CDMA phone, as we have seen on Treos past. But for Palm to have the gumption--nay, the ARROGANCE--to charge a cool grand for a handset that in many ways lags behind a Centro is just ridiculous.

Ceiling for the Pre is 2nd place? Only in Colligan & Elevation partners' (wet) dreams! More like 5th place, especially if all of this pricing and availability tomfoolery continues.

How can a cognitive forum thrive with incessant doomsday prophecy?

Because this site is comprised (mostly) of REAL users relating their REAL world experiences. Most of the people here are long-time Palm veterans and have watched that company teeter on the brink for the better part of the past decade, alternating between minor successes (Centro, TX, Treo 650) and outright failures (LifeDrive, Fooleo).

Most of us (at least me) WANT Palm to succeed. However, they usually end up just sucking.

It would be just cheaper to sign up for a new Sprint line/contract, get the cheap Pre for $199, then cancel the contract ASAP and pay the ETA and keep the Pre. That's STILL cheaper than $999.

The Pres seen at CES & CTIA seemed to be very snappy and blindingly fast at times (launching apps, rotating the screen, flipping thru cards). Yet the early hands-on reviews of production Pres say that it can get laggy. Did it get bogged down from adding more stuff to the final production ROM? Were the early demo units overclocked/tweaked/optimized in order to impress the press and get a favorable early buzz? Or does Palm already have a mildly refreshed "Rev B" hardware/OS waiting in the wings?

How can a cognitive forum thrive with incessant doomsday prophecy?

I often wonder the same thing. Myself, I like Palm, and I reckon Pre and webOS are going to be a happy success for them. I don't particularly care whether or not they sell trillions, so long as they make a user-friendly device that I enjoy using. Pre looks like it's going to tick that box and then some.

The Bot Genious Report "article" has been totally poo-pooed by that Sprint Insider guy.

[and the above post is why I want "Edit" and why I shouldn't type in the dark...]

It now being the next day, I'm glad to see this debunked.

It would be absolutely disastrous for Palm to pull something like that.

When the iPhone was originally released, there was more than enough for *everybody*. NO ONE was DISAPPOINTED. This kind of "beta" release would leave a bad taste in everybody's mouth.

And no, I wouldn't line up for a shot to buy *one* Pre that a store might or might not have in stock. I have my limits, dammit.

Why be a beta tester?

Why would you want to buy this when the EOS is right around the corner? Compared to the EOS it is a brick. As the first Web OS device it's likely the buggiest.

Remember the m500 was quickly followed by the 505 then the 515, which should have been the only release.

Of course, if you are relying on Palm to provide updates for it you have been living in a vacuum. Palm calls it's ROM updates "the next model."

>>>Palm calls it's ROM updates "the next model."

But people have now seen how Apple handles updates and will expect Palm to follow suit.

For Palm, I guess "quickly followed" really does mean "after about one year."
-alan

Why would you want to buy this when the EOS is right around the corner? Compared to the EOS it is a brick.

There's always another new device around the corner. You follow that philosophy long enough and you'll never buy another phone again.

With Palm, a "new device" is around the corner far less often than with most companies. Depending on your perspective, this could be a distinct pro or a con.

I remember very well when they were released. The m500 arrived about a week sooner than the m505. I had one of the very first m505s in my part of Ohio. I went to the Circuit City with the package # of the m505s that had been unloaded from the truck that very day and the employees didn't even know they had the thing yet. This was of course long after I had my pre-order in at Palm. It was tempting to buy a 500 to get OS4.

Maybe they were released at the same time, but the m500 showed up first. That month was the most exciting ever in the Palm Kingdom and will never be duplicated.

The T|T promised sooooo much.....video playback, a decent directional pad for gaming, mp3/digital audio, high-resolution, a snappy, stable new OS (giggle), and eventual wireless capabilities in the form of BT or wi-fi (giggle again). I remember driving home from Best Buy and literally fondling my uncharged T|T while sitting in rush hour trafffic and marveling at its metal body and elegant slider (triple giggle). One review or perhaps even Palm at the time called it the "BMW of handhelds". Then I got home to charge it and realized that there was a crushing dearth of native OS5 software, the damn RealPlayer wasn't bundled with the device (or even available at all to download) and the slider started wobbbling. It's sorta all been downhill from there over the past 7 years...

I would vote for the release of the NR70 and NR70v. Sony had been cooking up some crazy handhelds in the years leading up to it (T615c, etc), but these were the first handhelds that really showed the capabilities of Palm OS if the manufacturer put in the effort. HVGA, keyboard, MP3 player, video playback, camera, and crazy twisting. That was cool.