Rumor: The Boy Genius Report has posted something that looks to be a Internal Sprint schedule for events and training around the Palm Pre. Although the authenticity is not certain, if accurate the document could help solidify the rumors regarding the June 7th Palm Pre launch timeframe.

The internal memo lists a schedule for what appears to be employee training sessions and presentations. The most telling detail is that the only event listed for Friday, June 5th is the "LAUNCH LUNCH!" While Sunday has been the traditional Sprint launch day, with the Pre being such an anticipated device they could likely be planning for a Friday afternoon release. The full memo is mirrored after the break. 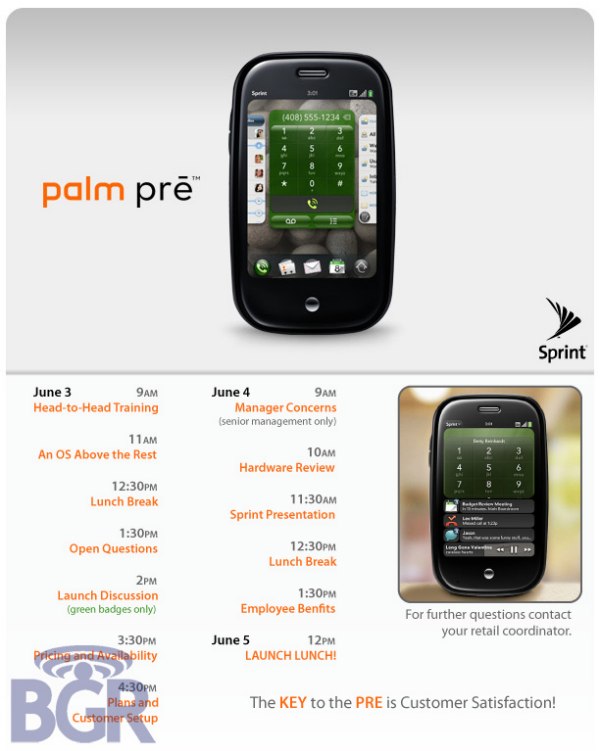 What does the green badges only mean?

Some companies use badge colors to signify employee "class". When I worked at Blue Cross Blue Shield of Texas, there were three colors in use: blue for hourly clerical, red for technical and management, and gold for executives. I was a "red badge", while my wife (who also worked there in a different position and department) was a "blue badge." We ate lunch together in the cafeteria all the time, and other employees who didn't know us sometimes gave us funny looks -- red badges aren't supposed to fraternize with blue badges. Seriously!

OMG, this is sad!

(not you eating with your wife of course, but the reaction to it)
---
"home is where my computer is..."

Since a while, I got a feeling, the Palm Pré Launch could be a birthday surprise for me. (As I got birthday on June 5th.)

I still believe, it will turn out this way somehow. ;-)

The only bad thing about it is, I live in Europe. So I would possibly have to wait a little longer to get my hand on a Palm Pré. :-(

However, the sooner it is released, the better. :-)

RE: A birthday surprise

...it will be out for trial here mid-June to make sure it works with our current systems for email and notifications and then out company wide the next month.

So we're being told June...which should be about the time my Treo finally croaks.

If it turns out to be June 5 (or June 7, if they launch on a Sudnay), that would be decent timing for my purposes. I'm due for an upgrade on my phone on July 26, so this gives me more than a month to survey the Pre's reviews and decide if I want to abandon AT&T for Sprint.

I might actually end up abandoning AT&T anyway. The only phone that has caught my eye other than the Pre has been the Blackberry Storm. (I got some hands-on time with the iPhone yesterday, and I wasn't very impressed with it. The Pre's interface (as represented by TealOS) seems a lot slicker. I didn't have enough time with it to really judge the virtual keyboard, but that looked like it would take some getting used to, as well.

I owned a Storm for 2 days. It was SOOO bad that I went back to my dumbphone + 755p combo. The UI is a hodgepodge of "old" BB OS elements + freshed-up Storm touchscreen-friendly stuff. The clickable screen is a disaster and the web browser was barely a step above Blazer.

While the Storm has a superb featureset (CDMA + GSM global connectivity, 3.5mm jack, 320x480+ resolution, removable battery, decent camera w/ video recording, removable memory card slot + a gig of onboard storage, a few hard butons around the perimeter of the device, good build quality etc etc. In fact, on paper the Storm handily beats the Pre & the iPhone as far as checking off the various critial boxes for hardware specs.

But the device just is uncomfortable to use and hold in hand, the OS is atrociously unintuitive and unreliable, and the onscreen keyboard is terrible. And hardware aside, its media support is worse than a FrankenGarnet Centro or Treo with a copy of PTunes Deluxe and CorePLayer. The only future BB device I might consider would be the Tour/Niagara/Curve 8900, but even that is pretty ho-hum at this point.

And the latest word from the VZW Storm camp is that the latest OS has failed testing, so I wouldn't be surprised to see them putting this dog out of its misery ASAP:
http://www.boygeniusreport.com/2009/05/11/blackberry-storm-os-141-fails-verizon-wireless-testing/

Thanks for warning me off the Storm. I only used it in hand a few minutes, and the keyboard typing was awkward at that time, but I was assured by the owner that "you get used to typing on it, and it gets better". I didn't spend much time inside the OS itself, other than to go into the Calendar app and add an entry. That seemed to be intuitive enough (at least, having come from the Palm world, it did...).

It's looking more and more like the Pre will be my next phone. I just hope Palm does well enough with it that they stick around for support, etc. :)

Did you see THIS purportedly from Microsoft!?

== "...Microsoft has a new twitter account in support of its
== Office 2010 product launch....Two tweets (of five) from this
== account have caught our attention. The first says,
==
== June 2009 will be an important month for Zune lovers.
==
== Then as a followup to the barrage of questions received,
== @officethemovie adds,
==
== New product launch, that's all I'm allowed to say. Hold
== off from buying an iPhone/Pre.

RE: Did you see THIS purportedly from Microsoft!?

It turned out to be a hoax:

RE: Did you see THIS purportedly from Microsoft!?

The tweeter turned out to be a hoax. Very strangely, Microsoft did NOT deny the tweet itself. And, as not that later noted by Engadget: