Updated: Has the lack of Windows Live Messenger integration in Palm's webOS Messaging system got you bummed? Do you stare forlornly at an empty Buddies screen, lonely and sad? Then cheer up, misery guts! Australian WebOS Internals developer Greg Roll has something that'll make you smile: a beta plugin for webOS messaging that adds Windows Live support.

It's definitely not perfect: there are bugs aplenty in regards to Synergy contact linking (that we'll detail after the break). But if you're just wanting to chat with your friends on Windows Live, you're covered. The mod works by altering Palm's custom wrapper to libpurple (the open-source IM library upon which webOS Messaging is based) to support Windows Live, and then updating the database of account plugins. And yes, this also means that other libpurple-compatible IM services - including IRC, Facebook chat and Skype IM amongst others - could potentially be easily added in the future. (Update: Greg has now successfully upgraded the webOS libpurple to version 2.6.2 and has Yahoo! IM up and running as well.)

More details - and pretty pictures - can be found after the break... 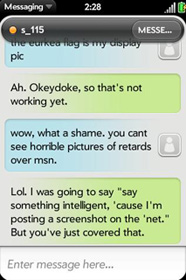 As noted in the introduction, this mod is not yet perfected. I found the following bugs while I was testing, most relating to Synergy. (These aren't complaints, mind you, just warnings to anyone else who wants to test this out once Greg publically releases the mod.)

So in case I haven't driven the point home: don't link your new Windows Live contacts with your official, Palm-supported AIM, Google and Facebook contacts. This means, of course, that you won't be able to totally enjoy the benefits of webOS's "mega-messaging" that links SMS and IM conversations. But it's certainly better than a poke in the eye. 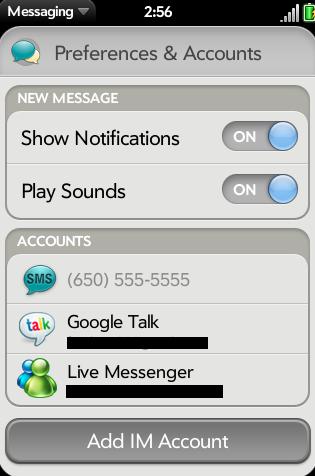 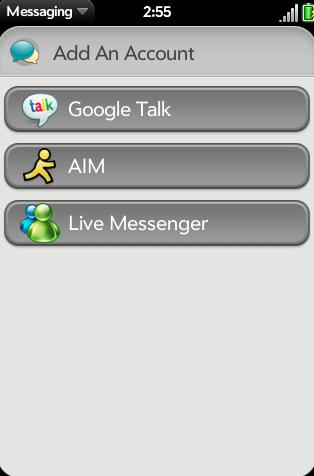 Palm Are Walking The Walk On Open-Source

There's an interesting story behind the development of this mod, as well. Originally, Greg's progress was stymied as Palm had not distributed some necessary libpurple header files (as they're obligated to under the terms of the LGPL). All it took was a few emails, though, and Palm willingly parted with the source code. Apparently it wasn't quite as simple as that: destinal from WebOS Internals has been in talks with Palm for quite awhile regarding their adherence to the LGPL. (We'll be covering that story later on this week.)

Still, it's a big tick for Palm, because the truth is that these kinds of open-source license violations usually go unprosecuted and they likely could have gotten away with not releasing the source at all.

It also bodes well for other mods that may need access to such information, such as the gstreamer plugin mods (for additional multimedia support) that we've previously covered.

When can I try it?

Very soon, hopefully. Greg hopes to release the mod publically within the next few days, after beta testing concludes on the Pre and the webOS emulator. He's also working on updating the webOS version of libpurple to 2.6.2, as Palm are using version 2.5.1 which doesn't support many of the publically available plugins. Greg has now upgraded libpurple to 2.6.2 and has Yahoo IM successfully up-and-running. Next is Facebook & ICQ and IRC not long after those.
Related Articles...
More articles about WebOS
Windows Live Plugin for webOS Messaging In Development http://www.palminfocenter.com/news/9922/windows-live-plugin-for-webos-messaging-in-development/

Having MSN and Yahoo IM is terrific! Thank you.

Yep, I'll second that. Kudos to Palm for releasing the necessary code, too, even if it did take some prodding.

IRC will be awesome!

Will this be a stand alone app? I don't know if I wanna have all those IRC people on my contacts list. Also, yahoo integration is supposed to be included in WebOS 1.2 Is it possible that this MSN Live plug in would work better under the new OS update?
Great Job! I can't wait to try this!

It's not going to be standalone, it's integrated with the webOS Messaging client. Greg's deciding how to implement IRC now. I suggested he let people add specific channels as contacts (rather than the individuals within them) but we'll see which way he goes.

As for how 1.2 might affect things... no bloody idea at this point. Ask again in a week or two :)

Eh, I don't know. I'm in general a big fan of AIM/ Yahoo/ everything else contacts showing up in Synergy/ Contacts, but in my opinion IRC needs to be separate. 99% of my other contacts are people I actually know and would maybe therefore call or text, or otherwise synergize with. But IRC people are generally random strangers that I don't know, wouldn't call, etc.

I don't know, I think it just makes more sense for that specifically to be its own app, with everything else built in.

^^ I agree. I might have been wrong earlier too - I think he said somewhere else it was going to be stand-alone after all. I'll need to ping him again for further news... apparently 1.2 has broken the plugin so public release might have been pushed a bit further back too.

>>>Then cheer up, misery guts!

What the hell pill are you on?

Not sure. Ryan send me a little bottle every week. Says they're for my own good...

viagra? just stay away from your sister.

All the viagra on the Earth couldn't drive me to that - no matter what Bosco says about her...

should have been standard

Why wasn't this functionality part of the phone out of the box?

RE: should have been standard

On a phone like the Pre, you're buying with the assumption that the software is in continuous development. "Out of the box" is less important than the faith that the company selling the thing will add features and refine the software.

An early testing version was released.

I couldn't get it to work in the emulator, but I haven't tried it on my device because I finally finished getting all my hacks and tweaks set up after webOS Doctoring to the official 1.2.

I guess it only works though if you went directly to 1.2 for now, since Palm changed the database format a little.

I'm not going to risk running something in an early state on my Pre though.

Sounds prudent.... actually what I really wonder is what it's going to do to battery life when you're signed into so many IM services at once. Might be killer. the price we all pay for connectivity, eh.

ok so how do you get the windows live into a palm pre webos phone? Cuz I have a palm phone and the IM I like to use alot is the windowns live messnger and well I'm trying to get it but I don't know how... Can you please tell how to get it?

This App is nice but not usable!

What should i do with a messenger who only works if i write messenges and goes everytime offline if i just waiting for new messenges...