"The Palm Tungsten T handheld is business and communications power personified in a smart, compact device," said Todd Bradley, president and chief executive officer of Palm Solutions. "It's about the data, not the desktop. We don't stuff unnecessary PC capabilities into a smaller box; we adapt technology to what matters most to people. With the Palm Tungsten T handheld, professionals can be productive wherever they are."

The navigation and application buttons reside on the new "slider," which glides open when users need to input data using Palm's Graffiti(R) alphabet. For simply viewing and navigating information, which makes up approximately 90 percent of most handheld users' activities, the slider can remain closed, leaving the device in its most compact state most of the time.

The new one-handed 5-way navigator activates up, down, left and right, and select. With the navigator, users can easily launch applications and view information. Classic Palm PIM (Personal Information Management) applications -- Date Book, Address Book, Note Pad and To Do List -- have been updated to take advantage of the 5-way navigation with functionality such as Quick Look Up, which lets users more efficiently find names and phone numbers. 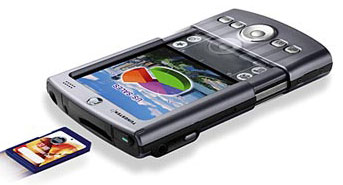 Built for Expansion
Users can customize and extend the capabilities of the Palm Tungsten T handheld with Palm's dual-expansion technology, which includes the Palm Expansion Slot for SD Cards, SDIO and MultiMediaCard media (postage-stamp-sized cards that allow users to access important information without sacrificing valuable memory space), and the Palm Universal Connector for hardware add-ons. Palm's dual-expansion technology enables users to back up their handhelds on the go; add new software, business applications, or memory; and attach peripherals, such as a keyboard, a GPS receiver, or a Microsoft PowerPoint presenter.

New Keyboard
In a separate release today, Palm announced the Palm Ultra-Thin Keyboard, a full-size, collapsible touch-typeable keyboard. The sleek keyboard remains rigid when in use and then collapses smoothly into a compact stainless steel package.

Memory and Battery Life
The Palm Tungsten T handheld is a 16MB device with 14MB of actual storage capacity. Users also have the ability to store additional applications and documents on SD Cards via the Palm Expansion Slot. With an internal, rechargeable lithium ion battery, the Palm Tungsten T handheld lasts up to one week with basic PIM usage at default brightness before recharging.

Palm research shows that Palm Tungsten T handheld capabilities are precisely the capabilities that savvy, discerning customers want -- full functionality for popular business file formats such as Microsoft Excel, PowerPoint and Word, expandability for the latest applications, and wireless connectivity. Palm Tungsten T handheld customers are strong advocates of new, well-crafted technology. They are entrepreneurs, telecommuters and executives on the move and dependent on mobile devices to excel at work. An estimated 37 million people fit this description, and are expected to be the earliest converts to the Palm Tungsten T handheld's precision and power. (Source: March 2002 Maritz: Thompson Lightstone US only segmentation study)

Pricing and Availability
The Palm Tungsten T handheld is $499 (estimated U.S. street price). All products are available immediately worldwide and online at The Palm Store

I like the mp3 capability, better screen, and bluetooth....

Take1 @ 10/28/2002 1:35:33 AM #
Wonder how this thing sounds? Doesn't sound like Palm specifically designed the thing to play music, and that makes me wonder what the bass response and volume of the Tungsten is.

MP3 playback would be a nice selling point and would make their unit on par with the T series.

Headphones would be mandatory. But the last thing I need is music files on a PDA.

Now, toss in that Sony TV chip and you might have something. I'd even settle for FM radio. AM, only if the S/N were *very* good. (There's a new chip for that too, but it may not be small enough for PDAs yet.

An armed society is a polite society.

Infosync: "....we really like the Tungsten T. Users with Bluetooth mobile phones should definitely consider the Tungsten T as well as users who are primarily concerned with size and rapid access to standard information." (5 out of 6)
http://www.infosync.no/system/print/index.php?id=2495

asiayeah @ 10/28/2002 7:16:06 AM #
The BrightBand's review sounds like a Palm sales. The review has so many marketing terms. The review from infosync.no looks more objective.

asiayeah @ 10/28/2002 7:21:28 AM #
On deeper look, the Brighthand review only sounds marketing in the first section (covering the Form factor), while still being objective in the rest of the article.

Tuckermaclain @ 10/28/2002 8:22:53 AM #
I've already ordered it. There had better not be any crap going on like when I pre-ordered my 505. Palm has a chance to make a fresh start with its first big release since the 505 (still not as groundbreaking). The stock #s for the travel chargers and cables are the same as those for the 515!! Palm accidently forgot to make us buy all new accessories!! I can't wait for my Tungston!!

So, if someone likes a product, they can't write a credible review?

On the home page, wordwrap works fine, but once you click through the article, wordwrap doesn't work anymore. I'm not using Internet Explorer which seems to be working right (big surprise there), but Mozilla/Netscape does not.

I know it's a minor issue, but it gets annoying when you have to scroll to read the article AND the comments posted. Besides, not everyone runs Windows (or Mac OS, for that matter). ;)

This is too exciting!!

I can wait to buy one. But I do want to do the Up Close and Personal thing ASAP.

When I asked the kid about it he said they did not have them. I got lucky and the manager was standing near by and heard me ask and said they just came in about an hour ago.

Zippy @ 10/28/2002 2:04:53 PM #
No-one in Vancouver has one!!!
One London Drugs said " I've never heard of that, so I must say that we do not have it and probably will not carry it"
Future shop saleswoman frowned and tried to dodge my question, so I left.
Another London Drugs said they have 600 ordered and awaiting delivery..eta unknown
STaples people said "Palm tongue, what is that?"
Office Depot said "we only have what you see on our shelves"

Ba-gug @ 10/28/2002 3:17:54 PM #
Basically that is what I heard from our Best Buy, Office Depot, Circuit City, and Office Max (Peoria Illinois) "Tungstone what?" so I just ordered it directly from Palm Inc. It has a 30 day no questions asked return policy, and free overnight FedEx shipping. I also spoke to a tech at Palm who told me that the new Tungsten T will work with the my m515 keyboard. I sure hope so!!!

I'll wait until the review are out

RE: I'll wait until the review is out

I've I get a solid week off the battery...

I have to sync almost daily, so a week away from the cradle would be OK, if I had too.

And while it won't charge the battery, synching via Bluetooth would be way cool.

I've thought the PalmOS is more power friendly than the PPC. Besides the physical size of the screen is smaller than the iPaq, even though it has more pixels. Also the CPU has a lower Hertz.