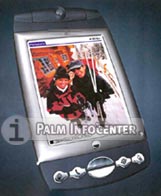 PalmInfocenter Exclusive: An anonymous source has sent us this image, of what appears to be a Palm OS Powered SmartPhone. A quick look at the image shows a possible built in digital camera, microphone, and high-res screen without a silkscreened graffiti area.

It is unclear which licensee has developed this handheld or if it is just a design mockup. You can click on the image for a larger picture.

This image could quite possibly be from a design-study mockup that is used for gauging focus-group reactions or internal "concept PDAs". Companies will often take a number of different design ideas (sometimes just one), build them up into (semi-) functioning hardware (or sometimes even just images) and get people's reactions. This is during the design phase and often they will then mix and match features etc. as they refine the hardware and feature-set.

On the other had, this could be an image of a next generation Palm OS Powered SmartPhone. One possibility that you can't rule out is that this could be a crude mock-up made by some overzealous "fanboy" created in Photoshop or CAD. This could even be some sort of new Palm OS tablet-like model.

Some things that we can tell based on the image is that the device has some form of high resolution screen. There is also no dedicated silkscreened graffiti area. We can't tell exactly but it could be anywhere from 320x480 to 480x640. The model would also likely have a form of virtual graffiti or other alternative input method.

There are icons for the standard DateBook, Address Book, the Web Pro Browser and an unfamiliar icon in the shape of a mobile phone. The small circle on the right looks to be a microphone, which would support voice/phone abilities.

As Always, We will bring you more on this story as it develops.

treo007 @ 11/13/2002 1:42:52 PM #
For me a phone has to look at least somewhat like a phone. This looks like an interesting handheld however. Leave the camera off or make it optional though. I have no need for poor resolution photos.

HandAble @ 11/13/2002 2:11:57 PM #
I used to think the same thing ("no use for low resolution photos") until my wife was in an automobile accident.. she was able to use the built in camera of her NR70V to take pictures before the cars were moved, making it impossible for the guilty party to claim any sort of innocence.

There's nothing about it that tells me that it's a phone.

abosco @ 11/13/2002 4:06:14 PM #
Well, possibly the button on the right that is in the shape of a cell phone? Or the microphone being in the exact position for being talked into while being in your hand?

In my opinion, it's fake. Anonymous source + mixture of things only Palm does + mixture of things Palm said they will never do = phoney. Sure, it could possibly be the next generation smartphone, but don't you remember when Palm said they wanted to incorporate D-Pads on all of their models? They even did it on the Tungsten W. Remember the third button on the i705? It's in the same exact position and the same exact design.

Eh, I don't know, it could really go either way. I would say that it was fake, though, if I had to choose.

No,no,no - read the article. It said 'licensee' - a Palm OS device NOT a 'Palm Inc' device. Having said that - it is possibly a fake, its just that you can't make that assumption based on the 'Palm would never do this' argument.

The Star and Crescent shall not be worn by every man, but only by him who is worthy to wear it...

Getting picky, but Palm Inc is a licensee of the PalmOS, just as Handspring, Kyocera, and Samsung are (sorry - just listed the "known" smartphone licensees). Makes you wonder how many unknown ones there are - Sendo?

Liam @ 11/13/2002 7:27:16 PM #
It's amazing how fast my reply to big raji was taken off. Let me restate! This is not a political forum. Trashing Bush is not appropriate. Deleting my previous post borders on communism.

Since Eds departure this site has become rather weak.

Admin @ 11/14/2002 10:24:15 AM #
Liam: you are welcome to post whatever you want as long as it's on topic and contributes constructively to a thread. Your post borders on McCarthy-ism. That is also Raj's sig, and it is acceptable by me.

I reserve the right to edit/delete any post in my TOS.

That said, it needs work either way IMO :)

Why not; the camera mount looks as though it rotates, possibly more than the NX since it's restricted by the CF blister.

Who needs a SmartPhone

With them combined, it IS a SmartPhone. But, when I want to scale it down (e.g., I go biking, or at night), I can just take the tiny T68i.

No part of that alleged design makes any sense. Looks like some poor college student's submission for a design final. I'd give it an F-.

Please buy Palm stuff, I want my stock to go back up so I can sell it!

And as for the "microphone" (and it isn't at all clear to me that's what it is), why would it be on the right side of the phone? Holding the "phone" to one's right ear would cause the user to stick the left lower corner up in the air. That doesn't make sense. The microphone would be on the left.

I think someone had fun in Photoshop.

TobyG @ 11/14/2002 10:54:29 AM #
One noticable difference between this one and the Oslo is that the Oslo still retained the extended file information from the digital camera used to take the picture. The only extended information on this one is that it was done in Photoshop 7.0. ;)

"Never offend people with style when you can offend them with substance." - Sam Brown

pic of the two guys in skis...

Is it real or is it Photoshop?

Here's my thought: what if the PDA fans / Photoshop gurus among us sumbitted our own *clearly marked* fantasy PDA designs for discussion on PIC. I think it would be great free market research for Palm and would tide us over until the next device comes out. :-)

Ryan, would you consider this newsworthy enough for a front page discussion?

Palm Researcher at the University of Texas at Austin
http://www.edb.utexas.edu/petrosino/pda

1) Television/FM Radio Tuner
Well, we know they are making so why the heck not.
2) (BeOS + Palm OS 5) like OS
Palm OS 6
3) Blue Tooth headset
Watch for some cool new Bluetooth products to hit the market over the next couple of months.
4) Full WideScreen Support (Like Sony Clie)
I love my Sony
5) Virtual Graffiti (Like Sony Clie)
I love my Sony
6) GPS
Give me this with Web Access via BlueTooth, and I'll show you killer App.
7) Get rid of Jogdial and replace with nubby mouse
I hate nubby mouse, but in the case of a handheld they make perfect sense. Also reprogram Virtual Graffiti area to act as finger mouse area.
8) Drop speakers/headphone jacks for Blue tooth wireless.
It will come with or require a bluetooth speaker/headset to output the sound. Can still include Pizo Electric speaker for small bleeps and blunders on Alarms.
9) CF Card (For Microdrive)
I think the Microdrive is the perfect drive for handhelds. Why go the way of the iPod when you can do with 1 GB on a matchbox
10) SD Card
Well, I hate Memory Sticks. Get rid of them
11) No Keyboard or other buttons other than nubby mouse and back button.
Needs room for large battery, and all input should be done via virtual graffiti area which programs you are in modify on the fly to put their own custom buttons down there.
12) Indicators
Little LEDs, and flashy things for messages, Alarms, Power, Signal Strength, Etc.
13) Ability to add on Keyboard/Game pad adaptor either = or ||
I want to be able to hook the keyboard/Game Pad up either vertically or horizontally.
14) Vibrator ability like Pager/Cell Phone
When an alarm goes off I want the thing to bounce off my desk. I want bells and wistles. I Want the thing to send on MP3 to my bluetooth headset. I want the alarm to send a message to my cell phone.