A new rendering of the rumored palmOne LifeDrive has been posted along with some additional details. Read on for more details.

Our previous info states the LifeDrive will have built in WiFi and Bluetooth and a 4 Gigabyte internal memory. It will not have a removable battery and is said to be as thick as two Tungsten T5's. It is rumored to be announced around April 18th at a $499 retail price.

A new rendering, shown below, was just posted to PalmAddicts. Along with the picture come a few new details. The specs from PalmAddicts are said to include: "an on / off / hold button, a rotate button, voice recorder, five way navigation with improved fast scrolling, 4GB Non Volatile Memory, built in bluetooth and wifi, 320 by 480 screen with better color saturation, run by a 416 mhz Intel Processor." 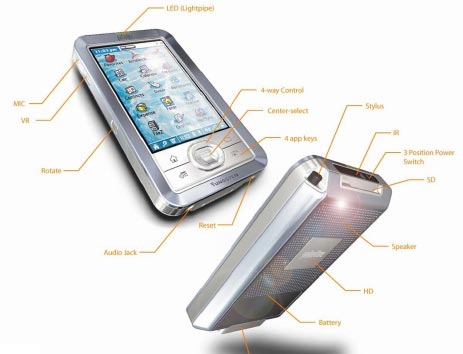 Thanks to Rich and Sammy for the tip.

Why does the applications show FileZ there? This is a freeware app that would be welcomed, but is not likely to be offered by P1. To include it on a marketing shot like this one does not seem plausable. Also, the photoshopped glare spot would have to be a new PalmOne expression.

That does appear to be 'FileZ'. However, examining closely the 'Z' looks fairly clear but the 'F' 'i' 'l' and 'e' are completely unreadable. It could be that this is 'Files', the application that came with the Tungsten|T5, and the way the text blurred/scaled-down just happened to form what appears to be a 'Z'.

The other thing I've noticed is the lack of the "1234" box on the upper right corner. Looks like there's a category, but it's too blurred .

I would say that 'FileZ' is present because this is a 'rendering' - i.e. a fancy artists impression of the 'Life Drive' and not a photograph of a working unit. The artist concerned has therefore produced a simulated screen image - perhaps lifted from a different device running with a similar screen size -such as a T3 or T5. Personally I would place less weight on this image than the deliberately fuzzy 'sneaky' pics of what looked like a running prototype we saw days ago.

This looks to me like an industrial designers 'concept rendering (or pretty 3D drawing) of the type used to propose a design before approval is made for prototypes or mock ups to be made for real. These would be easier to get hold of & copy than images of a finalised product I suspect.

Actually, the icon is different from the standard FileZ on currently available. Yes, this is an artist rendering no doubt. The question is whether it's a rendering by a PalmOne artist and if so, whether it is an actual product?

Strange that an artist would great an entirely new icon too.

Kevin. I'm addicted to Palm too, but if the PalmOne lays an egg this spring like they did in the fall, then we will may be addicted to a ex-Palm.

Not to get too hung up on this - but that is exactly the icon that is on the version of FileZ that is on my device. The text - with big 'Z' - is identical. That is FileZ.

Also, Facer Launcher is there.

With a big stiff hard drive and bursting with RUBE(Goldberg)RAM, it's gonna splatter all over the faces of eager Palm lovers around the world. This monster is set to erupt in two weeks. Bend over and assume the position, Citizen Cane.

Mike Cane: feel free to plagiarize me some more.

It must suck to be you, Mike. I expect you won't have the guts to apologize . Dumba$$.

Google is your friend.

As if I even remember your tawdry posts. But, Christ, this must mean I've been infected by you.

Apologize? Hahahahaha. The estrogen must be eating at your brain -- well, that or the herpes.

Previously I argued that the application in the screen shot above might not be FileZ but a scaling aberration and might actually be Files. However, upon looking at the larger images on Mobile-review.com, I now concede, it is most clearly FileZ.

that thing is GINORMOUS!

seriously.... A pda was meant to be mobile. what ever happened to thin and light and small formfactor?!

WAY TOO BIG! That is a brick if there ever was one. Nice looking though. It seems that more and more this IS the device that will be released soon. We'll see....

With any PDA design, there are trade offs. The designers have to balance aesthetics, usability, battery life, features, performance, resolution, etc. With this device's features (full screen, Wifi and Hard Drive) and expected usage (Wifi, and Multi-Media player) this device is going to need a large capacity battery or else it will have a very short battery life; therefore it has a large battery and therefore it has to be thick.

I do agree this device is going to be a thick one, but I think I can live with it.

Question: How does its size compare to say one of the high-end Sony devices, like the UX50 or NZ-90?

UX50 or NZ90. That's like saying how does a Ford compare to the size of Chevys like the Cavalier or Suburban. The UX is decent, but the NZ90 is a boat anchor in size.

Would be nice to see the "alleged" LD alongside other devices tho. And I do mean alleged.

If this alleged unit has an alleged mini-hard disk, then that is contributing to the thickness. Look at your any of the MP3 players out there with mini-hard disks (iPod, Zen, etc.) and you have similar thicknesses.

There are trade offs here for this alleged product.

"Look at your any of the MP3 players out there with mini-hard disks (iPod, Zen, etc.) and you have similar thicknesses. There are trade offs here for this alleged product."

Horse hockey.
This would be a multi-gig microdrive, ie CF form factor. Pick just about any current model pocketpc with dual slots, one being CF, and it's still thinner than my Tungsten C, which is still smaller that 2 T5's.

I have decided I must have one, but I will be using a mens size 13 furry pink bunny slipper as a case since it is the only thing large enough to hold it and soft enough to protect the STUPID microdrive that will stop often becuase it DOES NOT HAVE REPLACEABLE BATTERIES which it needs because IT ALSO NEEDS A 624MHZ PROCESSOR.

Ho-hum. Back to my T3 until forced to go PPC.

Well, when you take your older Palm AND your iPod mini out of your pocket, you should have more than enough space to fit one of these things.

Myndwalker - I agree. If ppc units can achieve thinner units with dual slots, removable batteries, wifi, BT, and 624 MHZ of power, then this should be able to do the same. Don't get me wrong, I LOVE the stylish looks of the device, and I hope it incorporates at least MOST of what is being written now, but I still think it'll be too thick for a lot of people. Also, why is it that PPC can have, for all practical purposes, G1, but Palm devices can't? I STILL can't figure that one out.
Oh well...

It's not as big as you think, if that picture is accurate. Look at the size of the stylus and SD slot compared to the width of the device.

This thing is about 2/3 the width of a tungsten E, and maybe a little shorter, and a little thicker. It should be about as pocketable as an iPod.

Or am I just imagining things? But otherwise, that stylus is HUGE.

>>>Also, why is it that PPC can have, for all practical purposes, G1, but Palm devices can't? I STILL can't figure that one out.

Repeating for those who keep missing it:

Microsoft got a license from Xerox to cover their butt. Most likely -- as with their Calligrapher license for PPC Transcriber -- the license is *exclusive* and prohibits Xerox (as well as Calli's company) from offering it for other handheld platforms.

The only way for p1 to offer G1 is for them to crush the Xerox suit to the extreme satisfaction of their attorneys. Meaning, if Xerox has indeed appealed, p1 must win that appeal too. That should satisfy the legalities. Now, as for whether p1 would then even offer G1 after that is another matter entirely.

Mike,
Are you one of those crazy protesters I saw on TV at the G2 Summit? Is the what that G# was all about?

The text items in the image above specify (after zooming the image - question marks are mine):

VR? Virtual Reality of course. Finally a holographic PDA
So did anyone wonder if the SD slot area seemed rather large?
Could this have two SD slots? I am NOT going to whine about it not having a retarded CF slot- I will leave that to others.

Gekko, and then you wonder why people put you on the same low level as VoR? You say you're rich? Only in your delusional head! No one with your lack of self-control could ever accumulate wealth.

This new PalmOne PDA does look Impressive but it will not get me to trade in my T|3. I am still holding out for OS6. If this device had OS6 then it would be awesome and I would upgrade. Right now I still don't see any need to get excited or feel incline to upgrade from my T|3. I have Bluetooth and the PalmOne WiFi card. I also, have plenty of storage space and can always add more by buy an SD card.

That is my thoughts on this new PDA from PalmOne.