Mossberg Chimes in on the Treo 600

Wall Street Journal personal technology journalist Walt Mossberg, has been using the Treo 600 for a few weeks and has posted his review. The Treo 600, was just launched in Europe yesterday and will be available from US carriers by the end of October.

In his review, Mossberg claims that Sprint will begin offering the new model ny mid-October for around $500 ~ $550 USD. Europeans can expect availability next month from Orange. 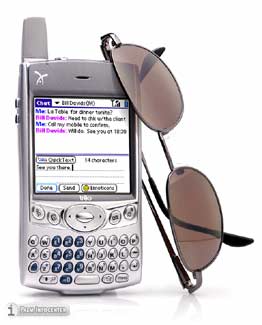 He praises the Treo 600 for it's ease of use, exceptionally bright screen, faster performance and much better battery life. The only drawbacks he found was the low resolution screen and it is a little thicker and heavier than the original Treo.

I've been carrying a Sprint Treo 600 around for a couple of weeks and I love it. It's a great phone, an excellent mobile e-mail terminal and a full-fledged Palm-compatible PDA. I prefer it to any RIM BlackBerry model I have tested, and it blows away any of the PDA/phones based on Microsoft's Pocket PC operating system.

Thanks to Bill Koslosky, M.D. for the tip!

Related Articles...
More articles about Handspring
Mossberg Chimes in on the Treo 600 http://www.palminfocenter.com/news/5951/mossberg-chimes-in-on-the-treo-600/

Yeah, Handspring has a long history of "lousy" products. He's the "only" guy who ever likes their stuff.

a3 @ 9/18/2003 1:29:10 PM #
Wait a sec. I think his previous experience may not be used to reduce the credit that this small gadget has.
I never wanted a PDA-Phone hybrid until I saw the Treo 600!
Anyway I am eager to see a pic showing this phone side by side with any PPC hybrid like the Hitachinstein launched a couple of weeks ago.

If they can cram a 320*320 screen (unlikely), a better camera w/ flash or assist light (somewhat likely) and a better battery (quite likely) into it without adding any more weight, then it'll be _the_ hybrid unit to have (for the time being, of course).

I personally feel this is the sleekest Handspring since the Edge-I always felt the original Treo design looked really clunky and fragile. Of course, all major criticisms are reserved until I actually get to play with one of these things in a store...

Side by sides would be good, but I was shocked at the Hitachi... the thing is HUGE. They must have cut a deal with Burger King to borrow their slogan "It takes two hands to handle a..."

What is it? A combination PDA/CellPhone/Clipboard?

this was gooood :-) and true, gee hitachi is HUGE
even NZ90 would look like super slim PDA next to this brick
but back to the topic: I'd love treo, I'd even buy it immediately (orange is eventually my operator ;-) BUT hires is a must, I saw the pictures on PDA france, it's horrible, I mean I couldn't go back to low res ..
no way

I suppose you can see that both have the same density. That is what I think happens with the Treo. It is 160x160 but Hi res.

hkklife @ 9/18/2003 5:48:59 PM #
Right, but it's the backwards compatability I'm worried about with games and image viewers and stuff designed to be OS5-native or enhanced. So far, every OS5 unit has either had Sony's VG or Palm's 320 320 high res. We already have the T|W throwing a curveball with high-res but under OS4, so now what the flipside of that--low-res under OS5?

It's not that I find anything inherently _wrong_ with an OS5 device utilizing a low-res screen but it's just that for the past year + developers and consumers alike have had "OS5=high res or better" pounded into their collective skulls.

For Palm OS devices, 160x160 does not mean hi-res -- even on tinier screens such as the Fossil watch.

bcombee @ 9/19/2003 5:36:48 AM #
Actually, for the last year, developers that pay attention to PalmSource have had "check for the feature" pounded into their head. They aren't writing code that says "if OS >= 5, hi-res!", they're writing code that say "if hi-res available, hi-res!". The Treo 600's API clearly indicates that it has a standard density screen, so correctly written code should "just work".

Do you anticipate any problems with the vast majority of games released/updated for OS5 in the past year or so with the Treo 600?

The apps which had low-density support that I tried all worked correctly, using low-density. The Palm OS APIs are designed to make it easy to use the right mode.

Good luck with your search...I'm on the prowl too!

pdantic @ 9/18/2003 1:36:37 PM #
Hmmmm...Mossberg's got a point on the Pocket PC Phones, but he obviously hasn't tried any of the Windows Mobile Smartphones that will be hitting the market this fall... I've been using a Smartphone (HTC Tanager) for three months now and love it despite the fact that it has no keyboard. If some manufacturer has a Smartphone in the works with an integrated keyboard, Palm/Handspring could have some real competition.

mikecane @ 9/18/2003 4:35:22 PM #
I cannot wait for the eventual lawsuit against Microsoft and the carrier(s) offering that "Smartphone" for a customer's inability to access 911 in an emergency because the phone took two minutes to boot from being switched off. (And for those of you who don't know, there *are* places where you are *required* to turn off your cellphone. Once off, it's also easy to forget to turn it back on.) Carriers should reject that thing for that legal liability issue alone.

bcombee @ 9/19/2003 5:39:21 AM #
The Sprint Treo 600 I've used came with a nice fabric and elastic pouch that holds the phone and covers the screen while allowing access to the headset jack on the bottom.

"Life is Too Short"

rluxemburg @ 9/20/2003 1:28:40 PM #
1) No screen protection. One of the best things about the prior Treo design was the built-in screen and keyboard protection that a flip unit provides. As with many women, my phone spends a lot of time in a purse. With the new form factor, investing in a case is now mandatory. I like not needing a case for my Treo 180.

2) The price. There's no way in hell I can justify speding $500++ on a PDA/phone. And for that price, a lack of high-resolution screen is a deal killer.

MS Smartphone has it. Does Treo 600 have it?

Mossberg doesn't mention anything on the subject.

I've had to sit through 30-minute conference calls with my headset attached to my Smartphone. During these calls, I can:
- send an SMS and get a reply to a question raised on the call
- check my calendar for possible dates discussed on the call
- etc.

KRamsauer @ 9/20/2003 2:52:01 PM #
Yes. You can do all you mentioned. Note that because of Sprint's limitations on SMS, you cannot send while on the phone, but with the GSM module, this isn't a problem. Indeed on my Treo 180 I was able to carry on an AOL IM session while on the phone. Nifty!

Have you seen how the 600 is optimized for ease of use?
This emphasizes the core difference between MS, and Palm especially Hawkins. Sure there are things that the p800 has that the 600 doesnt. But it has made the stuff most people do 99 percent of the time WAY quicker.

That is not only compared to the smartphone or ppcs. Its efficiency is revolutionary even compared to any previous palm os device.

PPC users like the pda "on" lots.
Palm users tend to want to get it done and back in the pocket as quickly as possible.
Their relative strengths follow those patterns.
For the fans of the Palm way the treo is a leap forward.