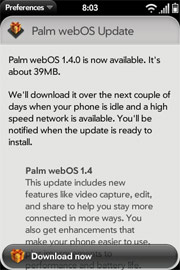 Palm has release the long awaited webOS v1.4 update early Saturday morning. Users on the Sprint network in the US and on the O2 UK, O2 DE, O2 Ireland, and Movistar networks in Europe can now find the OTA update via the Updates app. Palm says on its blog that other networks (namely Bell, Telcel and SFR) will see this "soon."

Update: Verizon users are reporting that the update is now available for the Pre & Pixi Pluses.

i got it early today, and so far, i think this the best update yet! forget about the video recording app, the fact that my phone is much faster, CUSTOM TEXT RINGTONE, though, itunes isnt working still. :( im still playing with it. im very happy with the update, i wish this could have been ver 1.0. plus an itunes fix...

Sweet, I'm sure Palm appreciates your joy and patience.

>>>my phone is much faster,

And what exactly does that mean?

Well, for me so far it means that web pages are loading faster and that email is updating more quickly. The phone is working smoothly and seems more responsive. Am sure will find more to praise as I use other functions. Very pleased.

I haven't fondled it since whatever version the Pixi had. Tx for reply.

Let us know how the battery drains. Some days, I can leave the bluetooth on, leave the Palm Pre in my pocket without using it at all, and drain the battery out in about 5 hours.

That apparently has to do with marginal signal from Sprint in certain area. That seems to be true even if you stay wifi connected.

Any one experiencing the same problem?

Can you turn bluetooth off so its only used when needed?

>>>Can you turn bluetooth off so its only used when needed?

Can you STFU because you are NOT needed? We're all sick of reading your unmedicated hypergraphic schizophrenia here. Get on the mothership already and blast off.

:-(lol) thanks for your thought too.

Mike!
WTF? The first time that I can remember where he actually commented on topic and you jump all over him?

If Palm survives this, I hope they clean house and get back to their roots.
If you've already switched to iPhone consider writing apps, the sdk is super powerful and most of the press about the long delays publishing your app is BS. My last upgrade took 2 hours from 'submission' to 'ready for sale'!
http://itunes.apple.com/us/app/h1-longitude-sea-clock/id349415248?mt=8

Thanks! The museum has been keeping it under wraps for a long long time, not even allowing photographs so I feel privileged to finally make it available to the public as a functioning model. Sinclair Harding makes a reproduction of H1 and they sold 2 last year @ ~1/4 million $ ea.!
Tech Center Labs

It is a great bit of history that more can enjoy thanks to your work.

tech center labs: hey, why not do a Garnet PIM app for Android?

I was working on it but decided to become a horologist and thought you would like this better...
http://itunes.apple.com/us/app/flamingo-redneck-pendulum/id306602572?mt=8

"tech center labs: hey, why not do a Garnet PIM app for Android?"

2a. Also think developers will have a hard time actually making any money on Android apps. At least on the iPhone it needs to be jail broke to run pirated apps.
Tech Center Labs

i'll strongly consider it if it ever gets to Sprint.

While your waiting you could pick up a cheap iPod touch on ebay and start playing with some of the PIM apps. Besides, I can't continue on your Buggy Whip app until you buy your flamingo app.

Sprint may be pushing harder on the Pre, I saw a commercial yesterday that I don't think I've seen before. I guess it wasn't that memorable though, or my memory is really getting bad.
Tech Center Labs

i'm a minimalist and an efficiency expert. i don't like collecting junk and accumulating unnecessary "things" and "stuff". i find a clutter-free environment very calming.

That's cool. I, on the other hand, like stuff.
http://www.youtube.com/watch?v=MvgN5gCuLac
Tech Center Labs

Gary have you played with a "live" WebOS device yet? Thoughts/impressions? I have made the move to Android (at least for the time being). While I find it a terribly overrated, extremely immature platform that is chock full of holes, at least it has much more compelling hardware offerings than Palm's huge lineup of two devices.

I haven't Kris, I was so turned off by the look of the thing, the complete abandonment of their OS and the lack of a PDA version (I still don't use a cell phone) that I wanted nothing to do with it.
If they survive and if they produce a wifi only version of pixi and if they change its name I might try one.

If I had the extra money I would pick up a Droid but now I might just get the iPad next. I don't think it will be much of a seller for apple but I'll need it to test app compatibility.
Tech Center Labs

Yup, same here on both counts. While my Treo 755p was still holding up relatively well last November, my dumbphone was dying a terrible death. When I noticed a suspicious lack of decent higher-end flipphones (not candybar "multimedia phones") to replace my RAZR2, I decided to give the Droid a whirl.

In a nutshell, its phone performance is awful (worst Motorola device ever), its battery life sucks almost as bad as the Pre, the keyboard blows, Google Maps Navigation is a STUNNING killer app, Android's PIM functions are horrible, the video capture of its camera is phenomenal (DVD quality), the screen is awesome, the build quality is very, very good (despite an uncomfortable formfactor) and its generally pretty responsive. I also like the amount of community support & the inclusion of a microSD slow (plus 16gb freebie in the box).

My Treo remains activated and I still use it occasionally for PIC purposes, legacy apps and PIM reference though the Droid is my daily "phone". Nothing beats Garnet for PIM and fast, efficient, intuitive one-handed navigation & data input.

A Garnet PIM app for android would offer many hardware options but an app for the iPhone might be as good. My Centro as a phone/PDA works for me with data backed up to Outlook running on the desktop but the EOL for this is on the horizon.

IMO you're asking for problems when you try to graft an ancient PIM emulator onto a modern OS. just cut the cord, move on, and don't look back when the time comes.

Are you saying an iPhone PIM works OK or you would like a PIM like Garnet on the iPhone? In scrolling thru the iTunes store looking for apps, a pain IMO, I haven't found a PIM app that looks good. If you have, let me know.

I am interested in a new app that works like Garnet PIM, not an emulator as I agree an emulator will have it's own problems. A fresh start on the iPhone O/S with the features of Garnet PIM would be great.

When the Centro dies or is left in a taxi (the usual upgrade path for me), I'll move on of course but finding a PIM as great and simple as Garnet would be nice.

what else do you want?

P.S. If you want to get into Android development this might be a better choice (contract-free, fullsize SDHC compatible & SDK included) :
http://www.zii.com/Developer/Landing.aspx

It looks tempting Kris but at this point it still has to go through a lot of growing pains while the iPod Touch is mature, has tons of user, good app distribution and gets better with each release.
Tech Center Labs

For anything not covered by the built-in iPhone PIMs, Bento is a nice app, especially if you're on a Mac...

no thanks. i don't like using proprietary apps and formats when i can just as easily (and for free) create, customize, store, share, and manipulate my own Excel or Word documents - and use them on any PC or Device regardless of OS.

opps, I was talking to rpa ;-)
Tech Center Labs

>>>Mike!
>>>WTF? The first time that I can remember where he actually commented on topic and you jump all over him?

Yes, because prior to then I had to wade through a billion of his dribblings elsewhere here. Final straw, just seeing his goddammed handle.

Mike your losing it. Just learn to ignore that which does not concern you. Your input is welcome just with less emotion and more logic.

gekko, gmayhak: thx for the links....I'll check them out. The Garnet PIM app is hard to beat for simplicity.

>>>Your input is welcome just with less emotion and more logic.

WTF are *you* doing lecturing ANYBODY about *logic*, you freaking schizophrenic ponce?!

hmmmmnnnn. i had to look that one up. good one. i learnt something.

Mike stop crying and learn to get along. I did not mean to hurt your feelings please understand i have as much right to freedom of speech as you do. You choose to attack my mind that is your choice. I prefer to think rather than insult people.