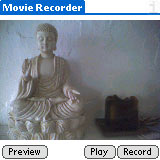 MovieRec, or "Movie Recorder", is a basic movie recording application for the Treo 600 smartphone.  Currently, the application is in the alpha stage and is more or less a proof of concept as the Treo 600 does not ship with the ability to capture video.

The application can record a 5 second 160x120 uncompressed video clip to the Treo's internal memory. It does not capture sound and is limited to only recording one video to internal memory. You can only play back the video onboard the device at the moment. The software shows promise as it can capture video at a very high frame-rates, but is limited to 10fps due to memory constraints in the early version.

The developer is working on enhancing the application to allow saving of the movie clips, exporting clips and compression. The app requires over 3MB of free memory and has a number of bugs you should be aware of before testing it out. More details and a download can be found here.

a3 @ 3/10/2004 12:38:06 PM #
There you go, just when I thought that the Treo was good enough something to make it even better! I wonder if there is any other smartphone with video capabilities... yes I know it is very soon to say video capabilities but at least it is a start...

Why did people buy the Flowbee?? Because they could!

Why would people want a crappy video recorder?? Because they can! :)

I think there are a few Samsung phones that do video, as well. Many current phones have video or at least limited/short video capabilities.

craigf @ 3/10/2004 3:02:39 PM #
"Why would anyone want a crappy video recorder?" Well, given that Panasonic has been selling the heck out of its straight-to-SD mini-camcorders, I think there's a large number of folks who want this. Besides, if I can add this functionality without increasing the bulk of what I already carry, why not?

That is why other material and reviews state that the Treo 600 has not been capable of video recording.

Why would anyone need a crapy moving recorder?
"

What motivates people to write this kind of garbage?
Makes me think :
Why would anyone need a crappy troll in a forum?

beardsm87 @ 3/11/2004 9:23:56 AM #
Does this mean a future version of the software will be able to use the sound capabilities and save streaming video to a memory card?
unlimited length movies with sound on a handheld? wow.
would this mean that people would be able to mail each other videos?

I seriously doubt that until PalmOne finally releases the voice recording API to do this...

More info can be found...

Btw, the lost camera driver error was pretty freaky when I first experienced it, but luckily only need to do a soft reset, NOT A HARD reset, to fix it! :) :p

Maybe possible with the zire71?

Could it be possible?

RE: Maybe possible with the zire71?

But the Treo 600 is hands down the best unit made to date.