The Garnet VM is a virtual machine that essentially acts as an emulator with the ability to run native Palm OS applications on the Nokia N770, N800 and N810 devices, but not the new Nokia N900 phone. It supports over 30,000 native software applications written for the Palm OS, including some of the most popular mobile applications on the market, such as Google Maps, Bejeweled, SnapperMail and Sudoku. 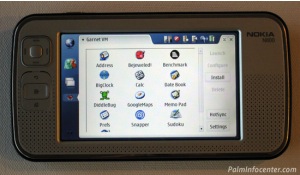 With Classic on my Palm Pre currently b0rked thanks to incompatibilities with the webOS 1.3.1 update and with the Garnet VM supporting full resolution and network hotsync, suddenly this product seems less like a desperate attempt by ACCESS to remain relevant in a market that has passed them by and more like a viable alternative for longtime PalmOS users looking for an upgrade which doesn't force them to lead decades of data behind.
Palm Apologist
Shouting down the PIC Faithful Since 2009
Screw convergence
Palm III->Visor Deluxe->Visor Platinum->Visor Prism->Tungsten E->Palm LifeDrive->Palm TX->Palm Pre
Visor Pro+VisorPhone->Treo 180g->Treo 270->Treo 600->Treo 680->T-Mobile G1->Palm Pre
http://mind-grapes.blogspot.com/

Excuse me here, but is this not emulation of a dead OS on a platform whose owner is basically underway abandoning? Still, I guess it's good that Palm OS lives on anywhere.
Pat Horne

LiveFaith wrote:
Excuse me here, but is this not emulation of a dead OS on a platform whose owner is basically underway abandoning? Still, I guess it's good that Palm OS lives on anywhere.

As long as you have a functional Palm OS device (as we all know, for any device made by Palm Inc, that's never a guaranteed thing!) and as long as you have your apps backed up onto physical media and have the reg. codes written down or saved someplace safe, Palm OS will continue to "live".

Garnet VM running on Android would suit me fine

That would be a very interesting thing to see.

Google doesn't license. They buy. Or as in the case of books, just steal.