One of the items of initial concerns by many users and members of the media following Palm's Pre CES announcement was the device's battery capacity. TreoCentral's Dieter Bohn has now confirmed that the Pre's battery is going to be 1150mAh and exactly identical in dimensions to the existing stock Centro and Treo 800w batteries.

While this is certain to come as very good news to current Centro and 800w owners looking to upgrade to the Pre, power users may feel left out in the cold, as Palm's previous flagship device, the Windows Mobile 6.1-based Treo Pro, ships with a mighty 1500mAh battery standard. Fortunately, one advantage of the Pre's shared battery architecture between the older 800w and Centro means that replacement batteries and widely and affordably available on the market, including Seidio's extended-capacity OEM-size 1350mAh Centro/800wbattery, covered here. 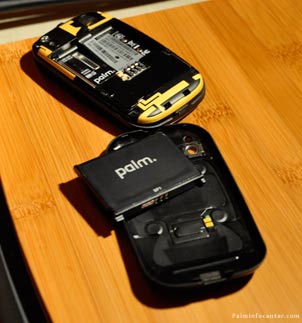 With this aspect now confirmed, one of the greatest remaining mysterious about the device's hardware specs has been addressed. While Palm kept touting the removable battery design of the Pre during last week's CES events, they failed to give any specific mention of the battery's exact capacity. At the Palm VIP press event following the keynote event, I was told by a Palm rep that the battery was 1200mAh in, and "basically similar to the Centro design" as I noted here. The rep stated that the batteries were compatible between the 800w, Centro and Pre but Palm did not "recommend" that Centro batteries be used with the Pre.

Let's hope that the combination of the TI OMAP 3430 processor and the Linux-based WebOS will make for a fairly efficient device, as the combination of more frequent data transmissions to the "cloud", an EVDO Rev. A radio (CDMA being notoriously more power hungry than GSM), wi-fi, and a larger, higher resolution screen than any previous Palm smartphone could make for a potentially energysapping device.

But if the induction charger can charge a bare battery I could just buy a second battery and leave it laying on the charger.

Who said the induction charger charges the battery directly!!?

No one here has ever said that.

The Touchstone has a small footprint and a severely sloping front. I highly doubt a battery would stay stable on its surface. And even so, I would think it needs the special battery cover for the Pre to make contact with the points on the back panel of the Pre contacts in order to charge the battery.

That is, the Touchstone charges the battery by way of using the Pre's special battery cover + the body of the Pre itself as a conduit.

So we can probably use the tmobile android g1 as a good proxy for the pre.

android is based on linux and the tmobile g1 has a 1150 mah battery.

Lots of people have been complaining about the battery life of the g1.

Its hard to quantify how long the g1 battery lasts because everybody's usage is different, but I can typically get about a day's worth of usage before I need to recharge the battery. I use the g1 more as a mini computer than a phone so most of my usage is using the browser and 3g/wifi data access.

The g1 hardware has similar specs to the pre.

Biggest unknown is how the OMAP CPU compares to the qualcomm CPU in terms of power usage.

Off the top of my head, I know that the G1 has a microSDHC slot but no 3.5mm headphone jack.

How does it compare battery capacity-wise and does it have any onboard storage in addition to the 192mb for running programs?

I'd figure the Pre has a slight edge at least as far as performance for graphics & video acceleration from the TI OMAP.

But really, what's with the "big 3" (Pre, iPhone 3G, G1) not supporting video recording? I had a Sony Cybershot that did MPEG video recording way back in 2000, fer cryin' out loud! Even if it was a crummy 320x240 resolution limited to 30 seconds or something, it'd be better than *nothing*! It's like all of these next-generation smartphone platforms are trying to see who can rake in the biggest sales while skimping as much as possible on the hardwre.

4GB+ of onboard storage + SDHC slot + 3.5mm jacks + video recording + BT voice dialing + wi-fi + high capacity removable batteries...this should ALL be standard on all of these smartphones. It's 2009, not 2001!

The hope is the Cortex architecture is much more power-efficient than Qualcomm's.

That said, it would probably take really good machine-level aware programming. However, using interpreted languages (HTML),can only increase the cpu load and avoid optimizing for the hardware. At least it lets Palm engineers optimize it more than hack programmers.

Would be that palm devices could be charged at a certain distance.... kind of like bluetooth, i remember reading about it a long time ago that Enrico Fermi or Nicola Tesla (don't remember which) that proved it could be done many years ago (obviously) but that it would have been such a great energy resource that electrical companies didn't let it develop.

Palm has been working on just that thing. I got this spy shot in email:
http://www.wilsonsalmanac.com/images1/tesla14_cr.jpg

Tesla had an idea that aircraft could be powered in flight by receiving energy from a ground based transmitter. I think this is what you're referring to? He was a contemporary of Edison so I doubt that it is any more than a dream.

>>>He was a contemporary of Edison so I doubt that it is any more than a dream.

Edison?! Edison was a Let Me Try This guy. Tesla was a &^%$ing GENIUS!

Tesla envisioned the frikkin abominable Kindle before ANYONE ever considered electronic print!
http://ebooktest.blogspot.com/2008/12/quotes-nikola-tesla-in-1926.html

Tesla is the name used to measure magnetic fields....... and this phone/electrical interface works by magnetism..... go figure

If writing a garnet emu is even possible in html (palm pre)? I mean technically speaking is it possible, hard or easy? I don't know much about programming....

According to the StyleTap guys, they require C/C++ access in order to work.

Based on comments from David Beers, I think that's unlikely. If anything, developers are more likely to be exposed to a java API than C/C++.

Ok, bear with me..... don't know much about this. I know symbian is what's used in the majority of phones.... but is it java?

No. Symbian, IIRC, began as Psion's EPOC OS. It went through a very twisty history to where it is now owned solely by Nokia.

Just how WEE is the Pre?!

I was in J&R this morning checking out the tech stuff (no VAIO P in yet to molest, dammit) and made a point to go over to their cellphone area and study all the models.

I was shocked to see how damned *small* the HTC Touch is. Using WinMob, I really expected something the size of a PocketPC! But the damn thing is *tiny*. And so is the screen!

All this makes me wonder if the Pre is the same small size. If so, am I going to be able to *read* that damn screen?! I have an awful feeling I'll need to keep my reading glasses on a strap around my neck at all times in order to use it. That's not something I'd have to do with an iPhone, btw.

And if the Pre *is* as small as the HTC Touch, would I be able to use that keyboard?!

To the people who saw it at CES (Ryan, et al), do you know if it's as wee at the HTC Touch? (No, don't tell me *you* could read the screen, dammit. Wait until I get my Obama Stem Cell Therapy and I'll have young eyes of my own again!)

Fuzzy picture, but it's top right - how tiny!!!
http://www.unwiredview.com/wp-content/uploads/2008/04/htc-touch-diamond-htc-touch-pro-htc-touch-dual-pro.jpg

Didn't someone link to a pic of the Pre next to an iPhone? Repost the link here. TIA.

I thought the same thing... but I've seen pics of the Pre next to an iPhone (can't find the link again but will search), and surprisingly the screen size difference wasn't as large as I was expecting. The Pre screen size didn't really look that much less than the iPhone side-by-side, but every time I look at the Pre I keep thinking the same thing... dang that thing is tiny! Am I going to be able to use it? And... when the heck is the GSM version coming?! :)

Go to 38 seconds at this vid and they begin to group together:

OK, maybe it's just me. Maybe I missed it in other videos. Or maybe this video is somehow skipping on me. But look at this one:

- at 46 seconds in, she says, "I can do email as well" and the email app pops up - WITHOUT her touching the screen or calling up the Launcher. She MUST have hit something on the keyboard to call up email. In fact, it looks to me like she also does a few other steps just from the keyboard!

Am I the last to notice this?

RE: Pre has keyboard shortcuts?

put your bifocals back on. she hit the email icon at the bottom.