Last week images surfaced of an unidentified device that gained a lot of buzz and circulation due to its uncanny Treo like keyboard and unusual form factor. Of course, the rumor mill immediately began churning out various stories that this was to be Palm's first Nova device while others claimed it was a future Palm Windows Mobile handset. The term "Roteo", previously coined by our very own Pat Horne as a whimsical work of Palm fiction, began making the rounds online as the mystery device's very own code name.

Now some light has been shed on the mysterious handset, as Pocketables has revealed that this is a rather chunky unit is in fact a prototype mobile Internet (MID) device from Compal with the amusing moniker of "Tabasco". The site tracked down the original photographer and gleamed a few of the specs and points to additional pictures of the non-working display unit which was in fact showcased during the Computex 2008 show.

In short, the report claims that this Compal device has a 3.2mp camera in the rear with a 2x optical (not digital) zoom lens and a flash, in addition to the front-mounted webcam seen in the images. It's estimated that the device measures somewhere around 6.3 x 3.3 x 1.4 inches, which certainly places it outside of what one would expect for a smartphone. Screen size is reported to be 4.5" to 5" diagonalno word on actual resolution but given the physical size of that LCD, something along the lines of 800x480 would be hopeful, as seen on some recent Windows Mobile devices such as the Sony Ericsson Xperia X1. 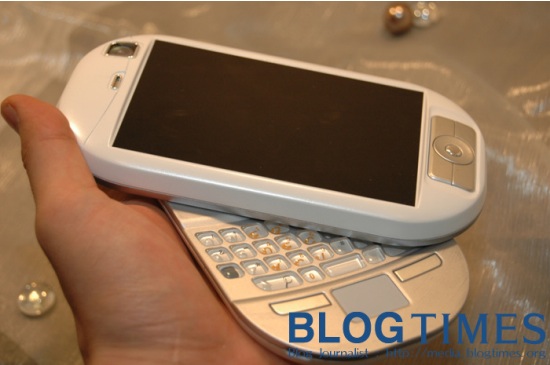 Oddly enough, around this same time period word leaked out via the Asian trade sites that Palm had just signed a rather large ODM order with Compal. That report from August mentions Palm placing a huge 5 million+ device order with Compal for WinMob-based units. It also made specific reference to "several models of smartphones", so it remains reasonable to speculate that this could have been some sort of early prototype or could even become the basis for some future Palm-branded device.

would go nice with FrankenGarnet

In the movie "Iron Man", there is much slicker device of the same configuration. Has anybody seen it? I think that's what the final product will look like.

Yeah that was an LG, far beyond Palm's capabilities of late.

Looks like a concept from some ritzy industrial design firm. The swivel out from the bottom keyboard is a neat idea but the proportions needs work.

This seems like a form factor that's uniformly worse than the alternatives. For that kind of device, a slider seems to be pretty good.

And the retro appearance of the old circular Tungsten navigator and the scrunched up HW buttons of the Zire really scream "avoid!!." Not to mention the color looks like it's straight off the "COBY" assembly line.

There's no way this is anything from Palm. Even THEY aren't this stupid.

With a touchpad, maybe any operating system mouse base can be installed easily (linux, windows, mac, etc...), this can be like a mini mini notepad

What! Over and over we've been ahead of the curve with breaking stories. The boys from SunnyV hire me, I do the leg work, they get ready to release and another bean counter reverses course for another Treo rehash. Now the latest and greatest is called fiction. And worse, it's around Christmas time and the unbelief still goes on!

Don't come groveling at my kneecaps when you wanna cowboy up for a Roteo at your local Best Buy. ;-)