On July 1st, California will be joining Connecticut, Illinois, Nebraska, New Jersey, New York, Oregon, Washington State and Washington D.C, by implementing a hands-free requirement while operating a motor vehicle. The new law prohibits the use and handling of mobile phones while driving. Talking while using hands-free devices, such as Bluetooth headsets, will still be allowed for those over the age of 18.

Law enforcement officers will be able to pull drivers over for using handheld wireless phones. The fines are $20 for the first offense and $50 for subsequent convictions, regardless of age. Drivers are still allowed to make emergency phone calls without using a hands-free device. 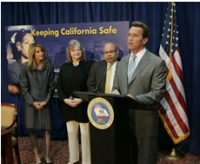 A recent survey shows that 80 percent of mobile phone owners talk on the phone while driving and 40 percent between the ages of 16 and 40 compose and send text messages while driving. There are approximately 115 road fatalities in the U.S each day alone and distracted driving causes 80 percent of those accidents, according to the National Highway Transportation Safety Administration. According to a study released May 12, 2008 from the Public Policy Institute of California, California's hands-free cell phone law could save an estimated 300 lives a year.

Palm Treo and Centro smartphones fully support hands-free use. They are equipped with speaker phones and are compatible with a number of hands-free accessories, including Bluetooth headsets, earpieces and various car kits. You can browse the selection at the PalmInfocenter Accessory store or view the selection at Palm.com.

Of course, now we have text messaging causing accidents so I guess that would be hard without handling...lol!

But re phones, not communicators, don't talk and ya don't get distracted, phone in hand or not.

Two of my friends have had phone-related car accidents, due to fiddling with the damn thing rather than paying attention to the road. One rear-ended somebody whilst reading an sms, and the other drove over a traffic cone near some roadworks while they were trying to answer the phone. I was in the passenger seat. Dragging along the highway it made this horrific grinding noise - the kind of sound you never want to hear a car make. It sounded like it was going to explode. Scared the crap out of us.

So, I don't know about scientific studies, but my own anecdotal experience reckons these kinda laws are a good idea. We've had them in Oz for awhile now and the world hasn't ended.

Maybe it's a portent.

Most of the erratic drivers I have seen or have the misfortune to be passengers with, are one-handed drivers who are too cheap skate to spend a couple of hours of their wages on a quality wireless headset.

Complete idiots the lot. Many who does not see the potential consequences of their actions to others. I laugh any time one gets killed, but mourns the innocent victims killed by these monkeys.

However, from the link given in the thread below (http://www.psych.utah.edu/AppliedCognitionLab/TRB1.pdf):

Prior research has established that the manual manipulation of equipment (e.g., dialing the phone, answering the phone, etc.) has a negative impact on driving (e.g., Brookhuis, et. al., 1991; Briem & Hedman, 1995).

SV, seems to me that you overstated the case beyond what the research actually showed. Yes, their research showed that the "conversation" had a significant negative affect (and possibly "greater" in the sense that the conversation is longer in duration than the "manual manipulation of equipment"), but they did not conclude what you said they concluded: "...not the handling of phones....". The manual handling of phones had already been shown to "have a negative affect on driving" (the quote above). Their research was designed to go beyond the previous studies to conclude that is was also the conversation itself that affected driving. It's not an "either/or" issues. The conclusion I would reach from their research is that it is "both/and". And even the type of conversation (topic and content) has an affect to a greater or lesser degree.

So if they aren't going to place an outright ban on any conversation in vehicles, cutting down on the "manual manipulation of equipment" is at least a start in reducing some of the craziness I have seen. At least it'd be easier to turn the steering wheel!

Interesting stuff though. Maybe given enough time, I'll find out if they compared phone conversations to "live" conversations with passengers. (But not today; I'm late getting to bed.)

What took them so long?

People fret about the "dangers" of radiation from mobile phones when in fact far more harm and death comes from MVAs resulting from inappropriate mobile phone use when driving.
The sad thing is even with a hands-free kit, there still is a risk. So the best thing is don't use your mobile phone at all when driving.

Welcome to the Police State

Enjoy your freedom while you can folks. The police state continues it's persistent march into every facet of our lives. We welcome it and welcome it, but when we realize the error of our ways we will be past the point of no return.

Oh knock it off.

Double knock it off. Handsets have been in cars for over fifty years and thanks to irresponsible consumers, we now have this law.

I'm glad that this doesn't cover CB and others types of radios like the original drafts did. There are a lot of armature an commercial radio operators with handsets that have been using them while driving with little incident for decades before you could buy them in retail stores.

This is mostly aimed at the soccer mom and the high schooler that can't keep their eye on the road as they are more concerned about a grocery list or who is dating who while driving. With it being in California, I'm sure there are going to be court challenges to this for the next year or so.

Police state? I don't think so.

"Oh boo hoo hoo! Waaaaah. Why can't I still act like a self-centered asshole and jeopardize other people's lives on the road by distracting myself with my phone toy! I'm so oppressed! This is a police state! How dare people try to govern my behavior for the good of other people! It should be clear I don't give a *&^% for other people. Only I I I me me me matter!"

"Keeping California Safe" ... what a banner. :-o Sheep will believe anything!

Anyway, maybe the froggie is not 4 real, so I should be saying get your claws out and you tails up. Go ahead and assume the position there Mekk. Rest assured the elected thugs in Sacramento are turning up the eye. One little freedom/degree at a time.

Notice that the article and presumably the law mention "cell phones" and "wireless" phones.
You can still use your landline in the car, while driving!

Here in Spain the penalties for using the cellphone while driving are FAR worse and were enacted already a few years ago. The fine is 300, aproximately $450, to start with. Plus, you lose 3 points off your driving license, which are quite painful to recover.

Oh, and you can use a BT handsfree speakerphone, but BT earphones are also forbidden. I thought that was dumb, and did buy one (they are CHEAP) finding it impossible to get caught at that. However, I found that fumbling around the car trying to get hold of the earphone, then fumbling to plug it in, then fumbling ever more to operate the tiny buttons did not make for safe driving at all. And trying not to lose the tiny little thing and keeping it charged was a chore I loathed.

Still, all the time you see people talking on the cellphone while driving. Often you can tell because their car wobbles left and right quite apparently, seemingly incapable of tracking its lane. As for the conversation being the culprit, not the cellphone, that's boollsheet.

As for new laws clipping ever more rights, that really, really sucks. Especially when for a million laws enacted, only one is abolished. Now, in this case, I think fines are OK, but 300 and 3 points are WAY excessive. The California law is VERY tolerant in this respect, and will surely prevent many accidents.

Then, while it is relatively easy to get away with ignoring the law this side of the ocean, my experience is that in California you cannot cough loud without the LAPD materializing before your eyes, so fines there will probably pile up fast.

Where I live, "hands-free" has been the law for as long as I can remember. It really isn't a problem if you can get used to always having your "stuff" prepared before you start driving. But plenty of people are still holding their phone up to their ear anyway; there's a lack of enforcement of every traffic law, not just this one.

As for the holding-the-phone vs. conversation question, all I know is what I've seen as well. People holding phones up to their ears seem to be driving worse than others. I hate getting stuck behind one, because generally they are driving slower than the rest of the traffic, and they can't seem to keep their car properly oriented in their lane (weaving over the lines). And don't get me started on being stuck behind someone who is trying to make a left turn while holding their phone! They obviously have never learned the art of cranking the wheel one-handed.

So I'm still working on trying to understand why (supposedly) the "conversation" is the problem, when people are having conversations with the passengers in their cars all the time and I haven't heard or seen anything to indicate that is a problem. So why would a hands free conversation on a phone be any different? So is there something significant about there being no one else in the car while you are talking?

> ...So I'm still working on trying to understand why (supposedly)
> the "conversation" is the problem...

Because science has shown it to be:

This is a particularly good one:

== "...In sum, we found that conversing on either a hand-held or hands-free
== cell phone led to significant decrements in simulated driving performance. We
== suggest that the cellular phone use disrupts performance by diverting attention
== to an engaging cognitive context other that the one immediately associated with
== driving. Our data further suggest that legislative initiatives that restrict
== hand-held devices but permit hands-free devices are not likely to reduce
== interference from the phone conversation, because the interference is, in this
== case, due to central attentional processes."

Now if I can only find a phone that stays paired with Bluetooth..

I've basically given up on Palm ever figuring out how to keep a stable bluetooth connection running on their devices, at least on my 755, 700p and 650 it's mysteriously unpaired and/or just not activated while calling far too often than not. I will count this problem against Garnet, but Palm's been sitting on their hands regarding the next Palm OS for how many years now?

Ironically, it was Palm themselves that were pushing for this law's enactment. Since their own phones seem to be poster children for why people CAN'T easily use hands free, I still don't understand what their game was on that. Maybe just another of their many attempts to make their customers leave and go to Blackberries or WinceMob devices or cup + string rather than endure Palm's foolishness.