TreoCentral has uncovered a set of Palm internal training slides that detail a number of upcoming rom updates. The most surprising detail is plans for a soon to be released Windows Mobile 6 Professional OS update for the Verizon Treo 700wx. Incidentally, minor dot updates will also be coming to the Verizon Treo 755p and the Sprint Centro, though no details on these were included in the slides.

The Verizon Treo 700wx Update v1.24 is listed as coming this "Spring and Summer." It will be a free update and only be compatible with the 700wx. It is unclear from the limited details if it will be WM 6.1 or the older WM 6. 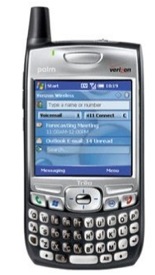 It is somewhat of a surprise that Palm will be releasing an update for a model so near to the end of its lifecycle. It is even more so with a rumored hardware replacement just around the corner. Verizon first picked up the 700wx in February 2007.

The 700wx first debuted on Sprint in September 2006, it was essentially identical to its predecessor the 700w, with a bump in internal memory. The latest rumors on its hardware successor the Treo 800w, show it coming to Sprint first this July.