Palm's European site has thrown up a teaser page announcing a competition for a chance to win five of "the new Palm smartphones". In it, residents of the UK, the Netherlands, Germany and Italy are invited to enter their email address and sign up for further information that will wend its way into their inboxes on September 12th. The page states:

"The new Palm smartphone. The word is, it's great for email, mobile internet, instant messaging, text and - with a full keyboard - saying what you really mean... Sign up now and you'll be the first to know all about the latest cool phone from Palm on 12th September 2007." 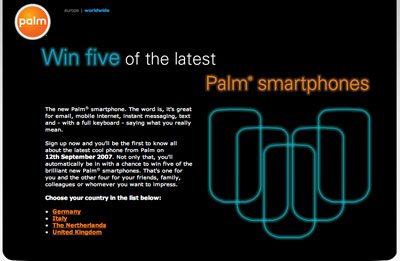 It's likely that this mystery phone could be the new Centro, or a variant thereof. Numerous pictures of a couple of new Palm smartphones have been leaked over the summer. There's no hint of which network it will be appearing on, but if you were to guess Vodafone you probably wouldn't be far off the mark: not only did they partner with Palm on the Treo 750v, but they also just happen to have coverage in all four of the aforementioned nations.

A bigger question mark hangs over the choice of operating system: photos of both Palm OS and Windows Mobile prototypes have been leaked. Since Palm has previously exhibited a preference for Windows devices in Europe - with the 750 receiving the lion's share of their international marketing efforts - it seems likely that this will be the first Windows Mobile variant of the new Centro form factor. We'll find out on September 12th...

first of all I would like to say that I am happy to be be the first one to leave a comment on this. :D

Secondly, I am eagerly waiting for the new Treo series. If it comes in 5 flavors (as the teaser's picture suggests) I would choose the one which combines PalmOS+WiFi.

I am really optimistic about this. I can feel it. WiFi on Palm Treos is just around the corner.... I can smell it...

^^ xpan, I hate to be the crusher of dreams, but I think those five outlines on the teaser picture are just promoting the "win 5 smartphones" aspect of the competition, rather than suggesting that there will be five different varieties...

really hate to burst that bubble... the five phones most likely not five different phones, but probably just one phone... the "centro" or whatever they're going to call it, in five different colors.

If it's the "centro" then having wifi is impossible... the aged Palm garnet OS cannot support both a cellular radio and a wifi radio in one device... ever wonder why Palm never release a treo driver for they sd wifi card?

What is Palm thinking?

Are they really convinced that limiting the competition to just 4 European countries is going to increase their popularity in the remaining countries?

Imaging a US contest which people from 5 states are not allowed to enter. This site would slow to a crawl with the forums filling up with complaints...

Since Palm doesn't seem to be interested in selling whatever new product they have to me and millions of others living in France, Spain, the Nordic countries,... I think it is best that we look elsewhere.

RE: What is Palm thinking?

If it is an unlocked GSM, it will work almost anywhere.

I know Palm tends to hire a lot of youngsters - but c'mon kids... at least run a spell checker if you haven't had a chance to get out of the U.S.A. yet.

Posting an ad like this just confirms that Palm is barely conscious anymore. Perhaps the people in the Netherlands will be so stoned they'll find kinship with a company that can't even spell their country correctly (in an ad with only FOUR countries listed). Doesn't bode well for whatever's coming out on the 12th...

RE: huh? Wha' happened to Spain?

Since this is SUCH a silly error - pretty amazing, as a matter of fact - I took a look at the page source to see how it came into being. Interestingly, PALM removed Spain from the list:

If I were a betting man (I am! I am!) I'd bet someone went in to remove Spain, made some sort of trivial editing mistake, and retyped in the following line carelessly...

So, okay, the damn thing did NOT post correctly - okay here it is again with some key characters replaced with '#' instead:

Whatever the reason - it's not like Palm is releasing so many new devices nowadays (ever), especially in Europe, to let this stuff slide for days.. Allowing such a huge blunder to just sit there is an admission that either (1) nobody at Palm even pays any attention to their "big" announcements and/or (2) Someone without even the wisdom to spell check such an announcement is allowed to edit it. Probably from the same crew that's been beta testing the Treos for years.

Perhaps I'm a mild "grammer nazi" and/or just too old to not pay attention when a multi-million dollar company puts up garbage like this ignoring the impression it gives of their quality control. When I was in the advertising business we threw out and reprinted thousands of dollars worth of printing for errors much less critical than misspelling the name of one of our four market countries on the front page of a brochure. Does the fact it's printed on the web instead of paper mean their audience is that less valuable?

Sorry, but whether it's "true" or not - to me making major flubs like this is indicative of a company culture that isn't paying attention. Whether it's not putting enough RAM in devices to handle a reasonable install of software and databases, leaving out reset holes, shrinking battery life, changing to obscure flash card formats, etc - Palm isn't paying attention to what they are doing and it shows.

I certainly can't disagree with you - it's pretty shocking, especially shocking that it remains there at the time of this post.

RE: huh? It's fixed now - and SPain is present as well

I am really looking forward to what ever will come from Palm, but when I remember correct, I never got an email with further infos from any palm device ever released :D f*** those SignIns!

From the "proxy filing" having to do with the purchase of about a quarter of PALM by a private group.

So what's the consensus date for Foleo launch, eh?

Do you think that Sept 12 will also bring the release of the new palm Desktop. I am hoping to get a few colours and additional features. Aarrrgh!

From the Great White North
Kudzu62

More photos of the Centro

This time from french site pdafrance.com .
It's a white Palmos version, something we haven't seen before. In one picture it is shown side by side with a blackberry pearl (looks like it's bigger than the bb).

They don't say. I wouldn't think so, though.

The images show the word "Orange".

Before they completely slip out of people's consciousness.

ouch! not even ONE palm unit in the top 10

That's a REVIEW. What are the SALES numbers?

It doesn't matter what sales are(longer term). All that matters is the Me-Too Media is NOT talking about PALM.