Palm recently offered a special online only limited edition Black Tie Treo 650 in honor of Palm's 10th anniversary. The Black Tie Treo sold out in a week. The bundle includes the Treo, the new Palm hard case and a multi-function pen stylus. Read on for some unboxing pictures and a up close look at this limited edition Treo...

The Black Tie Treo 650's specs are identical to a standard Treo 650 save for a a special black styling and silicone coating on the unit's housing. This coating is a grippy black layer that uses the same material found on the new hard case. It feels very nice in the hand and gives the unit a nice overall classy and elegant look and feel.

The Black Tie edition also has the new Palm logo branding, instead of the dated palmOne stamp found on all other Treo 650's. The only other cosmetic difference is chrome accents along the sides and black number keys instead of dark blue on the the keypad. 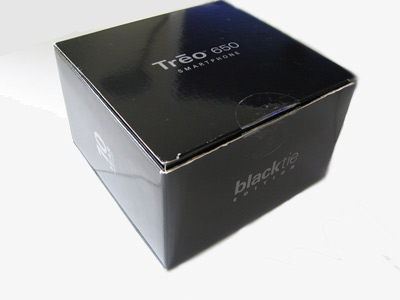 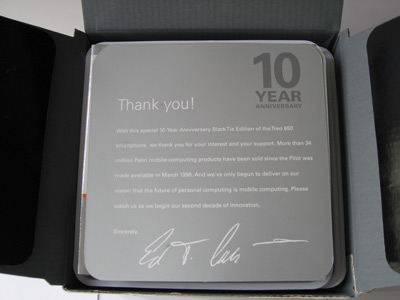 Thank you note from Ed Colligan 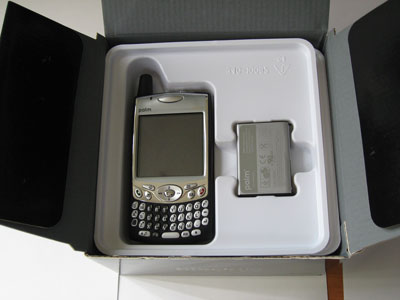 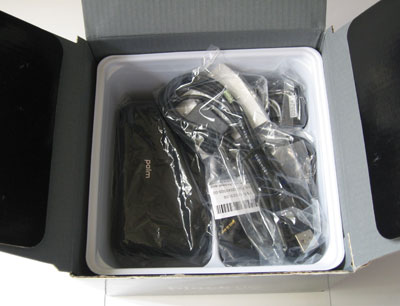 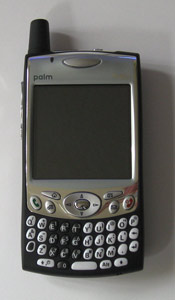 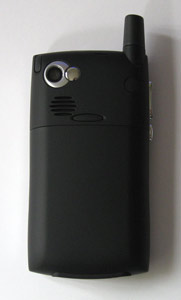 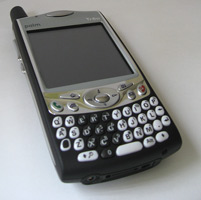 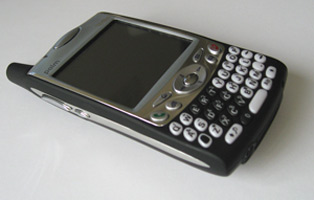 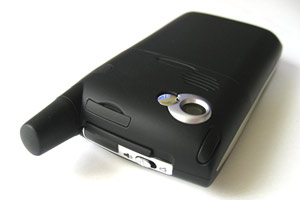 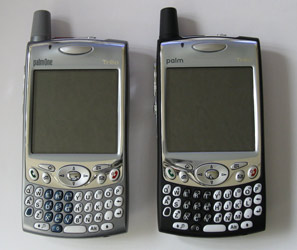 When the siliconized paint flakes off like the Zire 72 they can repackage the original 650 as the "Special Silver Black-Tie Edition." Maybe bump up the price $20. That would make another new Treo release--Ed said there would be four.

When I read about "new" models like this I wonder if this really is all Palm can bring to the game. If so, it (Palm) must be seriously hurting, if not near death. Sad. They used to be so innovative.

If you think this is one of the 4 new releases Ed mentioned you need to get off the crack...

3 new Palms for 2006 down, one 700P GSM to go for 2006. Palm should be set to dominate the mobile device market for the next 3 years before any more upgrades are needed. Woohoo!

Well of course I don't think that this is one of them that Ed referred to, but the Ed's rollout deadline for 4 new Palms is fast approaching. What I really believe is that Palm won't get them all released before this self-imposed deadline. If you then look for the 4 new ones this special edition may have to count. I'm just frustrated and tired of waiting for my TX with a phone.

TX with a phone? No thanks. I'm sure most people are asking Palm to build sexier Treo's - not bigger and even less pocketable.

> ...What I really believe is that Palm won't get them all
> released before this self-imposed deadline...

Of COURSE PALM will release the next two TREOs before midnite December 31st!

When a CEO promises something over and over again like this, he "delivers". Period.

Fortunately for him, HE gets to decide what he delivers!

It's a bitter little freakout that reads these reviews and looks at these pics...

I hope they saved some for the rest of the world.

Don't want to sound like a cry baby here but I want a Palm TX Black Tie Edition also! :)

Now that there is a settlement with Xerox, add single stroke Ts and Ks, etc on the TX|Black-Tie edition. ;-)

Now that there is a settlement with Xerox, add single stroke Ts and Ks, etc on the TX|Black-Tie edition. ;-)

Yeah, then they could legitimately call it an upgrade too. ;)
Sign me up for the preorder!!

I think the cell phone manufacturer's are catching up. Nokia and Sony Ericsson are almost there to change some our minds with their E61 and P990i. I see many Blackberry models around, with my clients especially, after they saw my Treo 650. I think the added weight and advanced features are more than they need. Most don't need a camera or SD memory slot. I hope Palm's next Treo will blow everyone, but if not, I'll be ready to switch to something more modern. Treo's that have come out this year don't make me want to upgrade from the 650.