The Sprint-specific version of last month's Verizon ROM update for the Treo 700w/wx is now available for download. This updater brings the Sprint 700wx up to software version 1.15.

The main feature of this update is, similar to the earlier Verizon versions, EVDO Dial Up Networking (DUN) capabilities in addition to Bluetooth A2DP support for audio over Bluetooth stereo headsets and various hands-free enhancements. Since the older Treo 700w was a Verizon-exclusive device, only the 700wx enhancements are pertinent to Sprint's update. 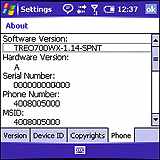 Palms support page advises that this updater is designed for both 1.13 and 1.14 ROM versions of the 700wx on Sprint. The installer is launched directly from the Treo and does not require the use of an SD card. The Treo must have at least 4MB of program memory and 4MB of storage memory available to run the update routine.

Verizons Treo 700p/w/wx updaters alongside the Hotsync-installed Sprint 700p update were removed last week and have not been reissued. Sprints 700p SD-based updater does remain available for download. It would appear that this new Sprint update is devoid of the bugs that plagued the Verizon updaters and is safe to download and install.