This latest update in the PalmInfocenter's series profiling the comings and goings of Palms retail store presence brings only minor changes from our previous reports. Unsurprisingly, the same three handheld stalwarts of Palms handheld lineup, the TX, E2, and Z22 solder on essentially unchanged since their 2005 launch.

Read on for the full report.

I recently visited two local Best Buy stores. One is an older large-format store with a full furniture and appliance section while the second one is a new, slightly smaller-format store with only a smattering of appliance offerings and a greater emphasis on televisions.

I found the Palm section at the newer store unchanged from its previous location. The Palm PDA lineup saw all three models accounted for but dismally wedged between some PC peripheral overstock, hp financial calculators and a handful of cut-rate digital diary type devices.

The older Best Buy store was in the midst of a remodeling during my visit. I was pleasantly surprised to find a recently updated Palm area. This store (the location of the last known LifeDrive sighting) had seen its lone Mobile Manager disappear but in its place was an ample selection of the three handheld models. The Tungsten E2 was in its updated Palm packaging and there were actual demo units on display for the first time in several years. I havent seen a Palm device available for fondling since 2005, when Best Buy jettisoned PDAs from its cell phone and MP3 player department and relegated them to the depths of the calculator department. These demo units were unfortunately non-working dummy units but they were in good cosmetic condition.

I did notice a few oddities in the Best Buy display. The bright orange Palm logo was prominently displayed everywhere but, strangely enough, the displays backing panel had the new Palm logo but in a bland bluish-grey reminiscent of the old Palm, Inc. logo. Even stranger (though commented on during my previous visit to Best Buy) was the fact that the E2 and Palm TX were selling above Palms MSRP! The E2 was priced at $209.99 and the TX at $314.99. I suspect that even though PDA sales are declining, this small discrepancy does not help matters. The small 5% increase in price establishes a potential mental roadblock for a consumer (ie, the old $299.99 appears to be cheaper than $300.00) and is out of place for Best Buys usually aggressive pricing policies.

As usual, no Treos were available in the wireless phone department, but a decent selection of Palm-branded Treo (and PDA in some cases) accessories were present mixed in amongst the cell phone accessories toward the front of the store.

So no major changes for Best Buys strategy or selection but while it was nice to see an overhauled PDA display and a full line of handhelds I really cannot fathom their questionable pricing strategy. 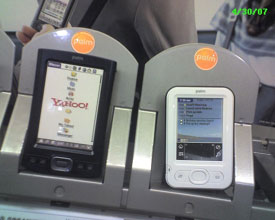 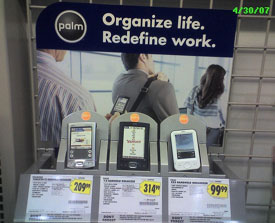 The end is nighat least for PDAs available in-store in Circuit City! My previous trips to Circuit City (less frequent than to Best Buy due to being less conveniently located and generally a less compelling product mix) over the past few months showed a handful of Palm and hp PDAs in a pretty sorry condition.

However, the previous experience with a neglected PDA display didnt prepare me for this! Visits to my two closest CC stores revealed the sad fact that PDAs have been yanked off the shelves entirely. This comes as something of a surprise as the PDAs had been rather prominently displayed amongst the high-trafficked laptop area of the store. But as of April 2007, the only remnant of a decade+ of Palm OS devices in Circuit City stores were three bedraggled copies of MDMs Madden 2005 MMC games, still tagged at $29.99. Truly a sad sight to behold!

All hope is not lost (yet). Circuit City are still promoting Palm (and iPaq) devices on their website. Unfortunately the available stock has been reduced to the Z22, the Sony e-book reader, the aforementioned hp iPaq, and a Garmin iQue GPS WinMob device. It appears that Circuit Citys recent sale offering tremendous savings on the TX and E2 was enough of a success to clear out their remaining stock on these models. Its time to bid farewell to one of Palms earliest partners--actually their only original big-box, brick and mortar retail supporter. 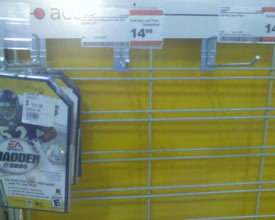 I visited the two (thankfully not closing) local CompUSA stores over the past two weeks. During these visits I noticed, unsurprisingly, a continued downsizing of the PDA/Palm Inc. offerings. I was worried that these stores would resemble demilitarized zones due to the recent negative news swirling around the companys latest earnings and a huge round of store closings. Fortunately, things were business as usual at both local CompUSA stores.

The usual Z22, E2 and TX were all still present and attached to the nifty orange Palm display area. Unfortunately, at store #1, the TX had joined the E2 in the great PDA beyond and only the little Z22 still powered on. Store #2 did not have a Palm Z22 on display but its PDAs were (mostly) functional.

The accessory selection, always a CompUSA strong point, had seen another minor downsizing and relocation. Now all of the Palm-related stuff had been shuffled to the back row of the low-margin items and mixed in amongst the Treo, iPod, and cellphone accessories. I saw a pack of Z22 Air Cases on clearance and most of the older Palm stuff (LifeDrive cases, for example) had disappeared but things were otherwise about the same as before. I still saw a reasonable selection of Rhinoskin cases for both Palm handhelds and Treos (this is where I purchased my current Treo 700p case, recently reviewed here).

For those of us who need a certain accessory ASAP and dont live near a Franklin Covey or Palm store or kiosk, CompUSA remains the best bet. Despite the downscaled selection and inconsistent inventory from store to store, its still worth visiting, especially if you need a case. 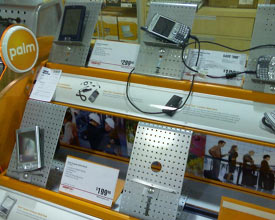 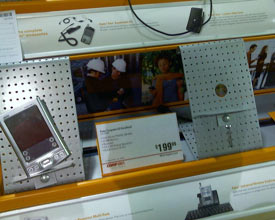 Other than the removal of the now-discontinued LifeDrive, Office Depot and Staples were completely unchanged from my previous visits in 2006.

Other Stores
Due to time constraints, I was unable to visit the local Office Max or Franklin Covey stores. Also, the only Palm store in the area is located in the airport terminal past security so I have not had the opportunity to visit it recently.

Springtime is traditionally a strong selling season for PDA and handheld-type devices. With college graduations and Fathers Day occurring in close proximity to each other, its only natural that companies such as Palm flog their wares during the last big shopping season prior to the back to school sales of late summer. So those desiring a factory-fresh Palm handheld as well as owners of an older Palm OS device might want to keep an eye open for clearance sales.

With no rumors of any new non-Treo Palm devices on the horizon, its likely that retailers will continue to clear out stock of handhelds in favor of more popular, higher-margin items. So the probability of finding a good deal on a brand-new Palm handheld remains high. Ive already purchased a 2nd Palm TX and stashed it away as a backup and I encourage others to do the same, especially if you are worried that finding new or mint condition Palm handhelds in the near future is going to become difficult.

More than PDAs being cleared out at PALM retail locations

Ok, they figured out that some people prefer thumbpads, yet none of their pda's have thumbpads. And none of the treos have wifi. The treo model numbering makes no sense. What are they going to do when they get up to to the Treo 1000?

If only there was some competition. The competition is either too big devices with slide out keyboards or crippled with non touch screen (ms smartphone os).

No one can seem to get it just right. I kind of like the hp thumbpad smartphone, but wish it were a pda instead because I already have sprint cell service.

I agree, imagine 2 year old ipods on the shelves or anything else such as TV's. I don't know if it really is about competition since Dell killed off their Axim line of devices. As we have read before, PDA's are losing out to smartphones and mostly running Windows Mobile in North America. Europe is mostly Symbian from what I have read.

I like my TX and motorola razr v3 combo, but there has to be something better. Treo's are bulky from my experience and looking at new devices from other manufacturers. I think Palm and hope, they have something in the works. It might be something great and hope it comes out soon. Maybe they are focusing on the iPhone too, who knows. But to build a Palm store and sell 2 year old devices along with Treo's, if they can provide cell activation too, is ridiculous. Guess they are putting all their eggs in the Treo basket.