Treo 755p Makes it to Verizon At Last

Palm OS fans on Verizon Wireless finally have a reason to rejoice. Today marks the official release of the Treo 755p on the Verizon network, a full six months after the devices release on Sprint. Signs of the 755's release on Verizon have frequently appeared and disappeared over the past six months before customer reports of 755p availability through Verizons B2B channels began trickling in last week.

The Palm Treo 755p from Verizon Wireless is available for $399.99 after a $50 mail-in rebate and new two-year customer agreement. Customers who purchase a qualified voice plan along with a data plan may be eligible for an additional $100 credit making the Treo 755p $299.99 for those customers. 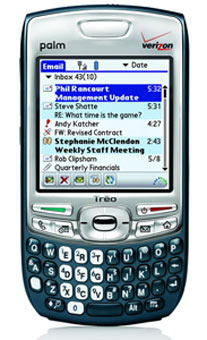 Treo 755p users also have the option of using Verizon Wireless' Wireless Sync, an exclusive feature not found on other carriers' versions, for quick and easy access to personal or corporate e-mail, contacts, calendar, and tasks from their home or office PC. Customers can sync up to 10 POP3 or IMAP e-mail accounts, including AOL, Yahoo! Premium and more with their Treo 755p. Wireless Sync supports Microsoft Exchange, IBM Lotus Notes and IBM Lotus Domino.

The CDMA 2000 EVDO Rev. 0 755p is Palm's first antenna-less CDMA Palm OS Treo and has been available on Sprint's network since May. The PIC review of the nearly identical Sprint version of the 755p can be found here. Verizon Wireless Nationwide E-mail plans for the Treo 755p begin at $79.99 for 450 anytime voice minutes and unlimited e-mail.

In other 755p news, accessory specialist Seidio already has ramped up its online store with an azure green door for their extended-capacity 755p battery. The Verizon version can be distinguished from its other CDMA stablemates by a unique "azure green" color scheme. The older versions of the 755p on Sprint are offered in blue and burgundy versions alongside with Alltel's sleek black version.

Got my order in

Just put my order in! Should be here in day or two.

Congrats! When you get yours, would you please take a few moments to post here the version numbers of Blazer, VersaMail, PTunes, DTG, Messaging, as well as how much RAM is available out of the box? And feel free to anything else that looks different or changed from what Ryan reported in his Sprint 755p review. I'm curious to see if there were any specific "issues" that Verizon felt needed to be addressed before shipping the 755p (and in turn devastating Palm's quarterly financials).

Also, can you please let us know if a Vista-compliant version of Palm Desktop 6.2 is included on the software CD or if they do the same as with the Centro and instruct you to download the beta version (ugh).

Personally, I'm waiting to see if anyone who has/had a 700p picks one up and gives some indication of if/how well any of that device's reported problems were resolved with the 755p.

Thanks for the heads up & the info.

I normally find the HoFo crowd, while dumbphone diehards and a friendly bunch, not nearly as "up" on POS as the PIC/TC/BH/1src faithful so I don't pop in there as often as I should.

Also seems odd they did not include the latest 4.0 version of Versamail, which is currently only available on the Centro.

Unless....these things have been "in the can" and sitting in a warehous ready to go for months while Palm & Verizon bickered/argued/tested and retested these things in order to try and certify them.

The best we can possibly hope for now is a huge ROM update down the road for all versions of the 755p to at least bring it up to par with the Centro as far as Blazer/VM and maybe some of the Garnet bits. I doubt they'd upgrade Google Maps, DTG, & PTunes because of the licensing costs/fees associated with doing that.

I decided five months ago that I was tired of carrying around a cell phone and TX and have eagerly been waiting for Verizon to release the 755p. Now it's here and it is only offered in green? Of all the 755p colors green is the last one I would choose. Did Palm have to make colors exclusive to each wireless company? Blue would have been my choice if offered, but even basic black would have been acceptable. I'll probably still get one because Verizon is the only network that works in my home, but I am disappointed after all this waiting.

I have no idea what that means, but I'll try to let you know when mine arrives.

Thank you Harold. I'll look forward to hearing what you think of 'azure'. More importantly, I'll be looking for reports of your experience with your new treo as you use it.

Got the unit. "Azure" means sea green. It's practically grey. The greenish tinge is barely noticeable. It actually looks quite nice. I sent PIC a more detailed analysis, and I have unboxing pix if they let me post them.

I'll post updates as I continue to get comfortable with it.

Verizon got the 755p into my local corporate (?) store last night and I went to look it over. While I was only able to check a few things, is appears that nothing has changed since Sprint released it... I'm not sure why it "failed" testing all year.

Not surprising, but certainly disappointing. :(