Luke Skywalker has returned to his home planet of Tatooine in an attempt to rescue his friend Han Solo from the clutches of the vile gangster Jabba the Hutt. Little does Luke know that the GALACTIC EMPIRE has secretly... no, wait, that's Star Wars 3. This is Partners in Precrime 3, the epic conclusion to our series analysing Palm's publicly announced webOS software partners.

Subject to scrutiny this time around are MovieTickets.com, Fandango, SplashData, AOL, Telenav and Chapura. So smuggle your lightsaber into the nearest available astromech droid, bone up on your Jedi mind tricks and slip into your favorite gold bikini as we board the sail barge for the end of this opus... and actually, leave the gold bikini behind. Thanks. 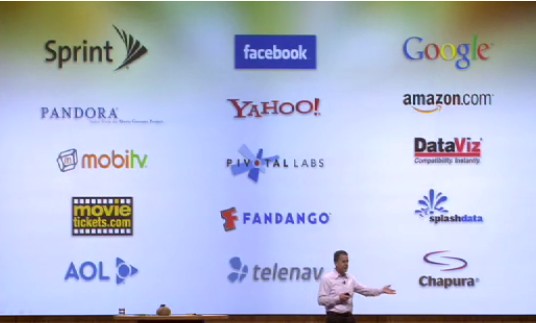 One last time, let's refresh what we know so far of webOS:

Who are they? Okay, so it's cheating a bit to lump these two together, but they're much of a muchness. Both services are online web portals that offer the ability to purchase movie tickets online, with MovieTickets also offering international services in Canada, the U.K. and Ireland. Between the two of them, they cover almost every commercial theatre chain. Fandango also has its "My Fandango" service, which allows you rate movies and connect with other users. Additionally, there's a slew of movie industry news and trailers available on both sites.

What are they bringing to webOS? It seems fairly obvious what will be on offer here: the ability to purchase movie tickets on-the-go from your Pre. Both sites already have some decidedly bare-bones mobile editions available, but with the more advanced graphical and hardware integration options available on webOS we'd expect to see something a cut above those.

For instance, location-based cinema searches are an obvious addition: you'll be able to use Pre's built-in GPS to locate theatres near your current location, wherever you happen to be, and compare prices and show times before making your choice. The rich multimedia capabilities on offer in webOS, coupled with the 3G radio, should also allow you to stream trailers while on the move.

If you're buying tickets days or even hours in advance, you'd also expect the apps to be able to create Calendar events to remind you of the date & time.

One final option for phone integration leaps out at me: the way I usually round a group of people to see a movie is via a group-SMS message. How bout an option to automatically send invitations to your friends when you're buying tickets? 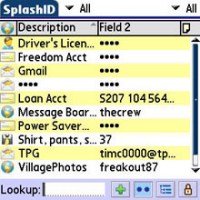 Who are they? SplashData are old hands on Palm OS, with their flagship SplashWallet suite of apps offering everything from shopping helpers to photo viewers to money managers. Their pièce de résistance, however, is SplashID, a top-notch little app that provides a secure (encrypted) place to keep all your personal information on your handheld, from passwords to ID numbers. Nowadays, like many of the old-time Palm OS developers, you can also find their stuff on all the other major mobile platforms, from iPhone to Blackberry to Windows Mobile. We reviewed SplashID 4 for Palm OS in 2007.

How will they integrate with webOS? SplashData have told Palm Infocenter that they've "been working with Palm to ensure we can support the launch with a new version of SplashID", so we know what their first contribution is likely to be. With plans to leverage their HTML/Javascript code investment in their online SplashID Live service, it's likely that the webOS version of SplashID is going to look very similar, with options to subscribe to the online service and keep all your data backed up there.

One very useful way it could hook into webOS would be plugging into Palm's web browser as a built-in password manager, similar to the super-handy feature in Mozilla's Firefox desktop browser. Picture it: when you enter your username and password , SplashID could pop-up in the notification area, asking if you'd like it to remember the password. When you revisit that page, SplashID could pop-up again and ask if you want it to automatically enter the password for you. In this era of multiple registrations and passwords scattered all over the Internet, such a "second brain" quickly becomes indispensable.

"Security issues!" I hear you cry. "What if someone were to steal my phone? They'd have everything!" There's a simple solution: the pop-up could have its own simple four-digit PIN code, or maybe some kind of secret touch/gesture combination. Now you only need to remember one password, instead of hundreds. Cool eh?

This is dependent, of course, on Palm allowing browser plugins. Palm vice president of software product management Pam Deziel has told PCMag that "we don't have a large effort behind [developing browser plugins] at this point" - so we'll have to wait and see.

Who are they? The former king of U.S. dial-up Internet, AOL (formerly America Online) are an ISP who in recent years have attempted to reposition themselves as a provider of online services, similar to rival Yahoo!. Their most popular services would easily be AOL Mail - which is the number-four webmail provider - and AOL Instant Messenger (otherwise known as AIM).

How will they integrate with webOS? We'll get the obvious out of the way first: Synergy integration of your AIM & AOL Mail contacts would be a key feature. AIM would also be a valuable addition to webOS's IM/SMS mega-messaging, given its popularity (52% of the IM market in 2006, HYPERLINK according to Wikipedia).

Then there's the not-so-obvious, and here we turn to AOL's suite of iPhone apps for inspiration. Their offerings include:

Finally, this last one's just a pet fantasy of my own, but given that AOL own Nullsoft, creators of the (excellent) Winamp media player (as well as SHOUTcast), there's the possibility that we might see a webOS version of the venerable app appear as an alternative to the built-in music player. 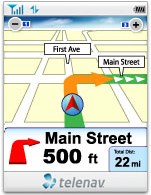 Who are they? The self-proclaimed "global leader in location-based applications delivered via a mobile device", TeleNav partners with every major wireless carrier and a lot of device manufacturers. Rather than selling stand-alone software and map packages like rival TomTom, Telenav offers a subscription service that sends maps over-the-air to your mobile. They've been available on Palm devices since late 2006.

How will they integrate with webOS? This is another one that doesn't require much speculation. TeleNav's specialty is GPS navigation and tracking solutions, and they've been generally well-reviewed wherever they've turned up. Pre's 3G radio will make the downloading of maps over-the-air a snap, and webOS's multitasking capabilities will allow you to receive turn-by-turn directions via the notification area no matter which app you're currently using.

Who are they? Developers of the PocketMirror Outlook synchronization package for Palm OS, Chapura have been around for a long time, with their website telling us they're bundled with "over 25 million Palm OS handhelds". They're the kings of third-party Outlook sync and can legitimately claim to best Microsoft's own offerings on Windows Mobile.

How will they integrate with webOS? It would seem obvious: they're going to be a major part of Palm's drive to sell webOS and Pre to the "fat middle" of the mobile market. With Chapura on board, Palm will be able to put some serious weight behind their pitch pushing Pre as a genuinely productive business device as well as a consumer product: robust Outlook sync is truly a killer app here.

The following three companies are well-known for participating in shady software-as-service circles around the globe. Although they have not yet been formally linked with Palm's Precrime syndicate, investigations are still ongoing.

Microsoft: Although it may be difficult for Palm to entice them onboard with webOS, given they have their own interest in selling Windows Mobile, Microsoft a partner Palm would want. Microsoft's most popular online services  Windows Live Mail (formerly known as Hotmail) and Live Messenger  would be huge assets to webOS's Synergy.

Twitter: It's exploding in popularity and serves as social network, news feed and instant messenger all rolled into one. The short-message format is ideal for squeezing into pop-up notifications  and how about a "Tweet this" option in the web browser for fast distribution of links?

eBay: If Amazon is the Internet's department store, then eBay is its flea-market. An eBay app that would allow you to keep live tabs on your current auctions via the webOS dashboard is so obviously useful (how often have you found yourself madly clicking "refresh" on an item page, making sure some opportunistic bastard doesn't outbid you at the last second?) that we'd expect to see one sooner rather than later  even if eBay themselves choose not to make it.

And with that, ladies and gentlemen, Partners in Precrime comes to its conclusion. Palm's done a great job enticing some big names on board with webOS, and the potential for these companies to help them drive mobile multitasking to the next stage of its evolution is exciting indeed. In the intervening weeks between now and the CES unveiling of webOS, we've also seen Adobe and MySpace announce their intentions to join the party and I doubt it's going to stop there. Palm Infocenter will of course be keeping its bloodshot LCD-strained eyeballs peeled and our PRESS hats tipped at a jaunty angle, ready to bring you the latest. Stick around!

The presentation screen shot looks like the desktop of every new computer I've bought before I deleted the trash.

Gee. I think movie tickets on line on my new phone is really the deal maker. Or maybe Facebook. When I'm driving home I would like nothing more than to be able to look at Suzie's rad new pics and write on her wall. All that PDA organizer-reference stuff is for losers. I can't see how I"ve lived without the Pre in the past. All cool fluff stuff and no boring work-related stuff to bum me on this most excellent day.

RE: Seen this before..

When you're driving you shouldn't be using your phone at all, Tucker. :P

One upsetting possibility of MovieTickets and Fandango dawned on my today.

Both are AIM bots. It would royally suck if that's all Palm does with them: leaving them as AIM bots. If Palm doesn't make full-fledged applications, I will be soooooooo happy! :D

I tried to formulate a reply, but those last two sentences have made my early-morning-brain explode. You're saying it'll suck if they don't make full-fledged apps, but if they don't it'll also make you... happy? (BOOM)

NO! The prequels don't count. :P

Jar-Jar was nearly enough to make me write them off, but Hayden Christensen sealed the deal. (I've never seen a more wooden actor in my life.)
Tim
I apologise for any and all emoticons that appear in my posts. You may shoot them on sight.
Treo 270 -> Treo 650 -> Treo 680 -> Centro