iFixIt Tears Down the Pre and Touchstone

It's a rite of passage for any new gadget: a painstaking, inch-by-inch public autopsy. We posted earlier about a similar Pre disassembly gallery, and now iFixIt has also posted another Palm Pre guts gallery along with a similar treatment for the Palm Touchstone kit. PhoneWreck's analysis goes another step forward with an interesting Palm Pre parts analysis:

There are some pretty interesting things that popped up on the Pre's PCB's. This is the first production device we've seen on the OMAP3 (Open Media Applications Processor) platform. OMAP3 is powered by the 600MHZ ARM Cortex A8, PowerVR SGX 530 (GPU), 430MHz C64x, DSP and ISP (Image Signal Processor) and was clearly designed to pack a punch. [...]
The OMAP3 PMIC comes loaded with a USB tranceiver and Audio codec which even further reduces the overall board density of this device. We're not fully sure - but it looks as if the Pre's cool new multi-touch Touch Screen Controller win went to Cypress Semiconductor with the CP6944BA device. 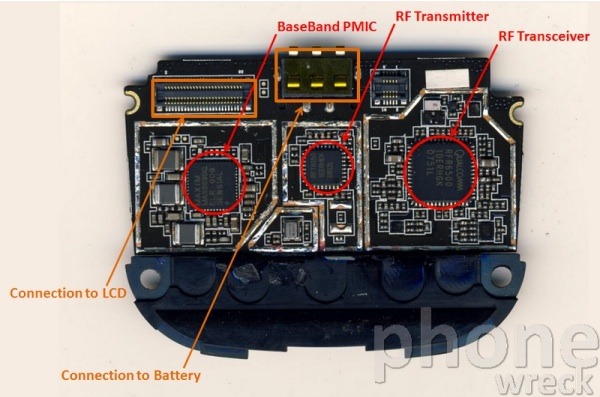 Thanks to Kyle Wiens and Tim Carroll for the tip and opening liner.