The intrepid investigators at PhoneArena have been tipped off to some hot news: two not-quite-mysterious Palm devices have appeared in Verizon's inventory database. (pictured after the break) Code-named the P101 and P121, the general assumption of the Internet seems to be that these are, respectively, the Palm Pre and the rumored Palm Eos.

As Phonenews.com reported back in March, the Pre was codenamed P100 on a leaked Sprint roadmap, so it's quite likely that the P101 is the Verizon edition. And since Eos is the only other webOS device of which we have even scant evidence thus far, we can guess that's the P121. Unless Foleo 2 is coming sooner than expected. 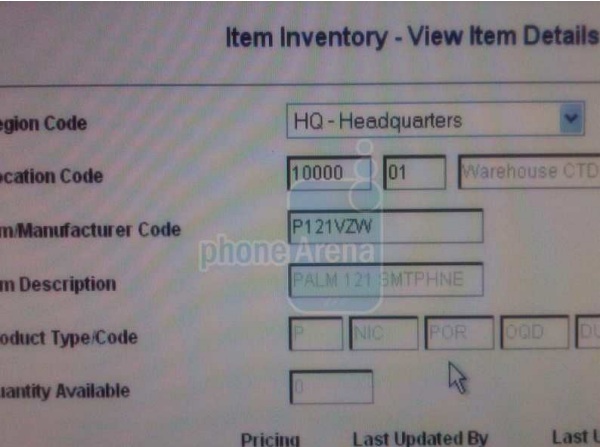 So what does this tell us about a possible release date?

There are several regular contributors who seem to have a good idea of how the process works when carriers decide to add a new model. If the Pre is in the VZW database, how long before we see it on the shelves?
David
Palm III> Palm IIIx> Palm IIIc> Sony T615> Sony T665> Sony TH55> Palm T|E> Palm T|E2> Palm T|X

Sprint says not til next year for Verizon with the Pre.

There may be OTHER WebOS devices, however...

i hope it comes out by april next year so at least i have the option to get a pre still not sure if i want one or switch to a wm phone... well see what verizon offers
or maybe ill just get another palm centro idk.

Someone elsewhere commented that BOTH Sprint and Bell Canada are using the same P100 (or something) number. This would suggest P101 and P102 are NOT CDMA Pres.

Hey! Wasn't there an LTE rumor around here? Or was that on Engadget...

If that is the case, 101 could also imply a Pre with slightly beefed-up specs, which Palm has done before with the Treo 700wx. Maybe 16GB instead of 8.

A local VZW manager is adamant that his Palm rep told him they will carry Pre in 2009. True or a ploy to make me wait longer on Verizon.

So are you Verizoners getting one?

i find it odd that almost nobody here owns a Pre. and don't blame Sprint - AT&T sucks yet that doesn't stop the iPhone.

I will be getting one as soon as it comes available on VZW. However, I am not willing to leave VZW for either a Pre or an iPhone (as I sit typing on my iPod).

I would have had one by now if it was on Verizon. Unfortunately, I've tried both Sprint and ATT; neither had the coverage I needed between Colorado and Kansas, so I've stuck with my Verizon Centro.

I MAY buy one for Verizon, depending on what happens in regards to the world of 3rd party apps, Palm-issued firmware reports, competing Android devices, how my 755p contineus to hold up and any hardware spec bumps for Verizon between now and next year.

So, basically, while a Pre on Verizon has far more appearl to me than a GSM or Sprint Pre, it's by no means a done deal. I think that the Pre has weaker PIM functionality than a Garnet device and is inherently less functional (no stylus, no memory card slot, no IR, smaller keyboard, feeble 3rd party app selection, weaked bundled software assortment, no Hotsync, no tethering, smaller battery caapcity, no onscreen keyboard) in so many ways.

hkk - my guess is that you'll buy one as a novelty but keep and eventually go back to the 755p.

Probably. I broke down and bought a 700p on eBay earlier this year because I had to give up my Blackberry when I changed jobs and I wanted to wait out Palm releasing the Pre on Verizon. I will need to spend some time with one before I decide. If Verizon cripples it too badly, I may go with something else. I keep waiting for the iPhone to come to Verizon, but I may retire before the ATT exclusive runs out.
David
Palm III> Palm IIIx> Palm IIIc> Sony T615> Sony T665> Sony TH55> Palm T|E> Palm T|E2> Palm T|X>Treo 700p

You are probably right. I need a new something or another to biotch and moan about. So, ~1 month trying to make do with a Pre as my primary voice & organizational device will probably give me plenty of reasons to want to go back to the good ol' bad ol' days of Garnet.

So will be waiting for a while it seems. Has anyone tried porting Garnet to a Treo Pro?

RE: I need unlocked GSM

This will be great for app sales, once developers are actually allowed to charge for their apps probably close to mid September.