Palm today has launched their new fall handheld lineup. Palm has introduced two new Tungsten handhelds, the T3 and Tungsten E and a update to zire line with the new OS 5 Zire 21. Palm has also dropped prices on some of it's current models and has discontinued the m515 and m130.

Tungsten T3
The Tungsten T3 handheld is Palms first device that supports a high-resolution color screen in landscape, as well as the typical portrait mode. The screen display is 50 percent larger than on any previous Palm branded device.. With integrated Bluetooth, a 400mhz XScale processor, 64MB of RAM (52MB user available), and superior office and multimedia capabilities, the Tungsten T3 handheld offers exceptional performance in a compact design for an estimated U.S. street price of $399. Read the full PIC review here. 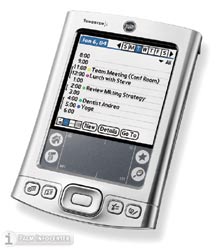 Zire 21
The Palm Zire 21 handheld offers more software, a much faster processor and four times greater memory (8MB, 7.2 user accessible) all at the same low $99 price point. The Zire 21 is an affordable and easy way for the first-time handheld-buyer to juggle daily tasks surrounding work, family and social activities. 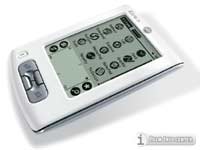 The Zire 21's dimensions are 4.4" x 2.9" x 0.6" inches (112 x 74 x 15mm) and weighs 3.8 ounces (108g). New software essentials are included on the Zire 21 handheld installation CD. Users can keep track of birthdays and anniversaries, automobile maintenance, passwords, and expenses, as well as read an eBook and play games with software included in the box. A hands on PIC review will be forthcoming.

The Zire 21 handheld is Palms sequel to the fastest-selling handheld in history, said David Christopher, vice president of product management for Palm Solutions Group. With the same great price and ease of use, the sequel offers more memory for data and applications, as well as faster performance. We expect the Zire 21 handheld to be another hit with first-time users and gift-givers.

All of the above handhelds are available now in most countries worldwide via consumer-electronics outlets, major retail chains and online e-stores. They can also be ordered online from the Palm.com webstore.

Price Cuts
With the addition of the new models comes a few price cuts and discontinuations. The m515 and m130 have officially been retired. The original Zire has been lowered to $79, while the Tungsten T2 has been reduced to $329. Many retailers are also offering discounts on the Tungsten W for around $299.

bcombee @ 10/1/2003 2:28:07 AM #
I'm curious about the sound capabilities of the Zire 21. While is doesn't have an output jack, it does have a speaker; is this speaker and sound system just capable of making alarm beeps, or can this actually play back digitized sounds? With 8MB, there's room for a small Ogg or MP3 file, stored as a file stream. Not too practical, but useful to know for game developers that might want to target this device.

I guess Palm just want Zire owners like me to upgrade to higher end models like the T|E. There is no upgrade path for the 99 dollars model. Too bad!

Low end and the mp3

Quik_Fix @ 10/1/2003 9:48:06 AM #
I don't think we should ever expect to see mp3 support in the lowest-end models. I say this only because there is a contingency of people out there who really want simple Palms and they may actually NOT buy a Palm because it has mp3 support. I think they're trying to keep that end of the stick real basic. Just my $.02

What i'm interested in is seeing how the Zire21 competes with the original Zire. Now that the Zire is only $79, it may just keep being the top seller!

LiveFaith @ 10/1/2003 12:57:02 PM #
Uggh. Awesome device at good price point. But, size is growing and screen real estate remaining the same. Seems to me that the ideal portable device would maximize the screen real estate and minimize the "waste" around it. Ergonomic considerations notwithstanding.

Dennizlerim @ 10/1/2003 5:14:19 AM #
This sucks.
Palm has told everybody how proud they were to have a platform third-party developers could ount on, and now they bring out a Tungsten without the Universal Connector.
This is just like Sony has done it...... I really had hoped that Palm would not got the same way

gfunkmagic @ 10/1/2003 5:24:04 AM #
Well I think you're being to harsh here. I think the point Palm is trying to make is that if you want to use PUC peripheral, you're going to have to spend a little bit more. Palm is trying to get all the old V/Vx and M Series users to upgrde to the T2 or T3 not the T|E. Also, if you recall the M515 when initially released was priced at ~ $399 USD, so it is pretty disingenuous to expect an upgrade at a lower price than what M Series owners previously paid for their devices! The T|E is meant for all the new Zire owner etc. Anyway, Palm did release the new IR keyboard for users...

Dennizlerim @ 10/1/2003 5:36:52 AM #
Sure, it's a great price, no doubt of that.
But IMHO telling everybody that the Tungsten series is the business solution for them doesn't shine through here.
How can it be that they take away one of their most proudly presented innovations on their Tungsten line?
With the UC, it would have been a killer device.
Now we have to hope that people don't care much about a docking station, a nice keyboard(not the one with extra batteries), the extra battery pack and all the other nice things that one can buy out there

nipaworni @ 10/1/2003 12:28:51 PM #
I like the idea to move to mini-USB. I used to ask myself why don't all PDA have USB slot so that when I want to print something I don't need to transfer to PC. I can connect printer with PDA and then print. Or I can use my PDA to access files in external HDD via USB. So mini-USB may be the answer since it is more standard than Palm Univeral Connector. I wish in the future all USB peripheral will have USB to mini-USB adapter come with it (the same as mouse has USB and serial adapter).

skennedy1217 @ 10/1/2003 3:32:25 PM #
Another benefit of the lack of UC on the T|E is portability. No longer do you have to go buy a separate travel charging cable or take your clunky cradle with you. With the T|E you just grab the cord it came with and go.

DougG @ 10/1/2003 11:40:39 PM #
I keep hearing people whine about the UC, but really how many people use attachments to their Palms....
Seriously.....When at work or out on the town, have you seen people in large numbers whip out a key board for their Palm or other Palm attachments. I would say not often.

You guys need to realize Palms are maybe sold to 10% computer geeks. And 90 % to people who want color screens, great organizing software, IR capabilities, and hardware that can be accidently dropped 4 or 5 times a year.

So you 10% of Palm buyers chill-out about the UC jive.

P.S. Where is the cellphone....as part of the new Tungstens. :-) That is true functionality for the masses. he heh ha

Yes, maybe Palm does want everyone to upgrade to the T|2 or T|3 but that supposes that people will be willing to sacrifice battery life & pay for features they may neither want nor need.

At least the upcoming TJ25 & TJ35, although they don't come with cradles, will offer the opportunity of adding these rather basic accessories for about $30.

IMO, the T|E delivers more for less money but its Achilles heel may turn out to be this "avoidable" omission.

I've bought 3 Diffrent Keyboards...now I have to get a new one, I bought a Camra...now I have to get a new one...I have other devices too, but those I think are the ones that are kinda popular with us Freaks...and we are freaks by the way...Palm is now starting to move away from a "Universal Connector" to and accuall Universal Connector...USB will evenchually end up on all the Palms, give it time, and then when the next thing come out we'll all be here...complaning again...I mean I had my complants too, but I mean really who cares...its cheaper for them to make it this way, it will be cheaper for you to buy them, they are coming out with this that won't use the damn port anyway so you can use it on modles yet to come, so why complane...shell out another 100 bucks on a new keyboard like I know I will and shut your yapper. We're freaks...but we have a sence of pride about this...I just admited that I"ve owned 7 types of palms...I didn't menchon that some of those I had to reaplace...I'm on my 9th palm...a palm a Year I average...you have to figure I've spent a 1000 on hardware alone, then about 500 on Perifels...and I'm Proud of that...so what...they changing, change with them...thats all I have to say about that.

Can somebody make this clear?

Palm will lose money on each one of these they sell.

Quik_Fix @ 10/1/2003 10:45:04 AM #
They've added additional fields to the PIM core apps for better syncs with Outlook and overall usage. Word has it that they may have removed the 4k limit on memos and notes too... Isn't that it the article above? I forget.

Galley_SimRacer @ 10/1/2003 11:33:40 AM #
I played with a T|E at Office Depot, and it seems that the 5-way navigator really is as bad as people say it is. That one was hard to go both up and down. I went to CC and the dude opened up a T|E since they didn't have one on display yet. That one would go up OK,but the down button was hard to press. I decided to buy a T|E, and mine seems to go down OK, but not up! Palm really screwed up by not either putting the 5-way navigator that the T|T uses or the way-cool joystick that the Zire 71 uses. :-(

--
"Life is what you experience between racing games"
Galley

Imagine a TE with VG and UC!

I'm thinking that if PalmOne did put VG and a UC on the T|E, then T3 sales would suffer badly, and so they decided to go the mini-USB route with a 320x320 screen.

adamrichman @ 10/5/2003 2:58:31 PM #
Yea, T3 with no slider would kick ass. I actually thought about trading my TT for a TE just because of the no-slide. No-slide with VG, UC, etc. etc. would sell tremendously, I honestly don't know why PalmOne is so stupid... Get rid of the stupid thing! I liked it at the beginning, but looking back, a VG with no slider is what I want! Ugh.. maybe it's time for a Sony...

To those wanting a T³ that doesn't slide:

www.rubegoldberg outlines what you need to do in order to convert a stupid, idiotic T³ into a perfect shiny new No-slide T³.