"With the addition of native PowerPoint file support for both Mac and Windows users, Documents To Go is truly an unsurpassed office suite," said Ken Wirt, senior vice president worldwide marketing at palmOne. "Now palmOne handheld and smartphone users have excellent flexibility in working with their Office documents; they can synchronize contracts from the desktop, get the latest numbers sent to them via e-mail, or browse to a network folder to wirelessly retrieve a presentation."

In addition to native PowerPoint, JPEG, and BMP support, new features include a new handheld user interface, support for displaying Chinese, Russian, and Greek character sets, and integration between word processing documents and wireless browsers and e-mail applications. Documents To Go Premium Edition Version 7 is also the first version of Documents To Go that allows Mac users to use PowerPoint files on the handheld. 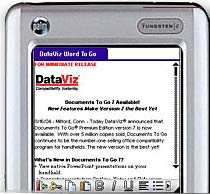 Before native document support, the Documents To Go desktop application converted Microsoft Office files to a special handheld format that Documents To Go could open. Then the files were synchronized to the handheld. With native support, transferring and opening files is even easier, so no desktop application or pre-processing of files is required.

Several new features are offered in Documents To Go Premium Edition Version 7. These include:

-- Native picture support: Pictures taken with built-in cameras are automatically displayed inside the Documents To Go application for easy viewing and e-mailing.

-- Completely new handheld user interface: The interface has been redesigned to streamline access to commonly used features such as Save, Sort, character formatting, alignment, and more. In addition, full screen support hides toolbars and menus to maximize the data onscreen.

Documents To Go Premium Edition Version 7 is available now for download [BUY] and will be available by September 1 in office supply and computer retailers such as Staples, CompUSA, and Office Depot, as well as from online sites such as Amazon, Handango, and PalmGear. The suggested retail price is $49.99.

Upgrade pricing of $29.99 is available for all previous Documents To Go customers, including customers who received Documents To Go as bundled software with palmOne, Sony CLIE, or AlphaSmart handhelds.

$how me the Munny

dweeb @ 8/16/2004 6:22:05 PM #
Yes, there doesn't seem much to warrant a complete new version number. I'll wait until tomorrow to click "upgrade" and see if there's a fee. Like all good apps of this ilk, they've got to a point where it's really good and the upgrades are now things people don't really need.

G M Fude @ 8/16/2004 7:37:04 PM #
A new user interface and new character sets along with native PowerPoint support would seem to be a sufficient reason for a new version. But of course if you don't need these features, don't feel compelled to spend your money on an upgrade. It isn't compulsory.

V7 sounds good to me; I find I'm using PowerPoint more and more with Docs to Go 5 -- almost as much as I use Word to Go -- so native support maybe make life much easier. Version 6 didn't excite me so I didn't cough up the cash, but version 7 is mighty tempting.

Zippy @ 8/16/2004 10:23:06 PM #
Duh, I just got sucked in: I thought it said that it supports PDF files, it does, but not native. That will teach me to not read the description like the most cynical lawer. Software makers deliberately write descriptions that can deceive the inattentive. Although what they are saying is true, the manner in which it is said can often be misinterpreted. Kudos to the Dataviz description writer, very clever: you got me.
Very nice user interface change, but not worth the $29.00 upgrade unless you use powerpoint. which I don't. Oh, well, it's good for the industry.

hkklife @ 8/16/2004 10:40:13 PM #
I'm definitely anticipating on seeing this bundled with the T4 this fall. Maybe even the Premium version!
By all counts, based on my personal speculation, the scuttlebut on the 'net and a source that I talked to a while back, the T4's going to ship with a very strong software bundle--building on what the T3 did last year. PalmOne's learned the lesson when the T|T shipped and hardly any mjaor apps were OS5 compliant and then again when the T3 shipped and little other than the bundled software could take advantage of the screen. I'll guess that we'll be pretty happy right out of the box starting in October (at least as far as the bundle's concerned).

I'll personally stick with DtG 6 until I see what the finalized T4 bundle is going to be.

LiveFaith @ 8/16/2004 11:33:58 PM #
On v6, the jump to 6.008 was the best thing since sliced bread. Listening to the customer and getting rid of that terroristic splash screen (pop-up banner ad) along with the user-option to "search" RAM & SD for documents, made for dramatic improvements in efficiency. If you have v6 below .008, then definitely get the free upgrade to v.008 and you'll feel like you spent $30 for a new version.

D2G is a great useful app, but as someone posted earlier, software vendors get a "success tax" when their product get's well refined, and they have to resort to making ".x" upgrades look like "x." upgrades to keep from laying off the staff etc.

I have a PC Bible program that is in it's 3rd Windows iteration now. The 2nd "upgrade" was absolutely horribly non-intuitive & massively bloated, so I resorted back to my previous, more-efficient version. Now they have another "all-new" release. I'm not about to throw "good $ after bad". Although new "products/references" are of course non-compatible with previous versions. Seriously, how many different ways can their possibly be to reference static information? Not many, but if "x." changes are not made then the corporate party is over. So I look for another all-new upgrade soon. I just hope Windows "Longhorn", "Foghorn", "Leghorn", or whatever they call it is backward compatible with my oldie version when I have to ante' up for it. :-)

Guess I'll just wait to get it free once I buy a wifi palm.

ackmondual @ 8/18/2004 12:11:40 AM #
it's much more of an upgrade for mac users. Not only do they get native PP support, but they just plain get it. Quite a few ppl were bummed that DTG prev versions omitted Mac support for powerpoint

Fuzzillogic @ 8/17/2004 12:36:40 PM #
No, not the native OpenOffice formats, but the MSOffice-exported ones. v5 could read exported Writer-files, but it choked on exported Spreadsheet-files. Is there some improvement in that area?

And what about something simpler: RTF?

Winter_ @ 8/17/2004 7:40:04 PM #
I've been trying to find some reasonable way to put in the T3 some relatively simple documents: syntax-colored source code. It should be simple: single monospaced font, 5 or 6 different colours, optionally some bold and italics, and reasonable respect for white space. And it should be editable!

I thought that D2G would allow me to use the simple RTF docs that virtually all source prettyprinting programs generate, being RTF a known standard. But no luck; I must convert all of them to full Word documents. Then, D2G opens them slowly and darkens colors until they are almost undistinguishable from black. And Word documents have margins, so long lines get wrapped.

But that's the only option available for the Palm OS...

RE: And what about something simpler: RTF?

LiveFaith @ 8/18/2004 10:18:17 AM #
Winter,
Looks like a moonlighting opportunity for you. Then again that other headline says PalmGear will get all your profits anyway. Sorry.
That is strange how d2g does not support that. Common most everywhere, tho I must admit I have no use for it.

RE: And what about something simpler: RTF?

Altema @ 8/18/2004 2:56:25 PM #
Yeah, my wife has not used a desktop or laptop for over half a year for email, but got an RTF attachment last night. She looked at me, I smiled back and said "you have to use the desktop downstairs to read that".

Fixed my pet peeve with V6

Nechasin @ 8/18/2004 9:40:36 AM #
Version 7 fixed one annoyance that I found in Version 6. You had to wait for it to finish searching for documents before it would show you a list and let you select a document. This would increase the time it took to open a file up. Now, it almost immediately shows previous documents, and you can select a document as soon as it is shown. The searching is done in the background.

Your mind resembles the wings of an Ostrich, It enables you to Run, though NOT to Soar! -- Thomas Babington, Lord Macaulay

For example,
-The toolbar is completely customizable.
-The interface is consistent across all applications. It just seems "tighter" and "cleaner".
-It has a funky "circle wipe" animation when transitioning from the main screen to each app. It's novel.
-Native handling of Word, Excel, and PowerPoint docs is stellar. I typically use Repligo to view PowerPoint documents, but Slideshow To Go may prove a worthy competitor.
-Plus a few other niceties.

As always, I am frustrated by the upgrade cost, but it certainly is more palatable than the my infuriating experiences with the constant upgrade costs of Quick Office.

Is the upgrade worth the cost? I don't know yet, but it certainly leaves me with a good feeling after using it for a couple hours...

"Chinese support" and other disappointments

twrock @ 8/20/2004 3:46:32 AM #
Dataviz had me all excited with the promise of traditional Chinese support. Alas, that is only via the CJKOS add-in program, and they didn't choose to support the much superior Hand Dragon Chinese OS (aka Palm Dragon).

But, what I find EXCEEDINGLY IRRITATING is that there is no easy way to uninstall this demo version so I can revert to my bundled version 5. Oh, yes, their documentation says that I can uninstall it through the "add-remove" menu in Windows control panel, but Docs To Go simply isn't there in the list of programs. A trip to the website to get a little help has me jumping through hoops like having to find my registration number in the desktop program that no longer has a registration number because I have installed the demo of version 7. C'mon guys, just write an "uninstall.exe" so that when your installation system fails to work properly with Windows we can still get rid of your program.