Additional details and a new clear image of the possible next generation palmOne Treo smartphone have now been posted. The new image and details reveal a slightly smaller unit with a revised keyboard, a higher resolution screen and bluetooth connectivity. 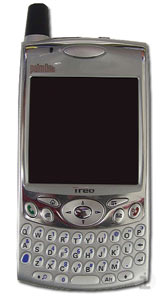 The new photo comes from a discussion thread on TreoCentral. The picture and details are confirmed by a previous leak back in June. That presentation slide showed an image and possible specs for the next generation Treo model. The phone is rumored to be named the Treo 650 (codenamed Treo Ace).

According to current speculation, the next Treo will retain the same basic form factor and layout with a number of refinements and improvements, most notably a new high resolution 320x320 pixel 65k color TFT display and integrated Bluetooth. It will be powered by Palm OS 5.x, have 32MB of RAM and run on a 312 MHz ARM processor.

The upcoming smartphone will also have a new 1.3 Megapixel camera with digital zoom and video capture, new dedicated answer and disconnect phone buttons and a SD/MMC expansion slot with SD I/O. There will also be a number of software improvements including many web browser enhancements. Some other features include a removable battery, push to talk support and a new cradle/cable connector.

The previous source image lists the release timing as Fall 2004, but does not offer any other details on price or availability. You can click on any of the images for the full size view.

Thanks to Guarav and Mike Knips for the tip.

Now if they could only get Verizon to carry it without waiting two years...

JonathanChoo @ 8/27/2004 4:40:24 AM #
This is long overdue...should have came out two months ago...but hei...better than nothing. Performance wise this should be better than HP h6xxx series which uses a Ti processor. The lack of WiFi is not an issue for me too - and I am sure that the recently released PalmOne WiFi card would work on this.

The issue is whether o2 will stock them. For now it seems highly unlikely.

However I have backtracked...at first I wanted to upgrade my mobile to a Treo but now decided against. I am going to keep my mobile and PDA separate for now.

In all due respect, comparing the Treo to one of those HP brick-fones is like comparing a Ferrari Enzo to a Hummer. What good is 600mhz when you have to use a carry cart with wheels to haul it around like luggage through the airport.

This thing is stunning and simply works as every Treo reviewer on earth has already reported. Now with most of the gripes addressed. Yes, WiFi would be a + for those who want it, but a SDIO is probably on the way since the T3 & 72 versions are "out". BT is very useful for phones thanks to the BT headsets.

BTW, at 324mhz, I cannot imagine any Palm OS5 app that would not absolutely "blink" at you to get a task done.

Although, does this Treo look a little taller and "thicker" than the 600?

However, the attention to detail and overall "polish" of this Treo (based on these shots, at least) is very much a pleasant surprise. NOW, guys, what if the "new" connector coming for this Treo is the UC replacement and will gradually be rolled out to the rest of the Tungsten line...standardize Tungstens & Treos (the most expensive PalmOne models, generally) on one connector and leave mini-usb for the bottom-feeder Zires. I really hope we have some sort of a connector standard coming up that PalmOne will at least halfheartedly stick to for a few years. I like the self-portrait mirror, removable battery, new keyboard layout & backlight and dedicated green/red phone call buttons the best, btw. All very nice touches!

dsm363 @ 8/26/2004 11:47:50 PM #
WiFi would have been nice but I agree, I think it's a great product anyway and that WiFi really isn't needed in this phone. Especially if you get the unlimited data plan. WiFi would probably take too big of a hit on the battery anyway.
The thing I wish would change is the amount of RAM. 32MB for this phone works ok but should have been upgraded. It can't be due to cost. Is there some technical reason why PalmOne won't go above 32MB?
Anyway, awesome phone. I'm going to have to trade my Treo 600 in to get this one.

It's rumored that PalmOne is using 64 MB M-Systems based Nand Flash for the Ace. 32 MB would be for ram and another 32 MB for automatic backup file store similar to the way the Clie UX series handles ram. Thus, in case of power failure you would not loose your data which would automatically be backed up to the file store. This would also make sense since the Ace will supposedly have a replaceable battery. IMO, this would be a very smart move since it's a very bad idea to have a phone loose all its data every time you run out of power or change the battery! ;)

Indeed so!!! It's so disgusting on the m125 and the T3. This has caused months of dust-gathering for my girlfriends' m125 after some particularly abject data losses - the last one when the Palm crashed while BackupBuddyVFS was doing the routine night backup. Next morning batteries were dead, memory was empty... and the backup wasn't current. Sooooo desperately nice.

(about a week before that, I had just managed to convince her to try again the m125; I told her that this time BackupBuddyVFS' automated backups would save her data whatever happened... now she's once again -and for the foreseable future- using a non-volatile paper notebook, thanks)

I've heard that Clie's have some backup battery... if only for that they would have merited a better fate than PalmOne.
I guess they simply bet on the wrong OS.

Marshall Flinkman @ 8/27/2004 2:44:36 PM #
It always cracks me up to see someone say "loose" instead of "lose"... here I had the image of the Treo falling over and all these bits of data (pun intended) falling out like someone knocked over a box of Rice Krispies...

I want this Treo, just without a camera! Although I do miss, looking at the pictures, the alternate coloring creating that "mini-number pad"...

hotpaw4 @ 8/27/2004 3:48:15 PM #
And what's with the camera? There are lots of companies practically next door to PalmOne where anything with a camera is strictly verbotten.

It's messed up in that shot - but not the others... someone didn't check their Photoshop'ing work carefully enough... :-)

To come up with a Photoshop job of this caliber would require an incredible amount of effort for a cheap thrill/hoax.

There's no doubt this is the real deal. The only question is when can I buy it? :)

Problem is that I'm really liking this Treo so far. Don't know that I want to give it up for something that may be delayed and/or exorbantly overpriced for the moment (it took T-Mobile forever to get the 600, I'm going to have to pay through the nose to get an unlocked Ace/650).

These shots are great but ...

I have the T|E, loaded with apps, and it would be a great advantage if I could run all my apps on the Treo.

I do know that some of the earlier high-res-only OS5 titles do have problems on the Z31 and Treo 600. A lot of devlopers, with the increasing popularity of the Treo, have gone back and made "downsized" skins or updates for their apps/games just to accomodate the Treo users, Aerodrome Software being just one of several.