While we discussed the original Palm Pre's disappearance from Sprint's web store last week, as of that writing the device was still technically an active model with a bit of inventory presumably remaining in the channel. Now courtesy of an anonymous tipster to Precentral.net, we have confirmation that the Pre is indeed reached EOL (end of life) status with Sprint.

According to the tipster, Only a few hundred new unsold Pre remain in Sprint warehouses and once those are depleted, there looks to be no other WebOS unit in sight for Sprint save for the original Pixi, as the carrier has decided to pass on the Pre Plus, the Pixi Plus, and the Pre 2. Sprint's original Pre was the debut WebOS device, launched on June 6th, 2009 after its unveiling at CES on Janurary 8th 2009. 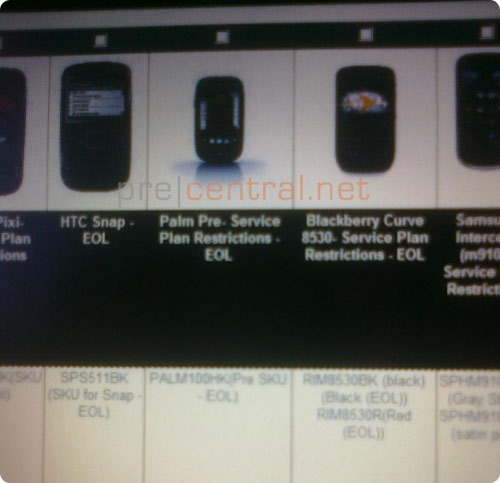 Verizon is the only domestic carrier intending to launch the upcoming Pre 2, though an unlocked GSM version is rumored to be available for purchase direct from Palm, while Verizon's Pixi Plus is slated to live on until March of 2011. Additionally, AT&T still lists the refreshed Pre and Pixi Plus as active devices (along with refurbished versions of both devices) but has made no indication of plans for an officially supported version of the Pre 2.

I am somewhat saddened by Sprint's decision not to carry the future WebOS devices. Until I switched to AT&T solely for the iPhone, Sprint was the only cell-phone provider that I ever had (9 years!) . More importantly, I always viewed Sprint as a "good guy" regarding PalmOS devices.

Needless to say, I fully agree that Sprint's decision to not even sell the refurbished Centro is indeed "the end of an era."

To review, here are the remaining ways to get your PalmOS on:

2) A Nokia device to run PalmOS in an emulated virtual environment.

3) A PalmOS legacy device, perhaps purchased from Craigslist, a friend, or just on the internet.

Does anybody know of any other paths to resume PalmOS-ing?

i love Sprint. but everyone blamed Sprint for the Pre debacle. but if you are trying to sell a turd, a turd is a turd regardless of which network it's on. and the inverse is also true - if you have a great product - the network doesn't matter - see iPhone. see EVO 4G.

Sprint has to do what's in their best interests. and that means focus on Android.