The NY Times David Pogue has written a very positive review of the wireless Handspring Treo. In addition to his other comments, he said something that Handspring probably isn't thrilled about. According to Mr. Pogue, the Treo will be released on Monday, January 14. Handspring itself has only said the Treo 180 and 180g would be available sometime this month but not given an exact day. It isn't unusual for reviewers to be told the release dates of products but they are asked not to reveal them if the company hasn't. 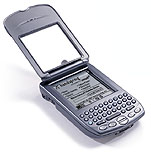 Mr. Pogue also confirmed that Handspring is working on a CDMA version of the Treo. The version to be released later this month is GSM, which is used less in the U.S. than CDMA.

The Treo 180 will have a built-in keyboard while the 180g will use Graffiti for text input. Both of these will have monochrome screens and cost $400 with a service contract.

Later this year, the company will release the Treo 270 with a color screen and a built-in keyboard. Handspring currently plans to charge $600 for it.

Thanks to Tomato75 for the tip. -Ed

Ed @ 1/4/2002 10:02:50 AM #
I've heard conflicting information about this. When Handspring originally announced the Treo line, it said the monochrome versions would be out in March and the color one three months later. When Handspring said in November that the monochrome Treos would be bumped up to January, they said the color one would still be released three months later, meaning sometime around April. However, David Pogue, who we know has as inside line to Handspring, just said "a $600 color- screen model is scheduled for release at midyear."

I finally got Cingular to release me from my contract and I got an ATT plan. The thing most people forget with GSM is you don't have the Analog radio for backup in remote areas.

Also remember, even if you have decent coverage in your home area if you travel for business like I do, the phone would be worthless in most places.

I would like to have a treo myself, but wouldn't even consider it until there is a CDMA color version.

Synwpn @ 1/4/2002 2:36:16 PM #
In response to GSM having poor coverage, a lot has to do with the phone you are using also. I have had Voicestream service for about 4 years now and havent had any problems. I have travelled a lot with it. Especially in the Bay area and haven't had any problems. I had a Nokia then, and it had much better reception then my friend's Motorola on Sprint service. And this includes going to Tahoe and down to Monterey and Carmel.

Plus now my phone works when I goto Asia and other places outside of the US, with the exception of Japan.

Damn, I actually thought it was coming out later

Treo? It will gain early sales among PDA enthusiasts, but will drop off. It's still priced too high. Once the price point drops down to $299, it may take off among mainstream consumers.

sford @ 1/4/2002 11:31:31 AM #
We had a Palm rep at our November Palm Users Group meeting who works with the licensees, and he had a Treo, an I300 (Samsung), and just about every other licensee product out there...plus one that isn't, yet. :) Anyway, the Treo is tiny. It was very nice. After using Graffiti for the past six years, the keyboard was a little awkward for navigating, though excellent for entering text.

Though monochrome is out for me, too, I eagerly anticipate the 270. (Basically, whichever color Palm smartphone that Verizon offers first will be the one I get.)

digichimp @ 1/6/2002 1:09:17 PM #
We had Palm over at the SF Palm User Group and the Acer s10 was brought out. Very nice little machine and it was in english yet! Unfortunately there is doubt that is will be released in the US. It was localized for the Chinese market. PalmInfoCenter had a story on it and I got excited because the OS would be spread to a large population. Unfortunately again, Acer became a PPC2002 licensee.
The treo was small but oh so comfortable and packed many features. I snapped a pic of it but it came out crappy. I'll post it when i get the report together.
With the i705, treo and others running OS 4 and below it will be interesting to see what all the hype of OS5 is all about. By Q4 and Q1 2003 we may see these next gen ARM Palms but I think the strength of Palm lies in the core functionality: batt life, UI, installed software base and not necessarily chasing features like PPC. hopefully one of the licensees may realize and capitalize on this and put out something like the Treo which maximizes functionality over features. you got to hand it to Hawkins and the Handspring team for fleshing out the next step in PDA evolution. They did it with the pilot and I think treo is on that path.
The sad suck thing is that it may sink like an anchor in this poor environment or misdirected marketing.
GSM should be pitched to Europe and Asia.
Get that CDMA working!

I was told by a Verizon rep that they will be introducing the Samsung SPH 1300 1st quarter of '02.

I just got one from Sprint...It's a good unit, I would not recommend it to be use in a vehicle a lot...You need to use the stylus (very dangerous) if you have more than 50 people in your address book. It's not a very intuitive product!

The color screen is bright, but I am very disappointed with the resolution, it's almost murky compared to my Palm IIIc (Still my favorite color Palm.)

I remember being in Turkey in a tiny isolated village where they had one dodgy phoneline leading in which was only good enough for a slow modem connection on dry days when it hadn't rained for a while... Of course everyone was on the beach with their GSM phones with cystal clear reception.

pstreck @ 1/4/2002 1:09:39 PM #
That would be nice, unfortunatly here in the States, ohio to be more precise. They estimate that it will be another year or two before we have gsm access

Coyote67 @ 1/4/2002 1:43:01 PM #
GSM is nice. I was on a cruise going around the greek islands, and people were using their cells on the top deck with the ship being out of land viewing distance. Was very impressed. But once you get down to manhattan, if I don't get a signal 24/7, in any location...its just not worth it.

Coyote67 @ 1/4/2002 8:51:33 PM #
Just because they say they cover the area, doesn't mean their coverage is good. Voicestream has coverage in NY, but lots of areas have horrible signals. Areas where said signals are horrible, cdma is great. Thats just from my experience, don't quote me on it.

Btw, the Kyocera is still the phone to beat for my money... your mileage may vary. :)

For complete battery tests and comparisons of various PDA's check my site at http://www.pocket-gizmos.com

I.M. Anonymous @ 1/4/2002 1:01:17 PM #
Exactly. It makes more sense for me to just pay $300 for two tiny items that can fit into two of my pockets just as well. I'll save my money until the day it becomes significantly cheaper, but I'm willing to bet that they'll just discontinue it before then, in which case you'll have to look for a used one.

I.M. Anonymous @ 1/4/2002 2:36:32 PM #
It seems unlikely to me that people who already own a PDA will pay $400 for a monochrome pda-phone. At that price, it's hard for PDA owners to justify paying for that much, especially since Handspring already offers a cheaper alternative, what with the VisorPhone module costing a mere $99 WITHOUT a service plan.

It'll be interesting to see how many CONSUMERS will actually consider buying the Treo 180 for their first PDA. Considering that Nokia and Motorola sell comparable 'converged' devices at the same price as the 270 is expected to sell at, Handspring is probably thinking that they'll be able to grab a big piece of that market of high-end cellphone users.

I don't think I'll be getting either versions ... my phone and my PDA do just fine for now. Although, I do know that my Dad, who's never had a PDA, is really excited about the Treo!

I've got a Nokia phone I bought a year & a half ago.

To replace the two with similar equipment would cost me at least as much, if not more, than either a Kyocera Phone or a Treo.

But that's my perspective.

donpdonp @ 1/4/2002 6:41:29 PM #
From what I can tell, the Treo is GSM and a GSM modem. that is such a let down. My experience with GSM modems is that you still have to dial the phone and you still have to have an ISP dialup account. This new product is using a very old technology (gsm modem) to get data.

GPRS is what it should be using. Its always on. Its about 56kbits/sec. The treo wont realize a fifth of its potential without GPRS.

The best solution right now, in my opinion, is a $200 M125 with Bluetooth SD I/O card (oh when will that be sold in the US?!) and the $250 (from ebay) Ericsson t39. Voicestream in Portland, OR has GPRS today and Id love to surf the web from my palm using the phone that is still in my pocket.

Ed @ 1/5/2002 8:34:44 AM #
The last I heard was that Handspring plans to have the GPRS software upgrade ready during the second quarter of this year, which is when they expect GPRS to begin to be widely available.

I.M. Anonymous @ 1/7/2002 2:19:18 PM #
"Q. Will you support EMS?
A. We are working with third parties to support EMS,
Other
Q. Will your product be upgradeable to GPRS?
A. Yes. When the GPRS networks are commercially available and carriers are offering GPRS service plans, Treo communicators will be upgradeable via a software patch from Handspring. "

carriers are offering gprs service in europe - and they are commercially available - so lets see the patch - i dont belive it - until somebody has tested it - or is it going to be when the color is out ?