Canesta has begun to take the wraps off of its electronic perception technology. One of the first applications that made possible is a projected virtual keyboard that can be integrated into mobile devices such as PDA's and smartphones. The comany expects products to incorporate the virtual keyboard chipset by next year. 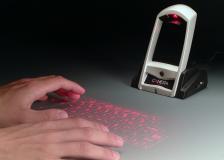 The chipset, when integrated into cell phones, PDAs or other mobile devices, enables such devices to project the image of a keyboard on a nearby flat surface, and then read the finger movements of a user who types on that image, as if it were a physical, full-sized keyboard. Canestas electronic perception technology resolves the users finger movements in real time into keystrokes electronically provided to the device.

According to details on News.com, the chipset consists of three basic parts: a light source that beams a blanket of infrared energy onto a surface, a sensor that tracks finger movements, and a pattern projector that displays an image of a QWERTY keyboard in red. The sensor, the key part of the equation, pinpoints where the light is reflected. It then transmits data about where reflective surfaces (the back of your fingers) move and stop. The processor then translates this into keystrokes.

Canesta is demonstrating the technology at the SIGGRAPH 2003 Conference In San Diego, CA. Two other companies, VKB and Virtual Devices are also working on similar technology.

Thanks to Steve B. for the tip.

RE: imagine the possibilities

I can just see this thing getting kinky

RE: I can just see this thing getting kinky

neat, but i'll wait for the bluetooth

adamrichman @ 7/31/2003 1:25:56 PM #
I can see this sort of thing take off but be a little too impractical. I mean it's a great idea but a lot of time you can find yourself in a situation with uneven surfaces and that sort of thing, plus, unless they supply something like it looks they will in the picture, you'll have to look for something to stand up your PDA to read it. I think i'll wait it out for the Bluetooth solution that's been talked about. The flexible, wireless one from xxx company, I can't remember the company/website but if anyone else does... Anyone else with me?

I'm surprised one hasn't appeared yet. Interface directly w/phones too if you're a big SMS user.

cbowers @ 7/31/2003 7:09:59 PM #
A Korean company, Daelim even did a clip on Bluetooth adaptor for the Stowaway keyboard (PPK a variant of). I only saw it demonstrated on a PocketPC version of the keyboard however.

dustbunny44 @ 7/31/2003 7:22:12 PM #
Thanks for the links.
I was thinking of BT in the folding Palm-rebranded keyboards (hey, no one is ever satisfied on these forums!). I like the folded form-factor (the thin or thick one) and the key action, and would like dragging it around without a Palm balanced on its middle.

Which has now got me thinking about the utility of a BT module that fits onto a Universal Connector - the accessory side, emulating a PDA to the accessory. Hmmm...

mikemusick @ 7/31/2003 1:36:31 PM #
This has all the earmarks as being the kind of technology that tends to work sort of OK in the lab and in controlled demos, but falls to pieces in the field.

I wish them luck, but if it were my money invested I'd have them as a short.

Anyway it's gonna be awkward to type into nothing at all. No tactile feedback?

Altema @ 7/31/2003 5:33:14 PM #
Of course, you kiss battery life goodbye with the current OS5 PPK driver. It must leave the serial port open or something to make that much of a difference. With the driver installed and enabled on a T|T, expect a 5% to 10% reduction in battery life. The OS4 driver had no such problem and could be left enabled all the time.

Don't sell it short yet.

acaltabiano @ 7/31/2003 5:13:51 PM #
I have been waiting for this to hit the market since last year, when I saw the tech review in Poular Science. I have found a few co.'s online that are offering some variation on this tech, and almost all of them are hopeful it will make it as an integration to Mobile Phones or PDA's. While for some it might not make sense, for others, imagine carrying just your PDA, and still having the capability to type away on a full-sized keyboard!
Right now I am more than happy with my Stowaway, but when it becomes integrated, I'll more than consider it...

sr @ 7/31/2003 9:20:20 PM #
Stowaway is great as I can touch-type and enter data quickly. I honestly think that with this virtual keyboard I would be slower than with Graffitti simply due to the lack of tactile feedback and having to constantly look at the keyboard and the screen to ensure you're hitting the right keys, er, I mean zones.

sford @ 8/1/2003 12:05:43 PM #
I agree. I love the idea of having a "built-in" full-size keyboard, but touch is how I'm able to type so fast. Constantly looking back and forth would prob'ly just frustrate me. I'll prob'ly be sticking with the Stowaway.

Will it work under the sunlight?

A Palm in one hand is worth 2 Pocket PC Bricks
: )
-Steve

The basis of touch-typing is that one feels the keys.

If you feel like you're under control, you're just not going fast enough.

A solution looking for a problem

RhinoSteve @ 8/1/2003 7:49:19 AM #
This is definately in the "too cool" category but frankly, as a PDA add on, this is only going to end up on Pocket PC devices that are desperately trying to gain market share. (Read, "coming to an iPaq brick near you")

The technology OEM will get some of their research money back, a PPC house will get a month or so of press, there will be a bump in sales, a watershed of returns and then all will be forgotten six months later.

The genertic term for this stuff is "Optical Semantic Tracking" and has been a Media Lab plaything since the 80s. While the knee jerk reaction is to put this in a space where you can't put in a full keyboard, this will be more successful as a keyboard enhacer and not a replacement.

I see something like this being successful in user interface enviroments where desktop PCs and laptops would benefit avoiding having keys silkscreened. Using this scanner in s laptop allows the elemination of silkscreened keys, the electronics in the keyboard. Most of all, the projected key labels can now change via the software application. That is a termendious enhancement in keyboards!

And to the product manager at Canesta who is reading this, be happy I'm not billing you for this advise.