Jeff Hawkins gave an interview this morning on National Public Radio. A clip of his appearance is now online. In the interview, Jeff talks about his current work at his new company Numenta, his theory on how the brain works and potential commercial applications for his new pattern recognition and machine learning technology.

The Hawkins interview is available to listen to at NPR via a RealAudio stream. 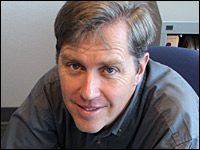 The interview runs for a little over 15 minutes. He mostly talks about his thoughts on human and computer intelligence and the challenges of how to get computers to think more like humans. He details that his company Numenta is building a more intelligent optical vision and patern recognition computer technology platform. He calls it a "major advance in technology" and discloses that he has already built a small scale prototype.

He goes on to mention some possible practical applications for this technology. One example he states is searching through your digital photo library for a specific person and he says that auto manufacturers have been interested in sensors for cars that can visually recognize the alertness state or condition of the driver.

The company was formed based on theories from his book On Intelligence.

"My goal at Numenta is to put my brain theory into practice," said Hawkins. "We have the opportunity to build intelligent memory systems to solve difficult problems in computer science and artificial intelligence for which no other known solutions exist, such as general machine vision, language understanding, and robotics."

Donna Dubinsky, who was formerly co-founder and CEO of Handspring, as well as CEO of Palm Computing, is Numenta's CEO. "I'm delighted to be working with Jeff again to formulate a business out of his theories," said Dubinsky in the announcement press release. "The Numenta vision is large in scope and long term. Although it may take several years before we have commercial products, the possibilities for this technology are exciting and broad."

Note to Donna and Jeff:

Dear Donna Dubinsky and Jeff Hawkins, this is the Palm OS community, please get back to work at Palm :-) We need you guys. Palm and Ed Colligan has lost their touch. :-(
Yours truly,
Jeff Frady - Legodude522

Ed Colligan referring to the annoucement of Windows CE: "Fortunatly, the products sucked beyond our wildest dreams."
-Piloting Palm, pg 169

Hawkins has no interest in saving Palm and couldn't even if he tried. The company signed its epitaph when the corporate shell game they played with PalmSource blew up in their faces. Hawkins is now content to keep cashing in on his (brilliant) ideas - as well he should. He will likeky be completely cashed out of Palm shares within 2 years. Not many people get struck by lightning in their lifetime. Hawkins was hit TWICE (Pilot + Treo 600) but don't expect it to happen a third time.

The former Be engineers were left alone too long with no one to watch over them during the Cobalt Years, resulting in a near-useless (and LATE) OS. Palm treated PalmSource like a parent dealing with a kid who had brought home a bad report card, and should have brought the OS back into Palm as planned, but Access and Motorola dashed their plans.

If NOTHING else, Hawkins could at least have tried to help bail water out of the sinking ship by watchdogging Palm's disasterous levels of (non) quality control over the past 2-3 years & either euthanizing or doubling the RAM on the LifeDrive before it actually got to market in its current form.

As for Cobalt: Instead of "near-uselss", how about "completely useless"? If it doesn't arrive on a shipping device EVER and is never used by anyone other than a select few developers & insider testers then what good is an OS (regardless of HOW late it ships)?

On a related note, what was the concensus around here for Hawkins' next big "thing" he hinted at last year? Was it really the LifeDrive he vaguely mentioned in the article or was it something else entirely? I cannot FATHOM Hawkins, even with a head full of acid, conceiving anything as cludgy and crash-prone as the LifeDrive and equating it to a "revolutionary device". Either that or he really DID hand Palm a grandiose, visionary concept of a converged "life storage device" only to have Palm's beancounters castrate it into the DudDrive we are all too familar with.

"Hawkins' next big "thing" he hinted at last year"

-Dunno. Just hope it wasn't a Cylon prototype. Yea, yea, yea. I'm as much of a geek as you. But just think about it.

I thought this was a pretty excellent interview, though he doesn't really talk much about palm. a lot of potential with these ideas.

I can see it now - Navigation, Data Input/Output via Brainwaves.

We'll get there someday, but maybe not in our lifetimes.

RE: Treo and Brain Linked Wirelessly

Listening to the NPR interview, and then reading the editors blurb for "On Intelligence" on Amazon made me feel like it was the 60s all over again.

Someone should suggest to Jeff that he do a google search on "image recognition" before he makes more outrageous remarks about what computers can and can't do in that field.

May You Live in Interesting Times

I suggest you RTFB first before you make such an outrageous remark.

> Someone should suggest to Jeff that he do a google search on
> "image recognition" before he makes more outrageous remarks about
> what computers can and can't do in that field.

Ain't that the truth!

I visited his web site(s) and didn't see ANY references to, for example, Genetic Algorithms though the sites are both coated with words about learning, etc. Sent an email asking "Say what!?" but, of course, neither expected nor got a reply.

Looks like he's a neural net kinda guy, I guess!

I know i sound extremely geeky when i say this but...

What is wrong with people!? They, themselves, predict what would happen if computers became "intelligent", and then they try even harder to see if they are correct. If anything is a bit messed up, that is.

I second the "I hope it isnt a psylon" comment.

I suggest you RTFB first before you make such an outrageous remark.

My remark isn't outrageous. Hawkins claim that his system's capability to sometimes recognize the difference between very different line drawing and no other computer system can do that is. Image recognition has gotten pretty sophisticated.

Best part of the interview: When the interviewer had to correct Hawkins misunderstanding of what was being searched for by a google image search.

But as far at TFB: Hawkins is going down the same dead end that the AI community he despises so much went down in the 50s, and he's going to end up in the same cul-de-sac.

What was that phrase about forgetting and repeating, again?

May You Live in Interesting Times

For further info on his thoughts on intelligence check out this lecture video that is online from MIT: