The FCC has taken the wraps off a new upcoming Palm Powered Smartphone from Samsung. The SPH-i550 is a CDMA flip phone with a high resolution screen, SD slot and a megapixel digital camera. 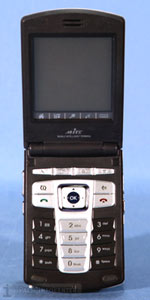 Samsung SPH-i550
The FCC has approved the Samsung SPH-i550 is a Palm OS 5.2 smartphone which has a a high resolution screen and exterior OLED color display. The phone portion is a Tri-Mode Dual Band Analog/PCS phone. It would likely be targeted for use on the US Sprint network.

The phone has a built in megapixel digital camera with a flash, an SD memory expansion slow, voice recorder and comes with a web browser and messaging software. It will also have a mp3 player and video playback with dedicated control buttons on the exterior. It comes with a user replaceable 1150mAh standard battery, and a optional 1700mAh extended battery accessory will be available.

There is no word on general availability or a price at this time. Samsung also has shown a series of other CDMA and GSM Palm OS smartphone models that have not yet been officially released.

blacklinefish @ 4/15/2004 7:28:37 PM #
I don't spend much time reading PDF files on the FCC site... but what is with the "Test Setup Photos" in the link above that shows weird photos outside, with blocks of blue foam, and what appears to be a hunting blind in the background. Is this normal?

Comments on this phone seem to go back nearly a year, so I guess we shouldn't hold our breath on an imminent release.
--gh

MountainLogic @ 4/16/2004 1:55:53 PM #
That would be where the poor junior engineer who got stuck sitting in the rain during the test has to monitor the test equipment. Because this device broadcast RF and communicates with remote devices they end up testing in an "open field" configuration.

I know that the FCC has been outsourcing tests for years, but I'm very that they still do them in MD, esp so close to D.C. The DC-Baltimore corridor megopolis must be an RF engineer's worst nightmare -esp inthe PCS bands.

I know that we do RF-related tests in a isolated box canyon in Arizona - and we are thinking of moving somewhere else, because the nearest town (10 miles away) is growing too big.

grimpeur @ 4/15/2004 7:28:27 PM #
Anyone here a fan of '24', if you are then you'll realise cellphones play an important part in the show, as does product placement. Last season Nokia phones were ubiquitous however this time Samsung have paid the money to get some airtime for their products.

Anyway, I digress. Tonight episode 10 was being shown in the UK and I couldn't help but notice that an i500 or i550 phone was used in CTU by one of the characters. They actually look bigger that I was expecting.

So, who's going to be the first with a screen grab?

What is a SD memory expansion slow?

Serving Christ thru serving others,

To my mind, this new model suffers from feature creep: MP3 player buttons on the outside, megapixel camera. What next, built-in shoe-buff? Cup-holder? Like the cartoon said, "Do you have anything more modern and useless?"

I find it very frustrating waiting over a year for Samsung to release a Palm 5 smartphone, only to see the products constantly superceded, but still unreleased!! I should stop reading news here, but I CAN'T HELP IT.

It is real this time??

If only there were a hi-res Treo. Possibly with bluetooth.

One phone to rule them all, losing batman's utility belt!

Samsung is the closest to release a product I have been looking and waiting for now for over a year.

If you look at that list Samsung has a variety of phones with 7 of the 9, a different 7 across so many phones. Phones we've seen, talked about, have had at various tech shows, but have yet to have delivered. Fortunatley or unfortunately ... I am just sure that now that they've worked us up they'll release some of the "not quite right" combinations and then later release "the one cell phone" to rule them all. I've never been a patient one so I end up being an upset one ...

The i505 we've seen and had shown here is the closest, wish it had hi-res screen and wi-fi though! Samsung ... do it right the first time and you can take the market easily. Give the full featured phone, don't cut us short!

I've been making do with the Samsung SPH-i300 for years now. The input area got scratched (d'oh! shoulda bought a screen protector film) so my next smartphone has to be a clamshell (plus I doubt I could get used to the Treo 600's micro-buttons). The SPH-i500 seemed an improvement but not enough to pay for (no expandability, no camera, no 2nd display). This one seems really promising.

Can anyone comment on doing Graffiti 2 on a clamshell, e.g. the SPH-i500? I've tried it on a Clie and didn't like it: you either hold the bottom half and flex the hinge or hold the top half and the bottom gets in the way.

I read on pdaphonehome.com forums that a SDIO Bluetooth card in the SD slot may not work well with Bluetooth headphones. Plus, if you put in a monster memory card for music, presumably you can't use a Bluetooth or SDIO card.

Now I just wait around for 8 months for Sprint to finally release the phone, and of course in 3 months Samsung will show at trade shows an even better phone that makes this obsolete :-(