Samsung Launching i539 Smartphone in China 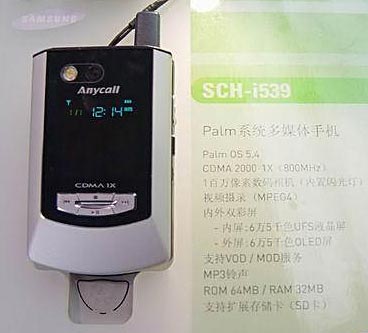 This smartphone is similar to the US version SPH-i550 which has been long delayed/cancelled by Sprint/Samsung. The demand for the US version is high as many Sprint users has been looking forward to this model. Especially people looking for a Palm OS Garnet smartphone with a clamshell form factor. An online petition has even been created for the release of the SPH-i550 in the US.

Thanks to wincat, Jonatan and Rich for the tip.

I suppose when the icons that are phone-specific are factored out, that's a 320x320 screen?

Yes, Samsung's past models have typically used the extra space for phone specific info such as the signal strength and voicemail notification etc. So it's a 320x320 with some extra space.

Great News!!! Samsung and the Palm OS again at last!

Wow! Samsung and the Palm OS in the Chinese market! That is great news. I sure hope we see some big sales. I hope Samsung makes a killing being the only smartphone in the market.

If Samsung can get some early adopter Chinese successfully hooked on the Palm OS, PSRC might just make it with the feature phone strategy in the biggest cell phone market yet. Over course that is overstretching todays annoucement but it is definitly hope.

Now all I want is a Samsung Lifedrive Palm 4 GB THOR phone in the USA. That would be even better.

RE: Great News!!! Samsung and the Palm OS again at last!

As for Samsung, it's not only Palm OS that's been cursed with vapourware. I'm also starting to become a regular at allaboutsymbian.com and Samsung has promised no less than 3 different Symbian smartphones, all of which have failed to materialise.

The thing that really bugs me is that the SGH-i530 was released in very small numbers to guests of Athens Olympics Comittee. a couple of which have been doing the rounds on eBay for some £350 ($650). This is a crime as the phones themselves look pretty damn good. (sigh)

Sprint should burn in Hell for killing off the SPH-i550.

Why does GSM get all the good phones? Almost makes me want to switch to GSM and buy a damn SGH-i530 off eBay...

VoR - even GSM didn't get the SGH-i530, except in very, very limited numbers. Here's a snide short story I put up about Samsung on allaboutsymbian:

Once upon a time, there was a mobile phone manufacturer. And everyone was very happy with the phones he made, becuase they were very stylish and looked cool. Then the mobile phone manufacturer looked at PDAs and jealousy set in, because they were so much cooler and could do more than a standard phone ever could. So the manufacturer went to each of the big OS companies (Symbian, Palm & Windows) and was allowed to start making smartphones. Then things took a turn for the worse. Other manufacturers started copying his designs and so paranoia set in, meaning that no sooner had he developed a phone, he had to abandon it in case someone was working along similar lines, which would cost him his unique style. The first casulty was the SGH-i530 - a Palm smartphone which looked the nuts but never got released. The D700, D710 & 720 Symbian phones soon followed. In the end, all the manufacturer had was a Windows smartphone which was the same piece of **** all his rivals produced.

Is this story going to have happy ending - I doubt it.

RE: Sprint should burn in Hell for killing off the SPH-i550.

I called Sprint last week and no one I spoke to had ever heard of the SPH-i550 (no surprise there) but even if I somehow "accidentally" come up with one, they say I wouldn't be able to use it on their network since they wouldn't recognize the ESN. GSM with its SIM cards is looking more and more attractive every day...

For now I'll stick with my T608 and gloat over having a rare (but buggy as he11) Bluetooth phone that actually works on Sprint. It shouldn't have to be this way, but I've hoarded a few T608 away, just in case Sprint NEVER brings out another decent Bluetooth phone.

Is there one-hand navigation?

Will this smartphone offer similar one-hand navigation like the Treo devices?

I hope Samsung thinks about bringing a Palm OS Clam to the US Market. That's all. The Palm OS community is in dire need of culture like this.

Sprint ALREADY turned down the phone even though it already has FCC approval. There's a petition now trying to get them to release it.

If you're disappointed that Sprint cancelled the SPH-i550 you can let them know by signing this petition:

Because there is a control bar in the bottom.