Tapwave after seeing strong interest from distributors, customers and the game development community (over 40% of Tapwave's 3000 developers hail from Europe) has led the company to expand into Europe. Starting this holiday season, customers in the UK will be able to purchase and experience the Tapwave Zodiac handheld.

To accelerate expansion, Tapwave is now establishing a legal entity and local presence in the UK and recently hired Andrzej Kasprzyk as the company's Director of European Sales and Roy Parker as Director of International Operations. The company has also retained the services of UK-based PR and Marketing group Barrington Harvey, Herts and will help promote the Zodiac throughout Europe. Tapwave will also start participating in appropriate European events. This week they secured space at EGN (Waterfront Room, Room 17) and ECTS (Exhibit Area, Room 4318). Later in September, Tapwave will be a premiere sponsor of the PalmSource European Developer Conference in Munich. 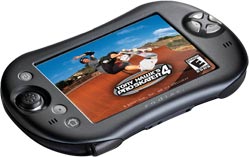 "Right out of the gate, European interest in the Zodiac has been strong, from consumers and media to distributors and developers," said Byron Connell, co-founder of Tapwave. "The company is now ready to unveil our multimedia console in other markets, starting in the UK and then expanding from there. We are looking forward to starting a relationship with consumers and distributors worldwide."

Beyond being able to purchase the Tapwave Zodiac, consumers will also be able to pick up the latest Zodiac accessories and popular Zodiac game cards, such as id Software's DOOM II, 3D Realms/MachineWorks Northwest's Duke Nukem Mobile, Activision's Tony Hawk's Pro Skater 4 and Midway's SpyHunter. Along with premiere titles, Tapwave is also offering two game packs -- Z:Pak: Adventure, which will include Galactic Realms and Legacy; and the Z:Pak: Fun featuring Paintball, MegaBowling and Kickoo's Breakout. Some of the other Zodiac premiere titles for this year will also include Activision's MTX: Mototrax and Street Hoops, Eidos' Tomb Raider and Atari's Neverwinter Nights. Zodiac accessories available at retail will include the Zodiac Sport Case, Zodiac Cradle, a Zodiac Stylus 3-pack and the Zodiac Deluxe Leather Case.

Judging from the prevalence of exclamation marks, I think he's happy. I guess there must be folk here in Europe eager to play with a Zodiac, and six months ago I might have been one, too.

It's potentially a nice machine with a tablet screen, the biggest memory, dual slots, bluetooth and good battery life, if they've worked the bugs out of it; but I think they're going to have to target the gameplayers in Europe rather than the PDA geeks, 'cos we're all waiting for something newer.

Well, actually, the United Kingdom still uses pounds, not Euros. Also, you seem to have difficulties distinguishing "mein" and "dein" ;-)

But by the time it is released over here, I will be able to buy a Palm Tungsten T5 with a 320x480 screen, running OS6.

Wolfgard @ 9/2/2004 4:59:19 PM #
If it ever comes to Asia, I really wouldn't mind selling off my zire 72 and get the Zodiac. Honestly, I'd rather get the zodiac than the T5. PalmOne's PDA quality has dropped like a rock lately. T3 digitizer issues, T|E construction problems, Zire 72's peeling paint, that pretty much discouraged me from buying any other palmOne device. From what I heard, the Zodiac is one sturdy device:)

But by the time it is released over here, I will be able to buy a Palm Tungsten T5 with a 320x480 screen, running OS6.

one flaw in that logic. there is no OS6 device planned right now.

High John @ 9/3/2004 8:30:17 AM #
Aaron - although admittedly the actual T5 is merely speculation, surely you agree that OS6 devices are currently being developed and will be available before the end of the year?

JonathanChoo @ 9/3/2004 11:04:43 AM #
For the Zodiac to be taken seriously as a portable console, the OS must be consistent. That is why I seriously doubt that OS6 would ever come to Zodiac as it might interfere with some of the games currently on sale.

Consoles also always use the same processor speed so I doubt the next generation of Zodiacs would ever use a different more powerful processor.

The tapwave is that resolution, so having that screen size isn't an argument and don't forgot the tapwave, it has a video card in it (8MB) and they say 200Mhz but when its actually tested it has a speed 297Mhz

skeezix @ 9/3/2004 11:59:20 AM #
Naturally of course, only the Zodiac has a set of controls useful for gaming. As every PDA owners, games essentially suck to play unless they're touchscreen based... except on the Zodiac :)

Wolfgard @ 9/3/2004 1:28:46 PM #
I wonder if it'll come to South East Asia. There's a very strong demand here for mobile games. In fact, the NGAGE is selling pretty well here. If the zodiac is available, I seriously think people would prefer the zodiac to the NGAGE.

Hal2000 @ 9/3/2004 9:36:27 PM #
Yes, it runs @297 mhz, and it is fast enough for anything that I throw at it. Why wait for a (T5?) Sorry but you just don't know.
Specs are not everything. Build quality feels like a solid piece of aluminum, and there are NO bugs. 2 slots, 128 internal, great screen, and thin. Bluetooth for the longest web experience,and batteries to match. You will end up doing everything in landscape.(check the T3's poor performance #'s in landscape mode)
I manage a 200 million dollar construction project on Broadway.It is Jostled 11hrs a day, from ANY temp. extreme, And has been set in front of billionaires(my bosses) My point is you can have this now,
so just get it and be blown away, palmone users.

I will be VERY suprised if it approaches the Zodiac.

P1 just doesn't have it in 'em do do more than incremental development. Plain and simple.

ardiri @ 9/3/2004 4:36:45 AM #
you have already been able to purchase the zodiac console in the UK - there was a HUGE demand for this (hell, even zodiacgamer.com is UK based) :P you can order zodiacs NOW from the following site:

basically, they buy em - then, ship em out to you individually :) consider them middlemen - so far, i haven't seen anyone complain about this service.

as for actually buying software? the zodiac store is still, in the best of my knowledge locked to using USA based credit cards only - so, you should also request to developers to provide a non tapwave optimized version for use on the zodiac.

we did this with pocket mini golf - you can order the tapwave optimized version; or, buy a standard OS5 version that can be used on your tapwave (still at 480x320). we managed to pick up a lot more tapwave sales that way (mainly UK, europe).

it is nice to see some official plans to release in europe - but, it shouldn't be restricted to the UK. the german market is specifically much larger than the UK market when it comes to handhelds; it needs to be euro based :)

The true north, strong and free...

My HandEra 330 is not going to last much longer.

tompi @ 9/5/2004 4:09:47 AM #
I was faced with buying a new Palm recently. The Tapwave hardware looks and feels great, but I still ended up buying a Zire 72. Why? All the non-Palm PalmOS devices I have owned (quite a few) have had significant problems with compatibility, and I expect the Tapwave to be the same. Its non-standard screen layout (landscape default), non-standard launcher, and non-standard buttons alone spell trouble.

A little research would tell you if your expectations are justified.

As for zodiac incompatability, I'm no expert, but the only one I've heard of is with MMPlayer, and even that is being worked out. If you're uncomfortable with the launcher, install zlauncher and customize to your hearts content.

Yes, and Sony is a good illustration of how incompatible third party PalmOS devices are. For example, the Clies had their own, incompatible audio and HiRes+ APIs. They have their own WiFi and Bluetooth management (less functional and less reliable than Palm's). They had their own desktop app, which is based on, but different from, Palm's. The way they used flash memory differed. Sony, of course, isn't shipping Palm-based devices anymore at all.

My recommendation: if you are going to buy a Palm, buy it from PalmOne--you'll save yourself a lot of trouble.