Earlier this morning, as last months rumors suggested, Sprint finally took the wraps off the CDMA version of the Treo Pro. The Sprint Version of the Pro made a brief appearance and was fully order-able on Sprint.com, only to be pulled a short while later. The device still appears to have been scrubbed from the site as of this writing, so we can only assume that an official announcement is likely forthcoming in the near future. TreoCentral is also covering the leak and is reporting the device will hit Sprint retail stores this Sunday, January 25th.

The CDMA Treo Pro's specifications are slightly boosted from its older GSM sibling, as we reported the other day. Its Qualcomm MSM-7501a CPU's clock speed has indeed been confirmed as being boosted to 528mhz, a nice jump from the 400mhz GSM version. 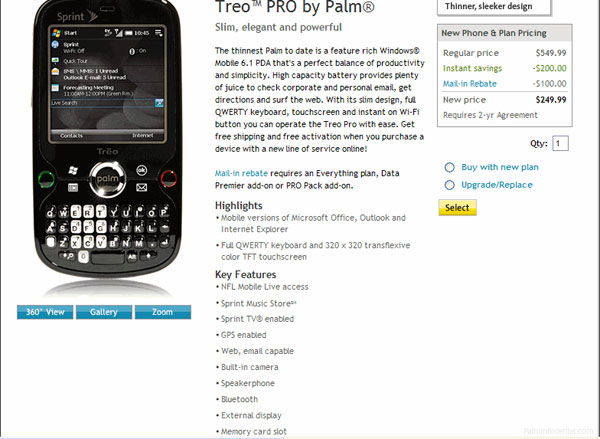 Unfortunately, however, the device's RAM specifications are still up in the air, although TreoCentral is reporting that it has 96mb of RAM and 512mb of ROM. In short, the device is improved by having its space available for program storage doubled to approximately 336mb but this apparently comes at the expense of a reduction in usable RAM, with only ~42mb available after a soft reset, as indicated by the Treo Pro's manual (.pdf link). Battery capacity is fortunately unchanged and remains at a reasonable 1500mAh.

The current Sprint-exclusive version of the CDMA Treo Pro is also noteworthy for being the first carrier-endorsed and subsided version of the handset in the United States. The carrier-subsidized pricing also should be far more palatable to the average buyer, though still a bit on the high side at $349.99 with a 2-year contract before a $100 main-in rebate applicable only to some calling plans brings the price down to an effective $249.99. The CDMA Pro's full retail price rings in at $549.99, identical to the full retail pricing on the unlocked Treo Pro and comparable to the pricing of older contract-free CDMA Treos.

The excuse for pulling the Treo Pro off Sprint

Sprint is saying two things - "We put it up accidentally" and, more importantly, "The Treo Pro hasn't passed our testing yet".

If there is something significantly incorrect about this apparently-new Treo Pro model (besides simply a CDMA rather than GSM radio set), sufficiently incorrect that Palm internally predicted it would be delayed into March, say, this could explain that extra $100 million from Elevation Partners as well as a complete cancellation would.

Some of us are scratching our heads about that extra $100 million because, practically hours before it was announced, Clligan/Brown had said Palm had plenty of cash and didn't need new cash.

RE: The excuse for pulling the Treo Pro off Sprint

So are you not-so-subtly suggesting that the Pro has possibly been cancelled outright, perhaps due to Sprint having too many unsold 800w's left hanging around and the Pre possibly arriving sooner rather than later (some are saying it'll be here in February-ish)?

Honestly, a few months ago I would have sorta expected the CDMA Pro to end up on Verizon (replacing the ancient 700wx) since Sprint still had the "sorta new" 800w.

In hindsight, the 800w should never have existed and the Treo Pro should have come out 4-6 months ago with a simultaneous GSM & CDMA launch.

RE: The excuse for pulling the Treo Pro off Sprint

No, I'm not predicting that the Pro is cancelled (though that could have been a possibility awhile back!) - I'm suggesting the possibility that the Pro is delayed and thus the revenue from the Sell-In of that device won't make it to Palm in a timely manner. So they ended up unexpectedly needing another cash infusion even though they had JUST said (in the earnings call):

==========
On the cash question, we have $224 million in cash. We have taken actions to manage our expenses and to preserve as much cash as we can. We are going to manage that as carefully as possible. We really need to watch that carefully. We recognize that cash is king right now in this environment. But we are also very confident - if we needed to, we could raise additional cash if we needed to but that would be to enable us to even further drive the business and this launch and other efforts that we have going forward.

So I think on the cash front, we have a nice stable and we feel like if we needed to augment that, we could do that and we are confident we can do that.
==========

Can Windows Mobile Get the Magic Back?

"Automagicly" is a word that Andrew Lees seems to use a great deal more than most people.

Mr. Lees, the senior vice president in charge of Microsoft's cellphone software, stopped by recently to drop hints about what will be in the next generation of Windows Mobile that will be unveiled at the Mobile World Congress in Barcelona next month.

Magic? What magic? And why are you pimping this rotten OS, Gekko? You never used it!

i'm platform agnostic, Con. i use the best product for my needs at the best price.

"I don't think anyone is going to make money on synchronizing data," he said. "It is simply what people will come to expect."

And you've been with PALM all this time, Gekko, never having bought a WinMob device. Hey, did you forget I HAD a Pocket PC at least? Damn, that 4" GENIO screen was nice. Too bad Toshiba put an auto-destruct in the damned thing, apparently.

Oh, and since we're discussing other platforms, let me pimp:

Where, Oh where is my 480x800 ALP device with its stylus, SD slot, and desktop Hotsync? Damnit, I want to have one foot in the past and one foot in the future...and nothing in the cloud for the time being. Cobalt or ALP

Did you see the next post? It makes Gekko wish for Cobalt 6.1! ROTF...