Rumor: While the WebOS-powered Pre may be Palm's most anticipated upcoming smartphone offering, a CDMA version of the Treo Pro for Sprint appears to be the next Palm device that will actually arrive on store shelves. So while many have been expecting the long-anticipated CDMA version the Treo Pro to merely substitute the GSM radio for a CDMA one, details are starting to emerge that the CDMA Pro arriving on Sprint will see a noticeable boost in several key areas.

According to this WMExperts report as well as this TreoCentral article, some leaked Sprint internal training slides are now suggesting that the Sprint Treo Pro has received a few news-worthy hardware and software changes. First off, the Sprint Pro's CPU has reportedly received a nice boost to 528 MHz, a substantial increase over the previous 400 MHz. While the GSM Treo Pro has the highest-clocked CPU in a Palm smartphone to date, some users have reported that it does not feel as snappy in day-to-day usage as its older, Treo 800w brethren clocked at 333 MHz.

In addition, the CDMA Pro's exact memory specifications are still up in the air. According to the slides posted by WMExperts, the CDMA Pro's memory capacity has been slashed to the unlikely figures of 32mb program memory and 512mb storage. If accurate, this decrease in program memory would put the Treo Pro on par with the three year-old Treo 700w, a device greatly maligned for its skimpy memory specifications.

However an older, more plausible rumor suggests its memory capacity will mirror the Pro's GSM stable mate, with 128mb program memory and 175mb of user storage available. Another rumor suggests that the program memory has been boosted to a sizable 512mb with 300mb of space available for user storage. Based on the Pro's status as Palm's current flagship device, I would imagine that the CDMA Pro's RAM allocation would at worst be equal to the GSM Pro's and at best may even see a pleasant bump in capacity. 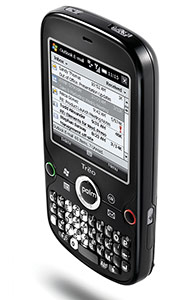 Sprint's own Java solution, Titan, is included in ROM vs. the standard Windows Mobile JVM, and Kinoma Play's free media payer app is bundled in the device's ROM. And while this comes as no surprise to GSM Treo Pro users, critics of the Treo 800w's hobbled GPS functionality will be glad to hear that the CDMA Pro's A-GPS is "Assisted and Autonomous", meaning the device does not require to be in an area of Sprint coverage in order to perform navigation duties.

So it now appears that the long-standing rumor concerning an upcoming CDMA version of the Windows Mobile 6.1-powered Treo Pro truly appears to be nearing reality, especially given the fact that it recently passed the FCC certification process. With AT&T apparently declining to carry the Treo Pro in any official capacity, Sprint's Treo Pro will be the first carrier-endorsed version of this device in the US market. In addition, the Pro's availability in Sprint retail stores nationwide will ensure that many customers will finally have the opportunity to demo the Pro firsthand.

When you compare a OMAP cpu to a Qualcomm cpu of course the 800w is snappier. If you've even kept up with http://htcclassaction.org, Qualcomm cpus are famous for being sluggish and over-delivered.

Did you know the MSM72xx cpu in the Treo Pro should be able to do 3D using AMD/ATI's famous Imageon processor? I bet Palm has no drivers for it as much as everybody else has experienced.

The Treo Pro is definitely a one-off in Palm's line of decent cpus. At least the Palm Pre went with the OMAP3 to continue good cpu performance instead of the driver-less Qualcomm.

RE: 800w has more powerful cpu

That's http://htcclassaction.org/ . Or even, just check out the Touch Pro Performance forum on XDA: http://forum.xda-developers.com/showthread.php?t=449391