Celio Corp, the company behind the Redfly mobile companion, today unveiled two new models: the Redfly C7 and C8N. The Redfly is billed as a smartphone terminal that utilizes your Windows Mobile smartphone over USB or Bluetooth to give you a larger keyboard and display.

The Redfly C7 is a more affordable model with a power-saving 7-inch display, lighter five-hour battery, and weighs in at just under 1.5 lbs. It will be sold for $229. The Redfly C8N is billed as the next generation design and features a 8-inch screen and a new media port that can link up with the iPod and digital audio/video players. It will retail for $299. 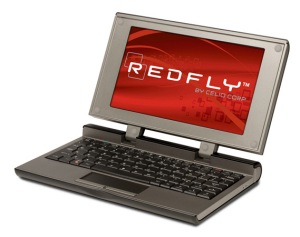 "REDFLY has taken off in the smartphone market and these new models are designed to extend this success," said Kirt Bailey, CEO of Celio Corp. "The REDFLY's larger keyboard and screen brings the right functionality to the smartphone, making it the netbook of choice without the additional TCO (total cost of ownership) and data loss risk of a UMPC or laptop. Combined with the REDFLY device, the smartphone has become the center of mobile virtualization and mobile cloud-based computing."

The Redfly C8N evolved from the original REDFLY design to meet customer demand to use the larger screen as an external display for media players such as an iPod, iPhone, Zune, or digital camera. A new REDFLY Media Port and REDFLY Media Cable provide a simultaneous connection as a third USB port and composite video input (NTSC/PAL compatible). Now the REDFLY's 800x480-pixel screen can be used to view photos, show demos and even watch movies. The Redfly Media Cable is available for a suggested retail price of $19.95.

Both models will be available the week of Dec 1st and can be pre-ordered from select Celio resellers listed at getredfly.com. The original Redfly model is also still available for $199. The devices are compatible with all Palm Treo's running Windows Mobile, including the new Treo Pro and Treo 800w.

Looks like we have seen this attempt once before and the crowd hated it.
http://www.palminfocenter.com/foleo/

RE: Here we go again

RE: Here we go again

Off the top of my head:

- Runs rather hot compaerd to the other netbooks

- Maximum of 1GB RAM (I think it's unofficially expandable to 2gb)

- No standard overclocking functionality for the underpowered Atom CPU. MSI Wind & Asus EEE "officially" offer up to 24% higher overclocks on the 1.6ghz Atom

-Slow GMS 500 (PowerVR-based) GPU. It has more features than the GMA950 but IIRC performs even slower in games & 3d apps.

Well, I would want as standard or a real HDD. I need minimum EIGHTY (not eight) gigs of storage in a netbook. I'd like to at least have the option to stick in one of the several 2.5" SATA HDDs I have sitting here.

My beef is just that in the $299-$399 price range, the Asus, MSI, Lenovo, Samsung etc. offerings trounce Dell's. And Dell's 12" netbook is sort of stuck in no-man's limbo between a "cheap" netbook and a cheap "real" PC. There's no reason to buy an underwhelming machine just because it's a Dell.

On that note, I wouldn't spend more than $420ish (tops) on any of the current crop of 10" or smaller LCD, 1.6ghz Atom-based netbooks. The Atom CPU simply offers much too little performance and is the biggest disappointment out of Intel since the Pentium D. Intel shouldn't be fooling around so much with the Nehalem launch and instead should begin pushing dual-core Netbook CPUs ASAP. Of course, without anything close to serious competion from Via or AMD, Intel's way ahead of the rest of the industry like it's 1994 all over again.

I think that netbooks have made this sort of product obsolete. Whatever you think of a particular model of netbook (I for one have an Acer Aspire One and like it a lot), it makes no sense to pay $300 for a device like the Redfly of the Foleo when you can get a mini-laptop for the same price. They may not sync to you smartphone as easily as these devices do but because Windows and Linux netbooks are real computers in their own right, they can still sync in a more traditional fashion.

The time for a device like this one was in mid-2007 when Palm announced and subsequently killed the Foleo. Netbooks still didn't exist as a category back then and there was actually room for an intermediate device which could be paired with a smartphone to replace a bulky full-sized notebook. Now, people are more likely to replace their laptop with a netbook which doesn't need a smartphone to operate.

Note that when you get a netbook or lightweight laptop, there are plenty of solutions for seamless integration between it and your phone: you can use the smart phone as a modem, there are screen sharing apps that let you use the netbook as a keyboard and display, etc.

Something like Redfly would be OK as a turnkey solution, but the sad reality is that machines like that become obsolete and incompatible quickly, while a netbook can easily be upgraded to keep up with new technologies.

Get a netbook instead; the Redfly is obsolete.

Sometimes you just get lucky

RE: Sometimes you just get lucky

*I'd* even put up with some HP garbage at that price. But for the commoners, HP is expecting $800 bucks for that, so it's really irrelevant to this thread regarding cheap netbook-type devices.

If your friend has a code we can use to successfully get that EPP pricing, please share it and I'll redact the prior sentence.

RE: Sometimes you just get lucky

Sorry, there was no code and I really had to twist his arm to get it for me. It's one of those things where he's only supposed to get it for personal use. He had to sign onto his HP business website to get to that shopping area. There was alot of stuff really discounted but the netbook was all I wanted. The version I listed was the only one available at the site.

I was planning to buy an ASUS 9" with XP and 6 cell batt with the hard drive as a new toy. This sort of fell into my lap. If I had bought the ASUS when I was going to it would have been too late. If I spring for an aircard it will be just unimaginably good, but I can't justify $60/month for the service.

As I get ready to buy something like (or even precisely like) an MSI Wind Netbook, I'm starting to be really sorry the Foleo was killed. I know, I flamed it too. I was all over corporate badmouthing their decision.

But they were right; and ahead of their time.

If only Redfly made a Palm OS unit.

The biggest problem was the limited features at the price point that they were marketing it at. There is no way that it would sell at $500. Heck $250 seems a little steep for as limited as these devices are.

The MSI Wind offers far more capability than the Foleo ever could or would.

And hey, if you don't like XP, you can inject Mac OS X into it.

fooleo and redfly are not netbooks. don't insult netbooks.

I had a chance to preview Lenovo's netbook in September at a conference. I loved it. It has better options than most of the others, including a multi-card reader for expansion. It was very sturdy in my hands and Windows XP ran very fast on it. Give it a look if you are looking for a netbook. It's the Lenovo Ideapad S series.

It comes with an 80GB harddrive and has RAM upgrades available. I was impressed when I got to use it.

It's lacking "N" wireless and has only 2 USB ports & a 3 cell battery. On top of that, the screen is a bit dimmer than the competition and it doesn't have any kind of standard overclocking capability for the Atom CPU.

I'd still take a Wind or EEE 1000H over it...I'd rank the Lenovo squarely in the 2nd tier of Netbooks alongside the Aspire One and maybe the new Samsung & Toshiba offerings.