An Israeli firm has announced what could very well become the first shipping smartphone running the Access Linux Platform. Dubbed the Edelweiss, the GSM phone features an impressive list of features most notably a 3.5 inch 480 x 854 pixel touchscreen display.

If there are any ALP holdouts still out there, you're going to have to likely plan a trip to Russia in order to get your hands on one. At this point, the Edelweiss is only rumored to be launching in Russia later this month. The company has created a preview site for the phone, while mainly in Russian, it does list the specs in English and shows the device from all angles. 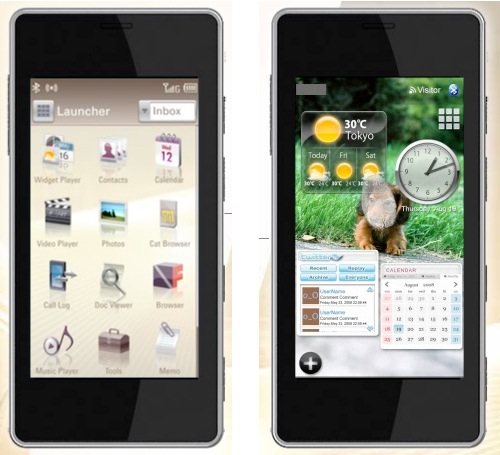 The Edelweiss is named after an alpine flower and was designed by Emblaze and is said to be manufactured by Sharp. Emblaze first announced a licensing deal with Access and Sharp just over a year ago. ALP is a the mobile Linux based Operating System developed by Access and the former PalmSource group. It offers compatibility with native mobile Linux apps, Palm OS Garnet Applications and Java (J2ME) apps.

Emblaze is also reportedly working on a second ALP device code-named the Monolith. It is said to be based on five years of research and will be announced sometime in 2009.

Thanks to Sven for the tip.

I don't see a stylus listed.

Too little, too late.

Well, THIS certainly came outta nowhere! Why didn't Lefty warn us about it!?!

Palm should license this a version of this thing, restyle it to support an internal stylus, and sell it as the "Palm Touch" AKA TX replacement.
Then, hit the ground running next year with a refreshed model bearing WiMax support. Oh nevermind, Nokia's already got them beat in that department.

The UI does look quite lovely, to be honest.

WMV isn't a big deal to support. If it's a typo, then fine. If it's not, then that's certainly plausible as well. This ain't FrankenGarnet we're talking about. Had this news been dated 12 months earlier, it might've stood a fightin' chance.

Like the big "Made In Japan" on the back.

If Agendus runs on this, I want one!

Hey Mike. What is a WTF Codec?

** It is said to be based on five years of research and will be announced sometime in 2009. **

Sounds about like Palm OS Nova. This should take the world by storm. :-D

These are just PS images and not photos of actual devices. Are we supposed to be confident in anything that is affiliated with Palmsource and a tangible product?

Based on prior ALP "products", I'll believe it when I read an independent review.

How hard is it to port third party programs over to this?

The UI looks excellent. I hope it gets some traction and comes to the US. It would at least interesting.

the cobalt photoshop looked good too.

Port them from what? If you mean from Garnet, it depends on whether this device has Ghost implemented.

Questions for Lefty or anyone else familiar with GHOST

1. How will this thing translate calls for hard/app buttons from legacy POS apps? I assume all of those pixels will be used for some kind of onscreen buttons.

2. " " stylus input/Graffiti strokes? Will there be an onscreen DIA that pops up so you can try to scrawl Graffiti characters with a fingertip?

4. Is there going to be any kind of "ALP Desktop" for Windows/Mac and, if so, is any provision made for importing users' legacy Palm OS PIM data?

Btw, it's a German word.

Guys, the W is pronounced almost like a english V. Okay?

I would agree, except for the fact that the product website spells it Edelweiss. Can't really argue there, even if the company misspelled the word in question. :)

But they've already written the jingle and made a commercial:

"I would agree, except for the fact that the product website spells it Edelweiss. Can't really argue there, even if the company misspelled the word in question. :)"

In German, the written 'w' is pronounced as the english 'V'. It's spelled correctly, afaik.

Does ALP have a compatibility mode to support PalmOS applications?

That depends on whether or not they've implemented "Ghost," or Garnet Host, on this device. It's an optional component on ALP, up to the manufacturer whether they use it or not. We don't know if it's included on this.

They'd be stupid not to include the compatibility layer.

Doesn't Ryan's piece say that it does. Or is that just conjecture?

He mentions that ALP includes compatibility, but I don't think anyone knows anything for sure about this device. I know that Access was talking for awhile about Ghost being a removable component if a manufacturer didn't want it, so I just assume that it's an open question until confirmed by them.

Obviously he's unemployed. And knows nothing more about ACCESS and ALP. Because he never came here to gloat and/or answer questions about this niche - and possibly even phantom - product.

Meanwhile, the delusional SOB comes over to my blog for a smackdown:
http://mikecane2008.wordpress.com/2008/10/15/to-the-unemployed-banned-psychopath/

You banned him? What's with that? I never dreamed you'd take the wimpy way out.

don't kick the guy when he's down. karma is a bitch.

Sorry to disappoint, but I'm still quite gainfully and happily employed here at ACCESS, of course. In Singapore last week, in Tokyo this week, in London the week after next, over 130,000 miles worth so far this year. I'm presenting at AJAXWorld this coming Monday in San Francisco, as it happens. Busy, busy. (Can Mikey claim as much...? He's still drooling on other people's equipment, last I heard, evidently not solvent enough to be able to afford any of his own...)

In particular, I'm too busy to waste very much time here listening to the incessant whining and vituperation, much less responding to it. Couldn't resist poking at Mikey over the continuing lack of his imaginary but coming-from-Apple-any-day-now-for-the-past-year-or-so iMacPodBookTouch "Air", though. 馬;鹿;に;つ;け;る;薬;は;な;い;。;Some things never change...

Okay, so I have a low sense of humor. But you knew that.

As for the rest, "We don't comment on the unannounced or unreleased products of our customers and licensees." Deal with it. Go ask them about it if you like.

(And, yeah, twrock, you're exactly right: Mikey tries-to the best of his very limited abilities-to dish it out, but he hasn't got the slightest capacity for taking any in return...)

> ..."We don't comment on the unannounced or unreleased products
> of our customers and licensees."...

We did! We did! There might have been a few comments about a Samsung uncommented-about unreleased product!

Aren't they pretty much all unreleased products from Access? The best Vaporware money can buy next to Palm.

London the week after next
Please tell me that there'll be an Edelweiss or some other ALP product to check out in LinuxExpoLive in London!

is mikecane still around? jebus. i thought the trolls had left the building.

Notice Leftoid's Comment was all about me. Not one bit about anything REAL from ACCESS Vaporware/FAIL, Inc.

Have a big glass of that melamined milk, willya, Lefty? It'll cure what ails ya: LIFE!

"The tides of health will soon turn on you and humility will be your crown of thorns." - jstar

Asses OS has a better ring.

So, Edelweiss, the choice of phone for the Russian Oligarchy, huh?

Very interesting move. For those of you who have not been to Russia in the last twenty years, the place is long past food shortage lines and propaganda posters going along poorly maintained highways.

It is vibrant, energetic, full of money - not to mention some incredibility hot girls in discos! - and a very good place to introduce a phone like this. There are some parts of Moscow that would make Park Avenue look like a Wal-Mart! Apple has been hesitant to officially market the iPhone in Russia while it is estimated half of the jail-broken iPhones are in this country. This looks like it is aiming to fill the gap.

Overall a good and surprising move. This could become a "proving ground" for introducing ALP into other parts of the world. When it comes state-side, perhaps the "enhanced with Russian technology" could be in the promos with this being the first market.

Lefty, enjoy your trips there and just bring your own bottle to the discos and only take a taxi called from your hotel where the drive can call our your name without him asking for ID.

>>>There are some parts of Moscow that would make Park Avenue look like a Wal-Mart!

If their stock market keeps crashing, it'll go back to looking like Comrade Wal-Martski again.

...Apple has been hesitant to officially market the iPhone in Russia...

Basically any country where the carrier wouldn't give a massive subsidy to the sales price of the iPhone. Russia, India and China are countries where mobile contracts aren't used and the user pays full price for the phone and that violates Apple's perceived market approach.

Inflammatory, Inappropriate, Illegal, Inane or Offensive comments may be edited/deleted.
If PIC aren't going to apply their own standards to mikecane's crap, why does anyone posting here need to be civilized or polite?

Oh boo hoo. Some eejit who just joined PIC this year is suddenly cognizant of its history and interactions between its veteran posters.

And he doesn't wike it.

Take your ball and go play with yourself. (Yes, that's a two-parter there.)

Rastick, Cane is just a crotchety old man with a net connection and too much time to waste ("verteran [sic] poster", he calls it).

"Inflammatory, Inappropriate, ..., Inane or Offensive" describes 90% of his posts, so don't expect that is going to change any time soon. (I don't recall him posting anything illegal, but I might have missed something; he does make a lot of references to "pr0n", who knows....) Obviously no one here needs to be "civilized or polite," but some will appreciate it if you are.

And Mike, I still think you are a wimp for banning Lefty.