The palmOne online store is currently offering a number of specials and free bonuses on handheld purchases. Read on for a comprehensive list and special offers. 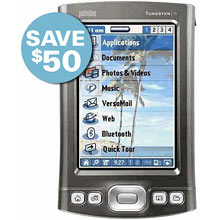 All of the above specials and deals can be found at the palmOne online store.

...especially at the high end of the handheld line.

We're seeing a CDN $100 discount on the T5. Not only that, the WiFi card is thrown in to the bag for good measure. More evidence that a new T5 killer is afoot.

Given how poorly the Tungsten T5 is selling (it flopped big time!), PalmOne must do everything it can to flush this poop-on-a-stick handheld out of channel. Even the Hp iPaq rx3115 is outselling it by a wide margin, and that says a lot.

Perhaps they should have gone back to monochrome, and not just stopped at removing the vibrating alarms and smaller form factor...

Oh well, there seems to be no pleasing Palm's low-end users... Maybe they'll start designing for the "Power Users" again... :)

that might require inovation... and innovation in the palm community hasn't really been seen since sony dropped out :(.... damn i miss sony, their ONLY flaws were propriotary and price... :(

I'll buy a new Palm when it fits the following:

1) Screen and form-factor of the T5
2) WiFi AND Bluetooth
3) Battery life that doesn't suck (OLED can help here)
4) Memory speed that doesn't suck
5) Metal case
6) Cradle
7) Vibrating alert
8) This new high-tech thing called an LED which lets you know it's plugged-in and charging (and can flash to alert you.. wow)
9) Graffiti 1 as an option (even if G2 is default), since the lawsuit is a moot point now (and you can get G1 on PPC, hello)

Funny, I'm only one of a bazillion people asking for this. But no one delivers. It's always some half-baked unsuitable compromise. This isn't unreasonable. The technology exists to pull this off. And price isn't such a big deal. I would pay to get this. The problem is, this perfect PDA isn't available at ANY price (unless I want to go PPC, but no thanks).

And who knows... maybe some day we'll get a decent web browser too...

and move the dpad to the left, change it to a mini joystick (so handy on phones), and have 2 rows of 3 app buttons to the right. We grew up on handhelds with a dpad on the left (eg. Donkey Kong 25 years ago), likewise with joysticks on arcade games. The status quo might win out aesthetically, but not functionally.

You call these SPECIALS?

The prices and products suck.

Yea, it's not a news article, it's a banner ad. And please get rid of the "sticky" news article at the top. Let it cycle off the main page like the rest. The "featured article" is over a month old, and the "latest palmOS news are from last year".

Or is the "sticky" nature of that article a paid product placement story from Palmone/Palmsource?

You now have new marching orders from the dumb masses.

* Don't prominently link to product reviews for Palm OS handhelds that are currently sold from palmOne's web store and other retail outlets.

Isn't it great to have all this expert help with this website?

I absolutely agree. These are merely advertisements, and not a real news story. I know the owner of PIC has to make money off this website to cover expenses/gain a profit, but as a media source, it shouldn't be biased. (e.g. promoting PalmOne products) Otherwise, how can we trust reviews on this site knowing that PalmOne pays you to advertise their links? It implies most reviews have a positive spin to it possibly.

RE: You call these SPECIALS? Yes I do. Dumba$$.

Ignore the idiots, Ryan. Post whatever you damn well feel is appropriate for the site. If the whiners don't like it, perhaps they should spend their own time and money to create a site for us all to use.

The item about price reductions will be appreciated by many PIC readers who may have been unaware of the new offers.

Remember, Ryan - you can't win. Post less articles and people biotch that there's no news. Post regularly and they still biotch. People should S T F U and be grateful that you work so hard to keep us updated with items regularly - even if not every bit of news is of interest to every single reader. Sheeesh.

so it's ok for you to barf on jobs in your tagline, but we can't make constructive remarks about pic?

The "constructive criticism" comes across as nothing more than whiney biotching. Don't look a gift horse in the mouth. Pray PIC doesn't get "PalmStationed".

The voice of reason, is it fair that PIC promotes PalmOne products? What about Zodiac? Clie's in Japan? etc.

This site should be called PalmOneInfoCenter, as it clearly promotes their products, and not Palm's in general.

Your attitude is not welcomed. Constructive criticism is.

Voice Boy - Working the PDA counter at Circus City does not qualify you as an industry expert.

"A good rule of thumb is 've made it to 35 and your job still requires you to wear a name tag, you've made a serious vocational error." - Dennis Miller

"A good rule of thumb is if you've made it to 35 and your job still requires you to wear a name tag, you've made a serious vocational error." - Dennis Miller

The voice of reason, is it fair that PIC promotes PalmOne products? What about Zodiac? Clie's in Japan? etc.

This site should be called PalmOneInfoCenter, as it clearly promotes their products, and not Palm's in general.

Your attitude is not welcomed. Constructive criticism is.

The Voice of Doubt (When did this become The Faces of Eve?), Palminfocenter promotes any PalmOS product who's company still has a pulse and has the brains to send Ryan a press release in a timely manner. Do a search of PIC's archives and you can confirm this for yourself:

Last time I checked, Tapwave hadn't released a new PDA in a Real LOOOOONG Time and hinted that they wouldn't be putting out a new Zodiac until at least 2006. Yeah, right. You can stick a fork in Tapwave - they're done. And has anything significant happened to Tapwave since these stories?

At least anything that Tapwave has formally announced?

And what do you propose PIC (an English language site) do about the Japan-only, Japanese OS only (and now discontinued-in-Japan!)CLIEs? There are probably less than 100 VZ90 in the United States. There are also probably no more than a dozen or so TH55DK scattered around the US. Not exactly big sellers, are they? And as soon as Ryan posts a CLIE article, some moron will biotch saying there's no need to post items on discontinued models.

Unfortunately, the only PalmOS company now left is pa1mOne. Who else is there to write about now? Don't shoot the messenger, Bubba. It's not Ryan's fault.

And why aren't there more posts about camels these days on Palminfocenter? http://www.palminfocenter.com/view_story.asp?ID=2514 Those were the days...

And is Mike Cane dead? We're all preying for you, Mike.