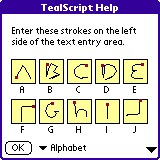 Pushed to the backburner by Palm's focus on Treo devices with QWERTY keyboards, Graffiti character input still has a legion of fans. TealPoint Software has just released version 3.93, primarily a bugfix release, of their long-time Palm OS utility TealScript. TealScript brings on-screen Graffiti text input to Treo and Centro smartphones that do not have a dedicated Graffiti input area like their Palm PDA brethren. In addition, TealScript is fully trainable and can restore much of the original Graffiti 1 strokes that have not been officially available on a Palm Inc. device since the Tungsten T of 2002.

TealScript costs $29.95 to register and a fully-functional demo version is included. For owners of older Palm OS devices picking up a TX or E2 from Palms huge "Black Friday" sale, TealScript can quite likely ease the transition from an older Graffiti 1 device to these newer Graffiti 2-enabled handhelds.

I wish i had tealscript on my pocketpc

graffiti 1 was the best. now that I have a windows mobile device, the included Block Recognizer is not even close to graffiti's functionality.

No CMD swipe
No "alphabet shortcuts"
No regular shotcuts,
character recognition is worse...

RE: I wish i had tealscript on my pocketpc

Yeah, Block Recognition is okay for letters and most numbers, but I agree that the power of Graffiti One was the direct access to various commands and shortcuts. It may be 2007, but nothing better has come along to replace what was taken from us when G1 was ditched.

welcome to 2008. some people must be dragged fighting, kicking, and screaming.

Some people just know what works for them.

Graffiti One is a damn good input system, quick and efficient. Although the keyboard has some benefits, direct access to many of the commands via "forward slash" was a whole lot easier than the convoluted keyboard method we're stuck with today.

And, don't even get me started on Graffiti Two (aka "adding unnecessary stylus movements means we're not violating your patent, Xerox...").

The Question That Shuts Up Gekko:

So, Gekko, did you get that Centro yet?

if i ever get to choose, i'll probably go for the latest and greatest, top of the line BlackBerry.

That reply doesn't fly, Gekko. Work-issued Treo? In which you put all your private womanly Contacts? I. Don't. Think. So.

When that's done with stray cats, it's usually to sterilize them.

I'm sure you have the same effect on women.

And still Palm forces G2 on us!

Xerox can still appeal that verdict.

It's three frikkin years later. A judge would throw it out. Lack of timeliness. No urgency. Nuisance appeal.

That was not the last volley in the Xerox/Palm dispute. There were two more volleys:
1: June 8, 2006: Xerox Graffiti Lawsuit to be Reconsidered: http://www.palminfocenter.com/news/8628/xerox-graffiti-lawsuit-to-be-reconsidered/
2: June 28, 2006: Palm and Xerox Settle Graffiti Dispute: http://www.palminfocenter.com/news/8696/palm-and-xerox-settle-graffiti-dispute/

>>>and each is entitled to a fully paid-up license to the Unistrokes patent.

Which I guess Palm won't bother to carry forward. Hmmm, will ACCESS? (Didn't people here say the GarnetVM for the DieNokiaDie Anti-Net Tabs has G1 in it?)

I think the main problem is that Palm spent all that time and money attempting to B.S. their users into believing that Graffiti Two was somehow superior to the original. At best, many people "got used to it" but rarely does anyone say G2 was anything but a huge step backward from G1.

If the legal case is finalized, it would be great for Palm to include an "option" of G1 as they claimed years ago they'd do. But since they need to hold the position that G2 is "superior" to G1 it's highly unlikely they'll budge and the best we can do is keep hacking the old T1 library into the G2 devices.

Palm & Xerox could have made an agreement and *sold* us a G1 module and then split the money 50-50 or whatever. They'd win, users would win (and my LifeDrive would have one less of many reasons to be a piece of sh*t. Man, does G1 on it suck!!)

Graffiti 2 was a step forward from G1 in at least one respect. It's easier to learn because its characters more closely mimic normal handwriting. So while you can never be as fast with G2 as you were with G1, you can pick up any G1 equipped PDA and use it without learning to use its writing system. So while many just "got used" to G2 without falling in love with it, for me that was enough that I didn't have to learn a new Graffiti -- I just had forget about the old Graffiti which was a lot easier to do than it was to learn it in the first place.

Before Palm dumped Graffiti because of the Xerox lawsuit Jot was one of the number one add-on programs for the PalmOS. Now, with Jot having been essentially integrated into the PalmOS as Graffiti 2, G1 clones are all the rage. You've got to admire the symmetry.

Odd how Access is shipping classic G1 with the Nokia Garmet VM and no one from Xerox is making a fuss...

See, this goes to show that Palm *COULD* do it but they *REFUSE* to do anything that would, ahem, "delight the customer".

I think the term you seek is "defile and deride the customer."

Thanks for reminding me: Colligan, RESIGN!!

Right now Access is making no money off their Garnet emulator. What would be the point of suing them now? Don't assume that Palm doesn't have a bullseye on its head just because Access can fly under the radar because no one cares what they do.