A leaked AT&T presentation has been posted in the TreoCentral forums. The document appears to be an internal briefing on the upcoming Palm ROM updates for the Treo 750 and Treo 680. The plan details the procedure for the imminent Windows Mobile 6 upgrade for the Treo 750, and a comprehensive OS update for the Treo 680 as well.

The document basically confirms the flurry of WM6 update rumors that have circled the 750 since its release in 2006. As expected, the WM6 update will be free and will also be pre-installed on new 750s supposedly beginning this month. The HSDPA 1.8 upgrade will be contained within the update as well improved phone controls and new AT&T Entertainment applications (CV, AT&T Mall, AT&T Music). The AT&T promotional materials do specify an October 15th date which has unfortunately come and passed but hopefully the delay will not be as long as what Treo 700p owners were plagued with throughout 2006 and 2007.

Palm's most recent Garnet-powered GSM Treo, the 680, has already received one comprehensive AT&T update and another major update looks to be in the works. According to the same leaked document, Push To Talk (PTT) functionality will be added to the 680, something that was rumored last year but had not been mentioned in recent months. In addition, new applications will be loaded into the 680s ROM, consisting of IM clients for Yahoo, AIM, Windows Live, TeleNav, and MobiTV. No word as far as version numbers or if these apps are altered from the commercially available versions or from the IM client included with Sprints Treo 755p and Centro.

MobiTV has historically performed far better on EVDO and wi-fi enabled devices than the slower EDGE GSM handsets such as the Treo 680. Its possible that after the network optimizations resulting from the iPhone release and/or MobiTV server tweaks, AT&T feels that MobiTV is now a more viable experience on the 680. 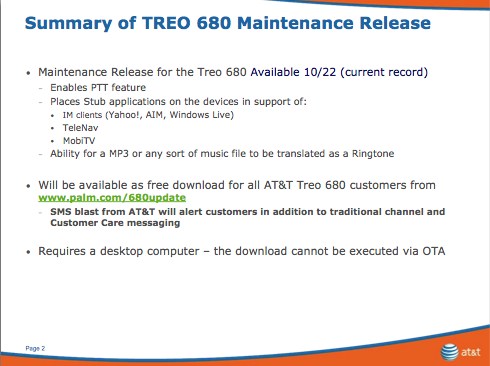 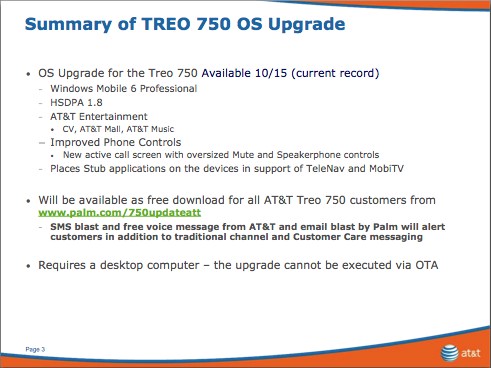 The leaked info goes on to say that both OS updates will be free and available at dedicated download sites directly from Palm. SMS notifications will be sent to current device owners and the updates will of course require a desktop PC to load, as the amount of data involved is far too large for OTA installation.

Factory-updated 750 handsets are scheduled to arrive in AT&T stores by the week of October 22nd and updated 680s are scheduled to arrive the week of October 29th. AT&T corporate stores will receive a launch kit consisting of revised product data sheets, updated sales cards, OS install memory cards, and a variety of additional supplemental material.

I have an unbranded Treo 750 and still waiting for my update, while our European friends with a Vodafone Palm Treo 750v have already received theirs a couple of moths ago.

I guess this AT&T ROM Update (which had been floating around on the black market for quit a while) doesn't simply mean the unlocked Treo 750 devices will get their upgrade too.

How is that being delivered? Through a new OS feature or some 2nd/3rd party program?

And will it come to unlocked 680s?

I paid extra to get an unlocked 680. Where the hell is my ROM update? I'm still not caught up with the current AT&T ROM. I'm fed up with Palm

If you have an unlocked phone and don't use AT&T, the PTT feature would be useless for you. The other features will probably be made available by Palm when the people at AT&T finally release the patch.

A big part of the delay may be caused by Windows Vista. Think about it, since you need to patch from a PC, if the OS can cause things to break, AT&T really would be better off delaying the release until the patch/update process causes fewer problems than they solve.