Palm's latest smartphone, the Treo 500v, was launched on the Vodafone network last week to generally favorable reviews from European users. Yet no mention has yet been made of an eventual appearance in the United States by the device and Palm has remained mum on the matter. Adding fuel to the fire that this would be a Europe-only release is the fact that the 500v only has a tri-band GSM radio.

But now U.S. GSM users have some slight reason to be optimistic, as Palm has sought and now received approval to sell the Treo 500 in the US. The FCC documents show that Palm has approved two versions, one with a Treo 500v label and another showing just the Treo 500 name. 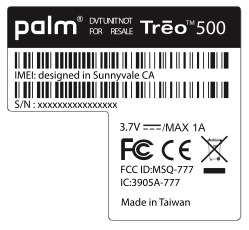 Another interesting fact gleaned from perusing the documents on the FCC site is that Taiwans ASUS appears to be Palms new ODM of choice, not Inventec as stated by industry journal Digitimes in the article we reported on last week.

The mere fact that this device has received FCC approval in the first place is a strong hint that it will likely arrive sooner rather than later in the United States. Palm requested confidentiality on a number of items such as the standard pictures and manual, which further indicates an imminent release of a US-spec version of the 500 with quad band GSM radio supporting the 850, 900, 1800, and 1900MHZ frequencies. The GSM 850 and 1900 bands are most commonly used in North America while carriers in most of the rest of the world have standardized on the GSM-900 and 1800MHZ standard.

The reasons for Palms delay of the Treo 500 for domestic markets are unclear and could be attributed to any number of business or technical factors. While no pricing, release date or carrier availability has yet been mentioned, its likely that the device would launch alongside Palms traditional GSM partner stateside, AT&T Wireless/Cingular, as T-Mobile has not offered a Palm-branded device in the US since the Treo 600. If AT&T is indeed the carrier of choice for the Treo 500, Palm and AT&T Wireless could possibly be prepping for a simultaneous launch of the Treo 500 alongside the still suspiciously absent Treo 750 Windows Mobile 6 Professional update. This would keep the newer, lower-priced, and more multimedia-savvy 500 from stealing any of the older but pricier 750s thunder.

The Treo 500v is Palms first Treo to ship with Windows Mobile 6 Standard as well as its first device bearing Bluetooth 2.0 and a 2.0megapixel camera. The 500v is also the first device in Palms 11-year product history released without a touchscreen LCD.

What is the Centro then?

If this is gonna be the Treo 500v in the US... than definitely Palm Centro should be something else... I wonder if the Centro is really a name of the phone or a service ala iTunes which will be the "Center" for multimedia downloads over the air?

remember Palm was quoted as saying that there was something "bigger" behind the Centro...

It's really hard to get excited about a company that makes cellphones. On top of that cellphones running windows. Remember when Palm made handheld computers? Those where the days.

I agree with you. Even with HP's latest offering of handhelds, I don't see any replacement for my T|C. No one can seem to hit a bullseye. iPhone is the up-to-date technology I want, but they didn't see fit to make it a PDA. Thats an omission you could float an aircraft carrier through.

This is like WWE wrestling where one dude is just beating the heck out of the other. Then all of a sudden the other wakes up and starts letting the opponent have it. Frequently one will be on the ground and the referee will get 2 slaps, but the guy on the ground kicks up.

You could replace the wrestlers on WWE with Palm, Apple, HP, etc. It's all a game. Last year Dell wore the champion belt, now they are gone completely out of the picture.