Rumor A copy of what appears to be an internal Sprint Document has been posted on TreoCentral's message board. The poster claims the document was shown to him at a Sprint store and he was permitted to take a photocopy. If accurate, this story would confirm earlier information told to PalmInfocenter that a Treo 700p was planned to be released by Sprint in the May/June timeframe. Read on for the details. 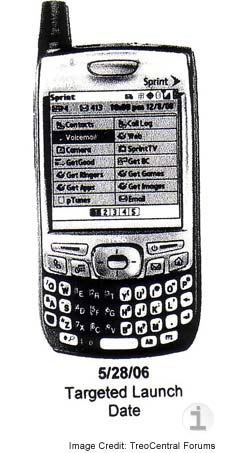 The scanned document from TreoCentral lists the following features:

The document can be found on page #9 of the forum thread. Photos and similar details about the Treo 700p were first posted in early February.

As with all message board rumors, keep in mind that something like this could easily be cooked up. The targeted release date listed falls on a Saturday, which kind of casts a little bit of doubt on the accuracy of that expected launch date. It is possible that could just indicate a general time frame for availability.

UPDATE: The Palm Treo 700p has been officially announced.

Thanks to Surur for the tip.

I see a couple of red flags with the specs listed

THEORY:
If ANYTHING, the 128mb of memory is gonna be T5-style....64mb storage volume, 64mb program memory, because....
*insert drum roll*...Palm WILL release wi-fi SDIO drivers for this and they don't want people to be totally devoid of storage with a wi-fi card in their SD slots! Remember Ed's comments a few months ago about wi-fi being an "important component in Palm's future plans?" Having an OPTIONAL, bulky, and overpriced SDIO card gives Palm the best of both worlds--they can trumpet wi-fi on paper while not giving a finger to the carriers and creating more tradeoffs than benefits for users who have a wart sticking out of the top of their Treos and lose all of their external storage capability.

3. BT DUN modem functionality? Not for Sprint's $15/month pricing plan...this is entirely an economic measure by Sprint vs. a Palm design decision or a technical limitation of FrankenGarnet.

They are just re-using the Treo 700w hardware exactly. Its probably partitioned in the same way. Merlyn_3d said there was 62.8M available for installing software (very similar to Treo 700w).

So what would the exact total be? Like 62.8 available to the user, 10mb for the heap and then ~56mb available for application storage?

Sounds good enough for me.

POS Garnet is very much similar to a single tasking WM5 device. The connection between storage and ram has been broken a while now. The TX probably had 128MB flash and 16MB SDRAM. The OS was probably installed on the 28MB flash, leaving 100MB for storage.

According to early reports, it's 128 MB total flash, with about 62 MB available to the user, the other 66 MB being taken by the OS plus built-in apps. This is pretty much exactly the way it is on the 700w, too.

We'll have to see about the 32 MB of RAM. Given that they already have to retool the 700p for a different screen, it might not be impossible for them to drop in a 16 MB chip instead.

The leaked Treo 700p had 18 MB dbcache and 10 MB Dynamic heap. I expect it would be more trouble to use two different motherboards, vs just using the same motherboard with 2 different ROM images. This way they can manage supply and demand very easily also, with one less supply chain problem.

Looks boring, relatively speaking - why am I supposed to be excited about this?

And that actually is a serious question!

People with inexpensive access to fast networks will care. Others will have to think twice before making an upgrade from a 650. Nice jump from a 600, though.

I really don't understand the ergonomics of moving the menu key to the bottom of the keyboard. What's the key you typically press right after the menu key? Why, it's probably one of the D-pad keys, to navigate through the menu structure. And where are those D-pad keys? Why, yes, at the TOP of the keyboard, almost as far away from the menu key as you can place them. Dumb.

Still the same old case style of the Treo 600, big sticking out lump at the top. Er, no thanks Palm. I'll give you an E grade. Next time, try to update the several years old Handspring design with a better case then you may get some sales outside the US where most of the population of the planet lives (and buy phones).

I'm mainly interested in the future of palm. Even if they do end up liscensing ALP, that's a long time away. I want to know what they do OS-wise in the meantime. To boot, I want to know if they're going to be releasing any non-Treos before the end of this year (can they walk and chew gum?), and what they will look like. A TE3 winmob device? Can they revive the mobile manager and will they try?

Even if Palm does survive or thrive in some form, I'm not bullish on my next handheld being Palm. But I'd like to be wrong.

>>Next time, try to update the several years old Handspring design with a better case then you may get some sales outside the US where most of the population of the planet lives (and buy phones).

This is the best thing Palm has going... Why would they want to mux that up?

Remember re the antenna that this is a Sprint document(so it's CDMA rather than GSM). There's supposed to be a GSM model coming (still rumor for now) with an internal antenna and thinner design, which would please a lot of people both in and out of the US.

We may or may not see a GSM equivalent of this model.

quote:"This is the best thing Palm has going... Why would they want to mux that up?"

I never said get rid of the good bits, they just haven't got rid of the bads points despite the Treo 600 being 2-3 years old. There is no need for a big lump sticking out on a phone that is already several times larger in volume than other phones.

If the only thing we are b1tching about a week after the 700p comes out is the antenna, then Palm has my money.

I highly doubt they won't cut corners where they shouldn't, so don't lay money on it. But with all the time they've had to get the bugs out of Handspring's Treo 600 released in October 2003, the 700p should AT LEAST be able to:

* Use the accessories that we bought for the Treo 650

* Have at least the hardware specs of the 700w

At the Treo has the dubious distinction of being on the highest-end of the radiation releasing scale, my hope is that the external antenna serves a functional purpose. Other than blocking the ability to use some SDIO accessories it doesn't bother me.

Yeh, radiation wise the Treos are monsters. You would think with that radiation stick at the top and SAR rating they would be good at holding a signal compared to other phones but they are pretty bad compared to Nokia or Sony E.

That much radiation and an external antenna which doesn't hold a torch to Nokias with an internal, suggests that Palm haven't got the hang of all this RF stuff.

I wonder why my comment about how 4 out of 5 PalmSource codemonkeys prefer Analogue instead of digital was deleted. Looks like the "New & Improved" Palminfocenter has been sanitized to the point of absurdity.

Over the past 6 years I've tried to keep this site interesting, but I see it's time for TVoR to step aside now.

what don't you understand?

I've told you many times, references to profane sexual acts & flamming are not welcome here. I can't be any more clear on this.

Look dude, I think many of your posts are insightful and funny. But if you can't contribute to the discussions in a respectful manner, I am going to remove (x-rated) inappropriate comments.

when I get the new comment system in place, I will have more toleration for foul/offensive humor and would likely leave your dirty jokes stand, albeit moderated down.

But until that is ready, I just can't leave offensive stuff like this on the site for everyone to see. Its nothing personal, I hope you understand my pov.

That's too bad. I wish it has Wifi just like TX.