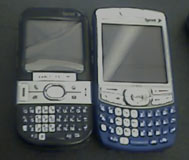 Palms latest Garnet-powered device happens to be its first smartphone devoid of the Treo branding. The Palm Centro is low-end device running the Garnet OS for CDMA networks and Sprint as the exclusive launch partner. Palms semi-announcement last month indicated that an entry-level EVDO device would exclusively debut on Sprint sometime this fall. The Centro is essentially a smaller Palm OS version of the Treo 500 expected to be released tomorrow for GSM carriers. The release date of the Centro for Sprint is expected to be October 14th with an estimated price of $99 with contract.

These latest Sprint documents also make no mention of the rumored Treo 800w, previously thought to be Palms flagship release for this fall. The Treo 800w is anticipated to run Windows Mobile 6 Professional with EVDO Rev. A for both Sprint and Verizon networks.