Rumor: Just days before the unveiling of Palms latest smartphone (presumably a Windows Mobile-powered GSM Treo), additional details have surfaced on PhoneNews about the upcoming Palm Centro. The Centro a.k.a. Gryphon is generally acknowledged to be the equivalent CDMA device to the GSM Windows Mobile Standard Gandolf rumored to be announced this week.

The Centro is expected to debut on October 14th for Sprints CDMA network. The latest leaked photos from Sprints 4th quarter 2007 roadmap verify the black and silver color scheme first seen in detail here in addition to the white and silver color seen here. 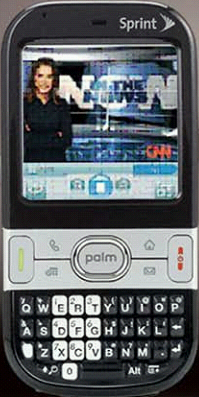 Based on the handful of details provided on the PhoneNews article, the Centros software bundle and preliminary specifications appears to be an almost mirror image of the Treo 755ps aside from a smaller screen, keyboard, and (presumably) battery. Listed on the Phonenews report for the Centro are both Sprint TV (as seen in the leaked image) and Sprint Music Store. Additional bundled apps are Sprint Mobile Email, Google Maps, VersaMail, Sprint Instant Messaging (likely what was depicted onscreen in the previous Centro image), and Pocket Tunes Deluxe (the first time the Deluxe version has shipped standard on a Palm device). No hardware specs are detailed in the report other than a 1.3 megapixel camera.

Based on the preliminary specifications, strong software bundle, and rumored $99 price point, the Centro appears to be a far better value proposition than its pricier 755p sister device in the Sprint lineup. Even if the Centro lacks Documents To Go, PTunes Deluxe is a superb choice to be bundled the device, especially if Palm is targeting the media-savvy youth market with this release. Previously leaked photos have confirmed that the Centro uses the updated Phone app first seen on the Treo 680 and not included on the Treo 755p. Earlier reports also indicated that the Centro will have EVDO Rev. A but this has not yet been confirmed at this time.

Any update on Palm's own software on the Centro

So far, have we heard of any software update on this Centra device that comes with Palm itself? For example, any update on the OS itself? Or any other update on Palm's own bundled applications, such as VersaMail or other applications?

Given Palm has licensed the Garnet source codes long ago, will be Palm improve the Palm OS Garnet?

I think we'll see the same versions of Blazer and VersaMail along for the ride here and Palm's gonna try to milk one more run out of those aging, rickety old apps. Maybe bundling PTunes Deluxe will "distract" the kiddies long enough to not notice VersaMail getting flaky and not deleting messages off of the server after a few months of use?

Intended to be a BlackBerry Pearl Fighter?

this is the first real form factor improvement since the treo 600 was introduced over 4 years go.

I suppose "improvement" depends on how proficient you are at two-thumb typing. ;) Still, Palm may be on to something with the smaller QWERTY - everytime someone else uses one of my Treos, they always instinctively use one thumb rather than two. If anything the Centro may be even more practical for one-handed use than the bigger Treos.

But yeah, it really does look quite attractive in black. Palm should have put out these pics as soon as those first, ugly spy shots came out... might have helped soften some of the criticism. So long as this isn't the direction they intend to take all of their future phones in, it's a very welcome addition to the family.

(Would have better in clamshell though...)

Form factor improvement? The 700P screen is about as small as my aging eyes can handle and the keyboard about as small as my big hands can operate. Lastly, I doubt it has a decent capacity battery and it is unlikely that they've made some earth shattering reduction in power consumption. Size matters! I won't be buying anything in this form factor when it was already a compromise to move to the 700P after having a Tungsten C.

I suppose that this form factor is meant to appeal to kids who have never heard of a PDA and will be elated to have a screen 70% larger than their last phone, as well as a full keyboard. Just don't inflict a POS version on the kiddies, else a lot of them will be thrown (literally) when it hangs or skips while trying to play MP3.

I'll hold out for a classic format Treo running the Linux OS and with a POS environment running on top. Only with Linux will they be able to eliminate the hangs and other problems caused by the lack of memory management and the lack of true multitasking...

Yeah, I don't know if this is a form factor improvement. It's just a diff't form factor that may appeal to different people. A smaller keyboard and screen definitely would not count as an improvement to me...

Disappointed, but not surprised that it is not 3G - had it been 3G it would really have been something interesting at that pricepoint. If the app list is correct it comes *bundled* with two email apps? That's just dumb, it could be confusing to the consumer and wastes ROM. And I wonder if that VersaMail is really a renamed and improved Chatteremail? I haven't seen any of the effects on having hired Marc Blank, yet..

<http://comments.deasil.com/> that is my tech blog. There are many like it, but that one is mine.

i hope the centros specs are not watered down. OR at least i hope that palm makes a treo with this form factor but with powerful specs.

my fear is that this is an entry-level kids model with tepid specs and now power-user model with this nice form factor will be produced.

Treo is a brick. A lot of people at the hospital gave up on them because they are too big to carry.
I've seen cracked screens on the keyboard phones.

Give me a worthy clamshell Palm phone so I can finally replace my SPH i-500.

A Palm user [to the bitter end?]

agree....Motorola's Ming is the form factor I would like with a Palm OS.

You know, that's exactly right. I wish they *would* release a modern Treo with something like the old Treo 90/180/270 form factor. Treo 90 size (and lack of antenna stub) would be just about right, but I wouldn't complain too loudly if it had to be a few millimeters thicker to deliver decent battery life.

My biggest complaint about the Treo (as well as the BlackBerry) is that there's no built-in protection for the keyboard and screen so you're pretty much forced to carry it in a case on your belt, which add still more weight and bulk, looks dorky outside the office and if you're at all active gets banged around and caught on things.

put it in your front pants pocket, silly.

Nah Gek, Beersie's right - you have to treat the candybar Treos with extra care. I could happily throw my 270 down on a desk or shove things on top of it in a drawer without worrying about scratching or cracking the screen. The only protection I have for the 650 or 680 is the flimsy little screen protector. it doesn't exactly inspire confidence, y'know?

Re Moto Ming - I usually think of a "clamshell" as something that actually does something with the extra real estate (eg QWERTY + big screen), not just a candybar with a hard flip up screen protector (like the ones we all removed from our M series Palms).

why would you want a Palm OS at this point?

What's the point? They have stated that it will be a dead-end, no?

Why not cancel this obsolete phone too, like the Foleo as it will more than likely just be more bad PR distracting the lame executives from their "primary business" blah, blah, blah...

It's dysfunctional user time as we get all excited over new 'deck chairs,' and old refried operating systems. ~ Gz

RE: why would you want a Palm OS at this point?

They can't cancel it.

Microsoft, buying PALM, is using this as their intro.

In the immortal words of Socrates, who said, "I drank what?"

Pay as you go could use a smartphone. I hope Palm gets together with Virgin Mobile USA, who uses Sprint's CDMA network.

Emgadget's been busy reporting about the Centro

RE: Emgadget's been busy reporting about the Centro

.... and it's actually not that much smaller at all!

That's weird. I was under the impression the Centro was a lot smaller than that, yet it looks hardly bigger than the 755p it's next to.