In an announcement at San Franciscos recent Linuxworld conference, longtime Palm OS developers Normsoft have revealed they are bringing their popular Pocket Tunes music player to the Palm Foleo. Mark Belliveau, Normsofts VP of Marketing and Business Development, has provided Palminfocenter with a few details as well as a promotional flyer.

Complimenting Foleos oft-touted instant-on feature, the flyer states, Pocket Tunes on the Palm Foleo combines instant on with instant music. The screenshot on the Foleo shows playback controls clearly derived from the gorgeous Sleek interface of Pocket Tunes 4, and a large three-pane view area for album art, library navigation and the current playlist. 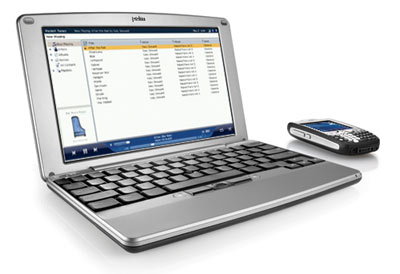 Apart from the similar controls, Pocket Tunes for Foleo will also use all the best features of the handheld version and a new one as well:

The player will use SD cards for the storage of music files. The flyer also states that Pocket Tunes for Foleo will have an API accessible to third-party developers, so that they can use pTunes audio capabilities for their own applications.

One tantalising answer from Mr. Belliveau  although it could just be Normsoft hedging their bets  came here:

PIC: Will it be music-only, or will you expand to other kinds of media as well?

Mark Belliveau: The initial version will be focused on music playback. (emphasis ours)

Possibly hinting that Normsoft may focus on video playback in future editions. When asked which release date they were shooting for, Mr. Belliveau responded: At this time, we cannot disclose what the release date of the product will be. Possibly, this could mean that Pocket Tunes will launch alongside the Foleo and Normsoft are unwilling to disclose the release date as Palm themselves have not settled on a firm date for the Foleo. The software is currently in beta. Normsoft have set up a teaser page here, and will post further news on their blog as they make it available.

I tell you if you are able to do that... you will be what the iTunes is to the mac as you are to the Foleo... and you wil be the music central of not just the Foleo world but potentially the Linux world itself!

How about syncing with an iPod? The Foleo does afterall have a USB connector. It should be possible to play music and video (if the Foleo can handle video) off an iPod through its USB connection. Now that would go a long way towards providing the Foleo with some decent storage, "I'll just use my iPod as a 30GB external hard drive."

^^ That's what I was thinking. Normsoft say music will reside on the SD card, but being able to transfer songs to it from an external HDD or music player would be rather cool.

Oh, and I don't think it'll take too long before we see a video player for the Foleo. I say this because:

1) We now know that it will have a graphics accelerator. (Although which variant of 'Marathon' chipset is unknown - knowing Palm, probably the budget one...) http://www.palminfocenter.com/comments/8779/#135983

2) If the puny 312mhz ARM in the Treo can do DivX and streaming Flash video without complaint (see Coreplayer & Kinoma), then the 415mhz ARM in the Foleo should have no excuse for not providing at least windowed playback. (No fullscreen might be understandable given Foleo's hi-res widescreen display, although not easily forgivable)

3) All the big-name handheld Palm software developers seem to be turning up to the party - it wouldn't surprise me if Kinoma or someone else puts out a Foleo video player sooner rather than later.

Agreed, if they make you take your SD card out of your Treo and put it into the Foleo, that totally breaks the Foleo's "companion" model. This is especially true for the Foleo audience who will most likely be average business dudes that take all technology at face value. (What do you mean my smartphone companion can't see the music on my smartphone? Hope they wrote a pre-nup...)

Pocket Tunes currently syncs with PCs using the Media Transfer Protocol (MTP), which is part of the whole Windows Media shebang. However, Wikipedia reckons that:

The USB Implementers Forum device working group is presently working on standardizing MTP as a fully fledged Universal Serial Bus (USB) device class. When that process is complete, MTP will be a USB device class peer to USB mass storage device class, USB Video Class, and so on.

So, provided that Wikipedia is accurate (chokes off laugh) and this happens in the near future (chokes again), it should be possible.

Hey, the Foleo's running Linux. How long until VLC gets ported over? That might actually be quite cool.

why stop there?? i'd first like to see Firefox, OpenOffice, Gimp, Gaim...

why stop there?? i'd first like to see Firefox, OpenOffice, Gimp, Gaim...

Is Palm going to release an SDK, or are Palm and Linux fans going to have to build it themselves?

Based on the current shareware economy around the Palm ($10-$40 for some program with feature or functionality that frequently arguably should be in the core product), I would expect Palm to continue that trend of providing a feature deficient application stack so that there are copious opportunities for 3rd party software.

Oh, and the announcement with Wind River... That doesn't exactly make me think that Palm is going to open their Linux up and provide firefox / open office / amarok / gimp / opera / thunderbird / vlc / pidgin / xmame / zsnes /etc out of the box.

According to one Treocentral poster (who says he runs an engineering company, but could also be an Internet crackpot ;) ) recompiling Linux apps for the Foleo shouldn't be too difficult:

Apps designed to run as services/daemons or with UIs provided by the terminal will likely require very little, if any, modification. Basically one would just need GCC, any necessary libraries, and the app source. Throw it all on the Foleo and try compiling. If the compile errors out, start asking questions on the appropriate mailing list.

Emacs, for example, is a very popular *nix utility that I'm sure could be compiled to run on Foleo with very little or no modification. Perhaps there is already a binary available.

Given the existance of Xdirectfb (http://www.directfb.org/index.php?pa...ts%2FXDirectFB), it should theoretically be possible to port apps written for X11 to run on Foleo without needing to completely overhall the app.. As you've pointed out, though, there will very likely be some mod needed to comply with the Foleo's unique GUI configuration. Further, I'm sure that hardware may be an issue with apps written for X given that they were very likely designed with mainstream PC type hardware in mind.

So, I guess that means: simpler Linux apps will be easy, complex ones could be difficult but not impossible.

I'm sorry but that simply will not do.

As we all know now having been told so repeatedly right here, an "app" needs a GRAPHICAL User Interface, not a terminal interface, in order to be called an app.

So sorry to offend, SV. So, I'll change my last sentence to read:

So, I guess that means: simple Linux utilities will be easy, complex applications could be difficult but not impossible.

Great, but MP3 streaming only is not going to be enough...

PocketTunes is a great product, but it's *really* about time they add support for streaming Windows Media formats as well. MP3 (and AAC/OGG) streaming is great, but not the format used by a huge amount of online content (particularly the commercial content). I have asked Normsoft about supporting this for almost 2 years now and the seem to indicate it to be a licensing issue (as they already do support local WMA playback). So they need to get on the ball and license the damn thing already?

I like how the Folio naysays get more and more quite with every announcement.

It's called "getting bored", not "changing mind".

I like how the Folio naysays get more and more quite with every announcement.

Your kidding right?
So far I've been thinking "This is all they've got?".
What's the old saying? You can't shine sh.. , but give it to Palm for trying.

I prefer the saying:

You can't put lipstick on a pig.

Why would you need Pocket Tunes on your Treo as well as on your Foleo? Aren't those two devices supposed to be near each other and thus you can just use one Pocket Tunes instead of two?

Maybe you'd want to make a playlist using the big screen. Or use the Foleo's wi-fi for streaming. Or maybe you're using it as a household internet appliance and not as a 'mobile companion'.

I see your point, though.