After over eight months of dealing with the quirks and limitations inherent in any beta software release, Palm has finally posted a final release version of the Palm Desktop software for Windows Vista. This new version is still listed at v6.2 but without the beta tag.

This new build is compatible with Windows Vista Basic, Premium, Business, and Ultimate 32-bit editions. 64-bit editions of Vista are not supported. Windows XP, surprisingly, in both Home and Professional 32-bit editions are supported by this version, but only for users of the new Palm Centro. Another surprisingly supported OS is the XP-based Windows Media Center Edition (a notable first for the Palm Desktop).

Several limitations still unfortunately exist in this version of the Palm Desktop for Vista: 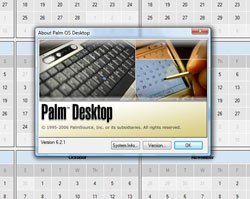 According to Palm Support, Windows 2000, Server, Tablet PC and any 64-bit XP versions are not compatible with this release. Additionally, Palm advises that the Palm Desktop is incompatible with multi-CPU computers such as servers and high-end workstations (multi-core CPUs such as the Intel Core Duo, Core 2 Quad, and AMDs Athlon X2 and Phenom are compatible).

In addition to the aforementioned Palm Centro, the Treo 755p, 700p, 680 smartphones and the TX, Z22 and E2 handhelds are the only devices certified to work with the Palm Desktop 6.2 for Vista. The still-popular Treo 650, despite being a supported device on the previous beta builds release notes, is not mentioned as a compatible device for this release version. The Palm LifeDrive is the newest device to not be officially supported.

Users of unsupported but relatively recent (circa 2004) devices such as the Palm T5, Zire 31 and Zire 72 may still have some measure of success with this release. I have personally tested a Zire 72 (released in 2004) with the previous Palm Desktop 6.2 beta. I found Hotsyncing to be fairly functional despite that device being officially compatible, with the main limitation being an inability to Hotsync photos taken with the Zires camera.

The Palm Desktop 6.2 and HotSync Manager 7 are available free to download from Palm's support page as a 65.2mb zip file, several megabytes larger than the original beta release.

Thanks to WyreNut for the tip.

jeez, was a long wait.

RE: Better late than never.

I've had a Palm since the m125 and then the Tungston T|X and, until now, have been more than satisfied with the quality of the products and the service I have received, whenever I've had a problem.

I now have a Treo 755p and have reached a point of dumping Palm altogether because I recently bought a new TOTL HP system with Windows Vista Ultimate 64-bit and find myself out of luck at the office.

At home I've taken to sync'ing with Bluetooth, which has been more or less successful. Sometimes I have to reboot the computer to get it to work. Here at my office, it's a different story altogether.

If Palm is going to leave us Vista 64-bit users forever out of the sync'ing loop, I need to know it.

My contract for Verizon is goming up soon and I need to decide whether or not to stay with Palm, or leave for Blackberry or some other system that will relieve me of the hassles I currently have with trying to synch.

Does anyone know whether or not Palm will be accomodating us Vista 64-bit users or are we forever to be ignored?

Stephen in San Francisco
If I can't dance, it's not my revolution. - Emma Goldman -

The Beta Has Been Working Just Fine

So far my Treo 680 and Palm TX have worked just fine with the Beta version so I was pretty content to wait.

Yeah, exactly!
Wait for, that stuff which worked for nearly 10 year, now doesn't!
Great work Palm!
Keep working hard, and soon we don't have to look at anymore of your failures.

You could always get a WinMob device. At least you wouldn't have to whine about it so much since PalmOS is such a crappy Operating System.
...Right? <_< >_>

As a Windows XP user, who does not sync with Outlook (and still uses the Palm Desktop app for calendar/notes/contacts), then is there ANY benefit to upgrading? The only thing listed under "Whats New" that might be of interest is:

... and I'm not sure what that means. I guess this would allow me to continue to sync with my old Visor?

Seems like a big step backwards in many respects... No color coding? Really? Why?

BTW, I am using a brand new Centro, which came with Desktop 4.2 / Hotsync 6.0.1. Am I missing something? And will the old version remain available?

for a while my computer crashed when trying to sync my Palm TX with Windows XP Media Center edition, even though previously I'd had no problems. The problems carried over to syncing with the Centro - so I haven't been able to sync the Centro at all.

Does anyone know if the update to the Palm Desktop would also mean that the PALMUSBD.sys driver has been modified? I'd download the new version in a second if it would solve my sync problem.

(Note - per the Palm website, the Palm driver is not compatible with Win XP Media Edition. however, i synced my TX with WIN XP ME for about a year - i think one of the Windows Updates must be what is causing my problem.)

Seems like a big step backwards in many respects... No color coding? Really? Why?

>> I bet it must be Access and Palm, Inc. issue since this palm desktop is by Access. They won't care what Palm did anyway. In contrast, Palm themselves should add this feature before releasing to public.

Embarrassing... these guys want to make use believe they'll deliver a whole new mobile operating system, yet they can't get a trivial desktop application to work properly one year after Vista went GA?

Come on, how hard can it POSSIBLY be to show birthdays and anniversaries? Is it that difficult in Vista apps (compared to, say, XP) to color-code cells?

Or did you eliminate the desktop developers in one of the many rounds of layoffs and then sent your marketing intern to an evening C++ class at the local community college to fix this up?

Here's another question... Sure Vista support took a while for a lot of applications. However, many other packages worked right out of the box. Vista adds more security and DRM to the mix, but I suspect that if you wrote your applications in a way that was officially supported by MicroSoft you didn't run into to many problems.

So I'm wondering what the hell was Palm doing behind the curtain with the Desktop before? The system doesn't appear to be to complicated. Everything is stored in a mostly flat file structure and then pushed back and forth via USB, bluetooth or even a network connection (I had this set up for a while just to try it). They must have kludged something to make it work, and that loophole is no longer supported.

I guess it's likely that they continued to use the same code base from the 1996/97 desktop. I got my first Palm Pro back in '97 and although I haven't tried it I could probably plug that sucker right in and sync with the current desktop, that's neat but hardly a way to show that you've got cutting edge software.

What makes the huge delay/shortcomings of Palm Desktop for Vista is the fact that Palm has supposedly been working closely with M$ for "years" for customizations & tweaks to WM5 (remember all of the hoopla when the 700w launched?)

So if that is indeed the case you'd think could have at least been on top of things in regards to Vista...after all, it's not like they didn't have AMPLE warning that Vista was going to succeed XP.

I really doubt that there are any major technical hurdles to overcome. This is just another shining example of Palm's arrogance/hubris/greed/stinginess/laziness. Much like wi-fi, voice dialing over Bluetooth, 3G on GSM, integrated GPS, larger-than-4gb storage cards, USB 2.0 Hostync speeds, 3.5mm stereo headphone jacks, screen resolutions higher than 320x320 and so on, Vista is another example where Palm just buried their head in the sand and hoped to fool theis customers with smoke'n mirrors. Essentially, Palm keeps on hoping that they will somehow be immune to the march of technological progress and, in this case, that everyone would stick to 32-bit XP Home & Pro ad infinitum.

Well the Palm Desktop is now called "Palm Desktop by ACCESS" so while Palm has been working with Microsoft, they also have to work with ACCESS in order to get things to work on the desktop. You do know what they say about too many cooks?

I would suggest Palm to open-source their Palm Desktop, if it's legal for them to do so.

It looks like this has Outlook 2007 support, so that's probably the biggest change.

I selected Z22 when I went to download Palm Desktop 6.2-and it is supported in XP it seems.

No support for older Palms

The new version of Palm Desktop has at least one other major shortcoming: it does NOT support anything but the latest Palm devices. My trusty (albeit crusty) old m505 still works great and meets all of my modest needs. Having just bought a new laptop running Vista and installing a 4.x version of Palm Desktop, I was rather dismayed to discover that I could no longer install anything to my m505 during a HotSync. Both the Install tool and the QuickInstall utility are completely broken under Vista. And the 6.2 version of Palm Desktop does not support my m505! How hard can it be to patch a small install utility for Vista compatibility? If they are not going to support my device with the new version, I think they should at least patch the old version so that I can at least use it.

When I upgraded to the new software, I lost a bunch of info. So I had to delete the new software and go back to Palm 4.1 to get my info back. Problem is that my Zire 72s does not sync via USB cable anymore (I have Vista and while it never should have worked via USB cable, it did.). I also cannot get it to sync via bluetooth/wirelessly. Any thoughts? Should I buy a new Palm? If so, which one would you recommend. My main use is as a contact manager for customers/prospects/friends. Or should I buy Outlook 97? Will the Zire 72s sync to Outlook 97 via USB cable?

Simple fixes (that the Palm guy didn't tell me)

After installing Palm Desktop 6.2 I was mystified because all I could see on my computer screen were the sample photos that came with my Palm Tungsten E2.

After about an hour on the phone, letting the Palm guy tell me what to do I thought I had it fixed only to find I didn't when I next opened the program.

The simple fix is to run Desktop 6.2 as administrator (left click the icon and then choose Run As Administrator).

It was a good thing I had backed up nearly all my data or it would have been lost in the hard reset I did before I call Mr. Palm.