Palm has just released a new ROM update for the Sprint Treo 755p. Palm's support page for this update, referenced as ROM version 1.07, is surprisingly short on details, even by Palm standards. The entire list of improvements in this version states:

"This software update is a tune-up that improves audio, stability, software quality and device usability."

Though we can only speculate without any release notes or details, It's possible that some lingering bugs left over from the 700p-era OS in the initial 755p ROM are addressed, perhaps bringing the 755p closer to Centro levels of performance and reliability. Whatever the specifics, this update is certain to be welcome news to Treo 755p users who feel they have forked over considerable more money for a "forgotten" device that has been left in the dust as Palm focuses the majority of their attention on the newer, flashier, and much cheaper Centro. 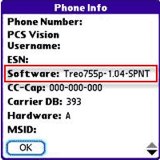 Palm's new 1.07 update for the Sprint 755p is approximately 18.4 megabytes in size and is available in both Hotsync and SD-based installers for Windows uers. Mac users are required to perform the memory card-based install method. Palm advises that the update will take 45 minutes to complete.

The Sprint Treo 755p launched in May of 2007 and the device was recently been rolled out on the CDMA networks of Alltel, Canada's Telus and most recently, Verizon Wireless.

Someone take a crack at this one and report back to us what it fixes/changes, please!

Its 1:30 in the morning, I just finished the update, and yes it takes a while. The actual update itself took me 30 minutes, but this was my 2nd attempt as I screwed up the first. That does not include the time it took to back-up and re sync all the info.

So far the only thing new I found were some yellow and green arrows added to your main text message window.

One interesting note, is that when updating, the screen flashed "updating modem." I use my Treo's data connection with PDAnet, as i sit in airports a lot. I hope this doesn't affect the program.

I had another, interesting experience with this update. I was having trouble with once-daily resets ever since I updated to Butler version 4.51 (checking their site now, the current version is 4.67). I never figured out exactly what was causing it....perhaps a conflict between their new keyguard and maybe BackupBuddyVFS scheduled backups? Anyway, I haven't had a reset since I installed this update. She was very stable before I updated Butler and has returned to that state (so far).

I also made it work on 700p, see the TC forums etc for details

Might want to ...you know...wait for it to be wrung out

strongly suggests less-than-stellar-ness for the update. IMHO, the lack of description about the update suggests lack of knowledge/people to describe the update as well.

In any case, IMHO and if I had a Treo 755p, you can bet I'd hold off a month or two before jumping.

YMMV, of course, though I certainly don't know why!

[in general, whenever anything I own has a software update, I grimace and immediately install it without even checking to see what it supposedly "updates". Palm's recent PalmOS-device update history, however, would keep me from doing that totally]

Well, aside from less-than-stellarness, this update goes along with some menu screens found in the 680 and Centro (the previous 2 newest POS devices) that suggest Palm has (as in the past tense) or is still attempting to shoehorn A2DP Bluetooth wireless audio functionality into Garnet. I'm going to do a news item on it.

But even without Softick AG installed, a clever user found the same hidden BT Audio screens on those other two devices. So either Palm gave up trying to hack A2DP into Garnet and buried it under lines of code or it's still a work in progress to be released later this year as a going away gift to all the loyal POS fanbase (hah!)

The "there one moment, gone the next" appearance/disappearance of the pertinent dialog suggests PALM has the lower level functionality completely enabled and uses some sort of function-pointer-like data structure to invoke it (that is, data can be trivially changed while functions usually cannot).

Anyone have any idea if this exposes the API needed for the My Location feature in Google Maps? I believe palm said they would be doing that for recent models. *crosses fingers*.