Rumor:After debuting last October on Sprint, the Verizon version of the Palm Centro looks set to finally hit the market. The Centro's delayed-but-anticipated arrival on Verizon comes over four months after the previous release of the GSM Centro to various carriers worldwide.

Engadget Mobile is reporting that the Verizon version of the Palm Centro is rumored to be in store for an imminent release on Friday, June 13th. Verizon's late appearance at the Centro party is nothing new, as the CDMA giant has almost always lagged behind other carriers in offering the latest handsets, with Palm OS-based smartphones nearly always appearing on Verizon six months after their Sprint launch.

Unfortunately, if Engadget Mobile's initial report is correct, the Verizon Centro is going to be priced at a staggering $270 with 2-year contract. Customers electing to go with a 1-year contract will pay $340 for their Centro, with the full retail price being only $50 more at $390. A $70 mail-in rebate looks to be offered for the Centro regardless of the purchase method. Of course, Verizon may tack on an "instant rebate" to knock another hundred dollars or so off the price in order to make the Centro somewhat more competitive with Sprint and AT&T's already substantially-reduced pricing. 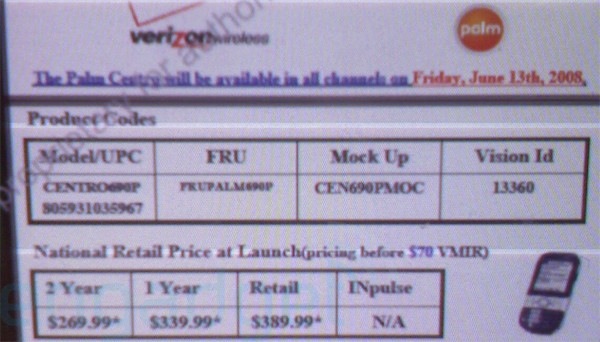 Verizon's version of the Centro is reported to be offered only in a dark metallic club color scheme, similar to the device's single color scheme offered to Mexican wireless carriers. No word if the device will feature any hardware or software enhancements to justify its higher pricetag over competing carriers' versions of the device.

Additional pricing information including the device SKU has been posted to HowardForums as well. The reported SKU and prices are listed as:

The poster also claims a $100 credit will be available when purchased with a data plan. That incentive would likely bring the total to the more usual $99 range that other carriers have been offering.

"The poster also claims a $100 credit will be available when purchased with a data plan."

I better see a total price of $99. Plus, I don't think its fair that a data package is required for the rebate. Why doe Verizon feel the need to be difficult.

So they can get more $$$ per user! VZW has great coverage, but you paid for it and they are so slow to add new phones!

tell me about it. if most of my family wasn't on verizon, so i can keep a cheap phone plan, i would switch....

I just checked Verizon's site and did a search for Centro which pulled a list of accesories for the Centro. No phone yet, but maybe by Friday. So I guess this is actually going to happen. I sure hope they're planning another rebate to bring it down to $99.

That actually has been the case for at least a couple weeks.

Are we excited yet?

It's out for VZW now (unofficially)

They've just started arriving in customers' hands who were able to convince a telesales rep to place their order ahead of time.

Personally,I think VZW is hardly gonna be bothered to push this thing very aggressively. They barely acknowledged the 755p and will likely do the same for this guy.

I mean, if the VZW version was comparably priced or just a few bucks more than the Sprint version I'd definitely go for it just for the reduced amount of bloatware & VZW's better coverage...but otherwise, I would be unlikely to pay $170-$270 out the door (before the MIR that most likely will never materialize) when BestBuy has been selling both AT&T and Sprint Centros all day long for <$50 w/ contract out the door and with no MIR to fool with. And anyone who is serious enough to pay full retail/unlocked price for a Treo or Centro is probably better served by getting an unlocked GSM version with its greater flexibility instead.

"before the MIR that most likely will never materialize"

A few months I got wife n kid new phones, VZW MIR came back in a few weeks.